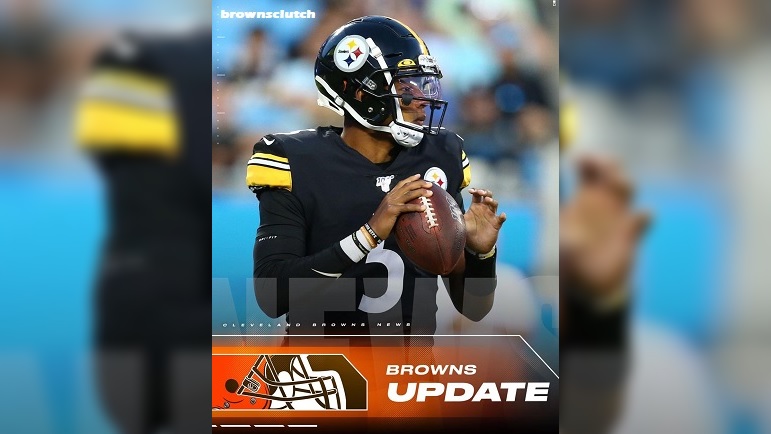 The Cleveland Browns’ quarterback room looks night and day different than the one last year. While former starter and 2018 #1 overall pick Baker Mayfield is still on the roster, it’s clear the team has moved on from his tenure with their addition of Deshaun Watson during the free agency period. They also signed Jacoby Brissett to back up Watson, and they recently added their presumed #3 in ex-Steeler Josh Dobbs.

Earlier this afternoon, he sat down with Zig Fracassi and Alex Marvez of NFL Rewind on Sirius’ NFL Radio to talk about the whirlwind that is free agency.

“Yeah it’s definitely been a process for sure, “ Dobbs said. “Free agency can definitely be that. Getting up to New England was a great visit as well as Baltimore. Those were two great visits. In talking with Cleveland, it’s a tremendous opportunity as well as a really, really fun room to be in and a really, really talented team. It’s a little weird of course, you play against them every year in the league being in Pittsburgh and now you’re a Cleveland Brown, of course but I’m excited about the opportunity. I’m excited about the future. I know just getting a chance to watch Stefanski’s offense, I’ll be excited to dive into it and play in it as well, and contribute however I can to help the team win.”

Originally a fourth-round pick of the Steelers in 2017, the team traded him to the Jaguars in 2019 before bringing him back off waivers in 2020. Dobbs appeared in six games for the Steelers and throwing just a handful of passes. He’s still searching for his first career touchdown pass.

Now, he’ll be lacing up the cleats for a division rival, and one thing led him to them more than the other teams that courted him – opportunity.

“When you get that opportunity, making the most of it, and I’ve done that thus far in my career, when it’s been limited, but I’ve been able to capitalize on those opportunities and I’ll do the same thing there,” Dobbs said. “And not only that, it’s been well-documented the type of person I am in the QB room, helping contribute to whoever’s in there with how they see the game, what I see on the sideline and contributing whatever I can to help the team win. So, I know my skillset fits that offense, that scheme very well and I know that given my opportunities, I’ll be able to go in and execute and play at an extremely high level.”

Dobbs signed a one-year deal with the Browns where he’ll battle for a roster spot, just as he did in his final years with the Steelers. Like Pittsburgh, it’ll take injuries for him to see the field.