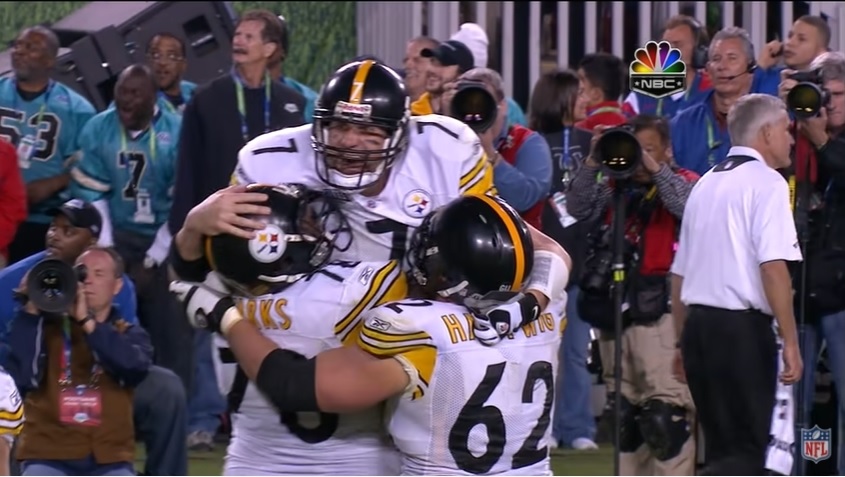 For a player with an 18-year career like Ben Roethlisberger, he had a lot of moments. Highs, lows, everything in-between. But two stick out above all others. Speaking at last month’s Ignite Conference, Roethlisberger was asked for his favorite NFL memories.

The two? His tackle on Colts’ DB Nick Harper in the 2005 AFC Divisional Game and his Super Bowl winning touchdown to Santonio Holmes.

“One was in my second year in the league,” he told the group. “We were getting ready to make a Super Bowl run and we had to win the last couple games to get into the playoffs. We found a way to sneak into the playoff We go to Cincinnati, win that game, which we weren’t supposed to win. And then we go to Indianapolis and I think everyone knows what I’m gonna talk about. You give the ball to Jerome Bettis on the goal line. Jerome never fumbles. He never does anything but be great. I pulled the Cardinal Sin, if there’s any quarterback coach or football coaches out there. I didn’t carry out my fake. Hand the ball off, you get yelled at for not carrying out your fake. I didn’t carry out my fake.

“And it was a good thing because I turned around to watch Jerome score because I knew Jerome was gonna score a touchdown. And it was slow motion. As I turned that ball just popped out and it was just kind of like ‘oh no, oh no.’ And I thought, ‘okay, I can get, I can get it.’ But it bounced perfectly to one of their defensive backs.”

Colts’ linebacker Gary Brackett met Bettis on the goal line and popped the ball loose. It took a bounce into Harper’s hands, who seemingly had nothing but daylight ahead of him. Pittsburgh was leading by three late in the fourth quarter, and a scoop-and-score touchdown would’ve given the Colts the lead, and likely, a victory.

Knowing Roethlisberger was the last man standing, he said his goal was to find someway to slow Harper down.

“Then I’m like, okay, I have no choice but to start running backwards…soon after that I realized I was the fastest guy on the Steelers and that’s not good either.”

Pittsburgh had employed their goal line package for the play, having nothing but offensive linemen, tight ends, and Bettis (now on the ground) along with Roethlisberger. If he wasn’t making the tackle, no one was.

“Then it just turned into, ‘okay, he’s a better athlete. He’s faster. He’s gonna me look silly. So I just have to find a way to outsmart him or try.’ So I kind of turned, I started running…he had the whole field. If he would’ve cut across the field, I had no chance. But I was able to kind of keep him close enough. And then it’s like, it’s now or never, it’s just go. And so just try and slow him down and hope someone gets there and I was able to enough of the foot to get him on the ground.”

Roethlisberger got Harper to turn back inside and made a shoestring tackle just outside the Colts’ 40-yard line. Still a disastrous play for the Steelers, but Roethlisberger’s tackle gave Pittsburgh a chance to preserve the win. The Steelers forced Indianapolis to settle for a 46-yard field goal, and the normally perfect Mike Vanderjagt hooked it way wide right, sending the Steelers to Denver, and eventually, Detroit, for their fifth Lombardi Trophy.

“Usually quarterbacks most favorite plays aren’t tackles because usually it means you throw an interception and you gotta go tackle. Then that obviously got us to Detroit to win Jerome’s Super Bowl which is what we all wanted to do because Jerome was so special in his hometown. So that play was pretty special obviously.”

Roethlisberger’s other favorite play is remembered better by the NFL’s history books. His game-winning touchdown pass to Santonio Holmes in the right corner of the end zone to beat the Arizona Cardinals in Super Bowl 43. A moment Roethlisberger said he always dreamt of.

Roethlisberger’s TD is one of the best in Super Bowl history. Arguably the best pass in a game of that magnitude. And it brought home the Steelers’ sixth trophy.

They’re two plays you’ll see again and again in reviewing Roethlisberger’s career. And the football world will see them again in Canton, Ohio in 2027 when Roethlisberger is inducted into the Pro Football Hall of Fame.