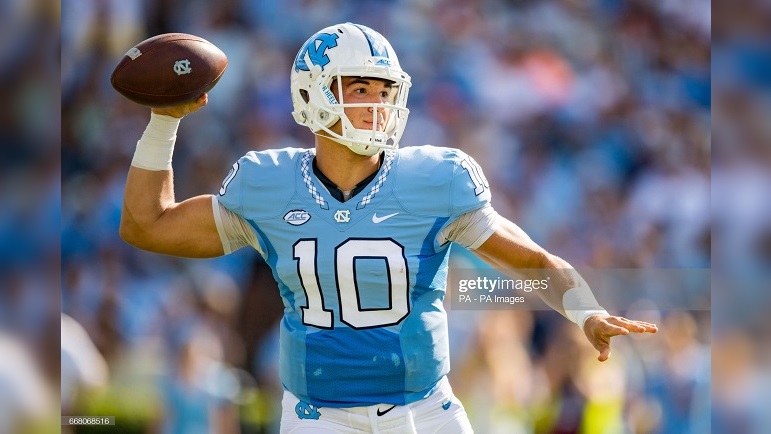 Today I wanted to look at yet another angle of this year’s quarterback prospects, third and long performance. This situation will be defined as third and seven or longer and I will include first round picks since the 2016 college season and 2021 Pittsburgh Steelers that could return in 2022. The first graph looks at the players completion percentage as well as their catchable percentage, which excludes spikes, throwaways, and miscommunications and includes defensed accurate passes: 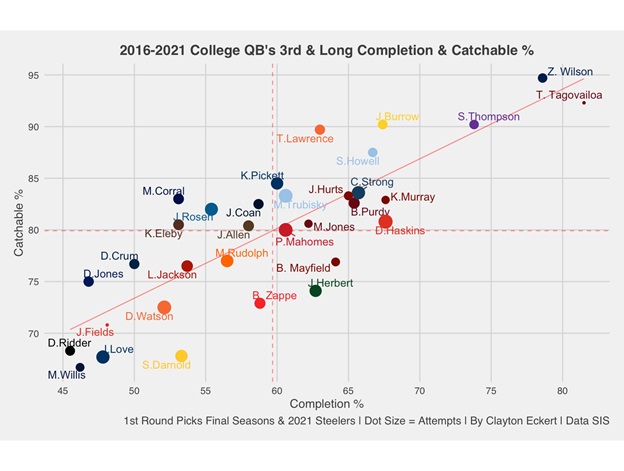 A healthy amount (15) of 33 players land above the mean in both data points, we see some interesting names on the top right highlighted by BYU quarterback Zach Wilson and Alabama quarterback Tua Tagovailoa on fewer attempts. 2022 prospect Skylar Thompson fared well in these circumstances along with LSU quarterback Joe Burrow being the final player with an above 90 catchable percentage. Clemson quarterback Trevor Lawrence lands closely behind with a lower completion percentage, followed by North Carolina quarterback Sam Howell with a more respectable completion percentage.

The remaining quarterbacks above the mean begin to clump up, including Pittsburgh’s Kenny Pickett, Nevada’s Carson Strong, Oklahoma’s Kyler Murray and Jalen Hurts, North Carolina and newly acquired Steeler Mitch Trubisky, Iowa State’s Brock Purdy, Alabama’s Mac Jones, and Texas Tech’s Patrick Mahomes. Dwayne Haskins is also included but with recent tragic news of his death and with respect and condolences to the many that are grieving the human being, I will refrain from discussing him as the football player.

Three out of five players on the top left are eligible for the upcoming draft, Ole Miss quarterback Matt Corral, Notre Dame’s Jack Coan, and Western Michigan’s Kaleb Eleby along with Wyoming’s Josh Allen and UCLA’s Josh Rosen. This group threw higher catchable passes with lower completion percentages, hinting that their play was stronger than their team’s results and comparative to the teammates of the above the mean players. On the other side of the coin, Oklahoma’s Baker Mayfield and Oregon’s Justin Herbert had above the mean completion percentages with stronger team support but were below the mean in catchable passes (accuracy).

Current Steeler Mason Rudolph, formerly of Oklahoma State, lands below the mean in both data points along with other interesting names: especially Louisville’s Lamar Jackson and Clemson’s Deshaun Watson. 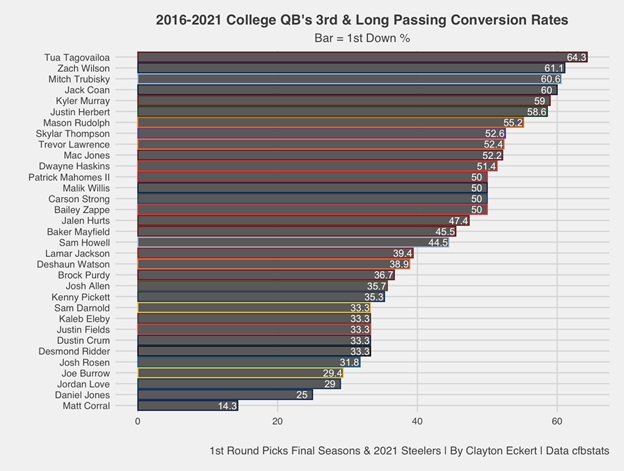 Tagovailoa and Wilson top another chart with impressive results thus far! Trubisky impressively ranked third in this regard, followed by Coan who is the top ranked prospect in the upcoming draft and the final player with a first down percentage above 60!

Murray and Herbert land close behind with strong results as well, then after a drop off we see Rudolph with the seventh ranked first down percentage! The next group has percentages in the lower 50’s, and fun to see how the 2022 prospects stack up to the historical view highlighted by Thompson and followed by Willis (on the fewest attempts among all players), Strong, and Zappe who are all tied at 50%!

The following players had first down percentages above 40: Hurts, Mayfield, and Howell. A high number of players (11) landed in the thirty range, and the 2022 prospects include Purdy, Pickett, with Eleby, Crum, and Ridder tying and converting only a third of the time.

Surprisingly, Burrow heads the group of three players with percentages of 25 or above along with Duke quarterback Daniel Jones and Utah State quarterback Jordan Love. After a big drop off, Corral lands at the bottom of the results at a low 14.3%, interesting context after seeing his above the mean accuracy and lower completion percentage!

Now for touchdown and interception percentages: 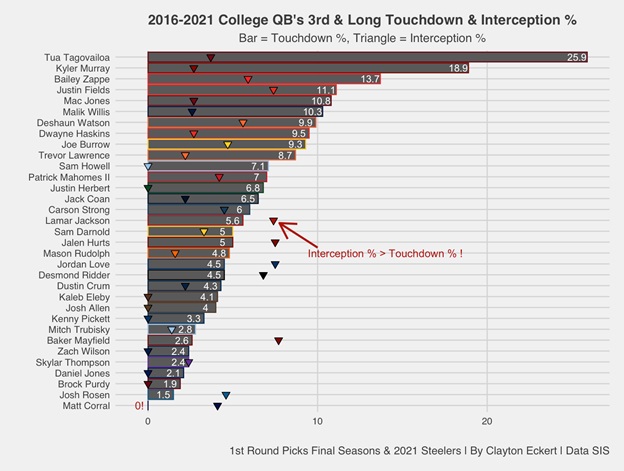 Once again, we see the name Tagovailoa at the top of another chart with an outstanding touchdown percentage! He is seven percentage points higher than Murray, whose result is also impressive! The top ranked player in the upcoming draft is Zappe, and interesting to see his higher interception percentage of the top three.

One of the biggest takeaways from the visual was seeing the players who had higher interception percentages than touchdown percentages. These players were Jackson, Hurts, Love, Ridder, Mayfield, Rosen, and Corral with the latter also having no touchdowns!

Next, let’s layer more context with who saw more pressure along with sack percentages on third and longs: 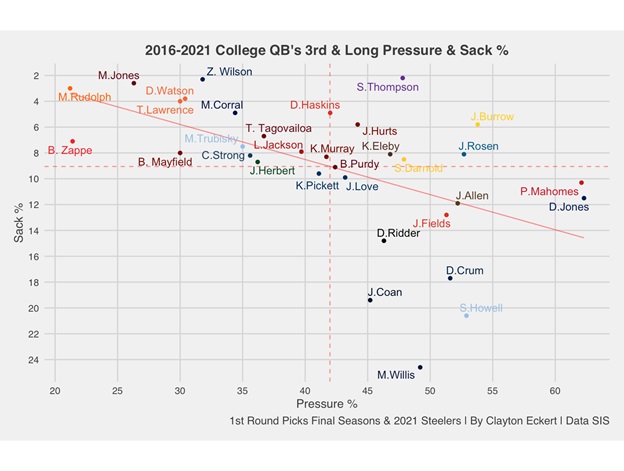 In previous studies Howell has been the most pressured quarterback of the prospects in this year’s draft, and the third down numbers are no different. With the historical view, we can see the players that were pressured at a higher rate were Daniel Jones, Mahomes (above 60%!), and Burrow. Howell took the most sacks by far of this group, pairing great context to their previous results. The only player that had a higher sack percentage is Willis, four percentage points higher than Howell while only being pressured at the ninth highest rate! Also, five of the six most sacked quarterbacks are 2022 prospects!

Six players landed above the mean in both data points: Burrow, Rosen, Thompson, Darnold, Hurts, and Eleby. These players were pressured at an above average rate and fared well not taking sacks comparatively in critical drive sustaining (or ending) situations! We can also use the top left to see who faced below average pressure and weigh this information when considering all the results. For example, Rudolph was the least pressured quarterback along with the fourth lowest sack percentage, debatably aiding in his high ranking (7th) in the first down conversion numbers and discouraging context to his below the mean accuracy results.

To close, here are the players yards per attempt which is obviously a huge factor to pick up the necessary yards in the situation, along with their expected points added (EPA): The total of a player’s EPA responsibility on passes using the Total Points system that distributes credit among all players on the field for a given play. Totals are scaled up to map to the average points scored or allowed on a team level, with the player’s snap count determining how much to adjust. For passers, this includes accounting for offensive line play, sacks, off-target passes, dropped passes, and dropped interceptions: 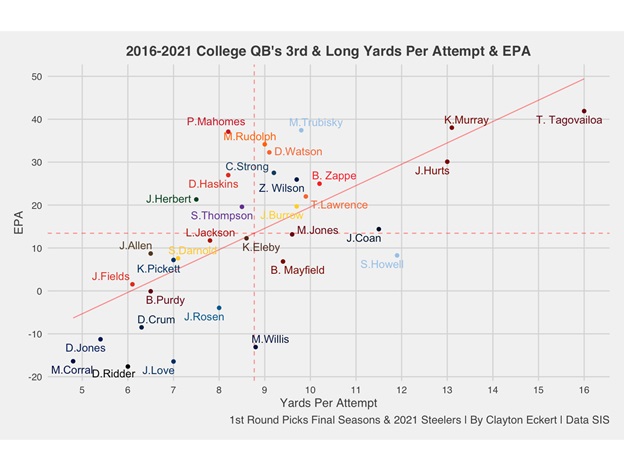