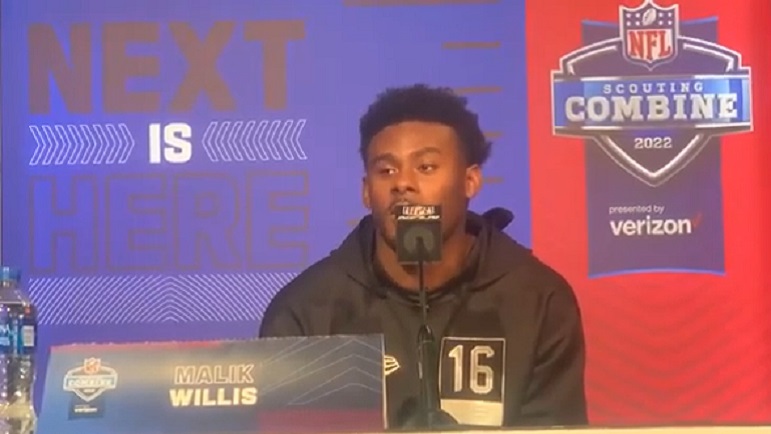 Are the Pittsburgh Steelers really as smitten with former Liberty quarterback Malik Willis as the major media would have you believe? While it’s hard to know for sure at this stage of the 2022 pre-draft process, Willis seems destined to be a quarterback linked most to the Steelers until the actual selection process gets underway in Las Vegas, NV.

“The buzz down there in Mobile at the Senior Bowl was that the Steelers seem to be smitten with Malik Willis,” NFL Network draft analyst Daniel Jeremiah said in an appearance on the Rich Eisen Show earlier this week. “A lot of times it’s like when you fire a coach, you hire the opposite. I think we can see a little bit of that too when you change quarterbacks. It doesn’t get any more opposite than going from Joe Flacco to Lamar Jackson. So, you stay inside the division, you go from Big Ben [Roethlisberger] to Malik Willis, you get a lot more athletic. And Kevin Colbert does what Ozzie Newsome did on the way out the door, is leave the next guy a quarterback to go forward with.”

With the 2022 NFL Scouting combine now underway this week in Indianapolis, Willis certainly will have a lot of eyes on him and not just Pittsburgh eyes. On Wednesday, Willis held his combine media session and during it he admitted that he’s talked to several NFL teams while in Indianapolis.

“I met with a lot of them [teams],” Willis said on Wednesday. “I’m sorry, but I can’t remember them all, not all of them.”

Willis was asked if he had specifically met with the Steelers and additionally, what he thinks of the organization and potentially replacing a Hall of Famer like Ben Roethlisberger.

Willis was then asked if he believes the Steelers would be a good fit for him.

“I’m not sure,” Willis said. “I don’t know. I don’t know enough about their offense. I mean, I met the coaches and I really, you know, I can get behind that. I mean, they’re good people and I feel like all these coaches have information they can pass on to me and help me get better. But I wouldn’t have a clue.”

While Willis didn’t really disclose too much about team’s interest in him during his Wednesday press conference, he did reveal that he will not be running the 40-yard dash or doing any other on-field drills while in Indianapolis at the combine. Instead, Willis seemingly plans to take care of those things at Liberty’s Pro Day later in the month. As far as what he will be doing at the Combine this week, Willis said his plan is to throw some.

“I just came to compete,” Willis said on Wednesday. “I mean, it is what it is. You can think whatever you want to. Everybody deserves their opinion. I just came to throw against these guys that’s going to be here.”

The quarterbacks will hit the field of Lucas Oil Stadium on Thursday, and Willis will obviously not do much more than some throwing, and that’s understandable with him being considered one of the top quarterbacks in this year’s draft class. After the combine ends, expect Willis to continue to be the most popular quarterback mocked to the Steelers until the actual draft takes place.