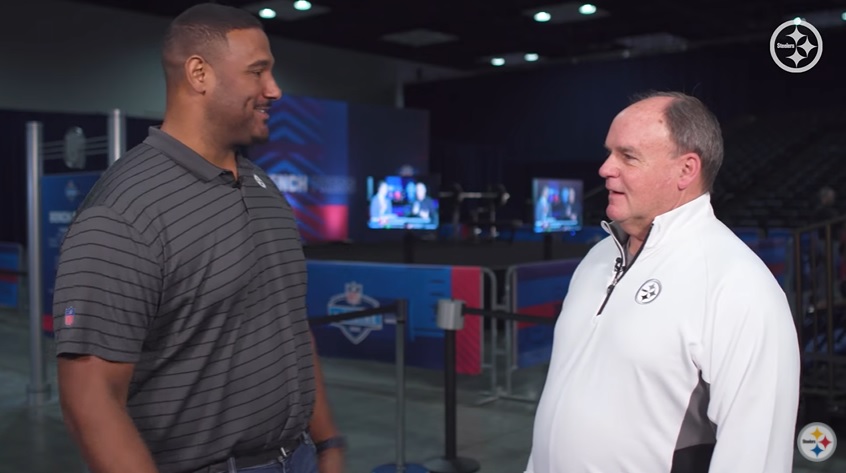 In the NFL’s never-ending quest to always dominate the sports cycle, in-season or not, they’ve turned the Combine into a marquee event. Decades ago, it was just for those who worked in the NFL. The scouts, the coaches, of course the players, and maybe you’d read a nugget or two of information in the newspaper about it later that week.

Fast forward to today and it’s nearly as revered as Super Bowl week. Hundreds of media members attend with cameras nearly outnumbering prospects, capturing the event from every angle possible. Every drill, every measurement, everything is under the microscope from the outside world. But for those like Kevin Colbert who have been on the inside for 30 years, the event hasn’t changed much.

Colbert spoke with Steelers.com’s Max Starks to talk about what ways the Combine has evolved over the years. And what ways it hasn’t.

“From a football perspective, not a lot [has changed],” he told Starks via the team’s YouTube channel. “From the media, the interaction with the fans, fans in the stadium itself, we’ve seen that grow over the years. And we understand it, it’s a big event. It’s a big event for our league.”

The NFL has attempted to increase viewership in recent years, shifting the on-field workouts from early in the morning to the afternoon and running throughout primetime television. This year, drills will take place starting at 4 PM/EST and run through 11 PM/EST. All in an attempt to show the league’s next great players to as many eyeballs as possible.

Of course, the existence of people like – well, us – have only heightened the interest and intrigue in the Combine. We’re the ones dissecting as much information as possible and the rise of analytics, like Kent Lee Platte’s RAS Score, have given us more info to work with.

Colbert has been attending the Combine for nearly its entire existence. It began in 1982 with Colbert breaking into the NFL as a BLESTO scout (one of the two national scouting agencies) in 1984. He’s presumably been at the Combine every year since, sans its 2021 cancellation. The fact he’s being interviewed by Max Starks, a 2004 Combine attendee Colbert drafted and man who’s been retired for nearly a decade, is proof enough of how long Colbert’s been at it. But through the glitz and glamour, Colbert doesn’t want to lose sight of the Combine’s real purpose.

“We never wanna lose perspective on it’s an evaluation tool for the personnel folks, the coaches, the GMs, the scouts. We don’t wanna lose that perspective. But it’s grown and good for the game, but we still wanna hone in on what we need to get done this week.”

For the Steelers, that means getting baseline testing on these prospects on a level playing field. Everyone tests at the same place, runs in the same stadium, on the same timetable. There is no concern or consideration for the guy who gets to workout in Alabama’s Mecca-like facility versus the Division 2 kid running outside on a cold, windy day.

As always, the Combine’s two most important components are not televised. The interviews and the medical. How players perform there impacts their draft stock as much as anything they do on the field.