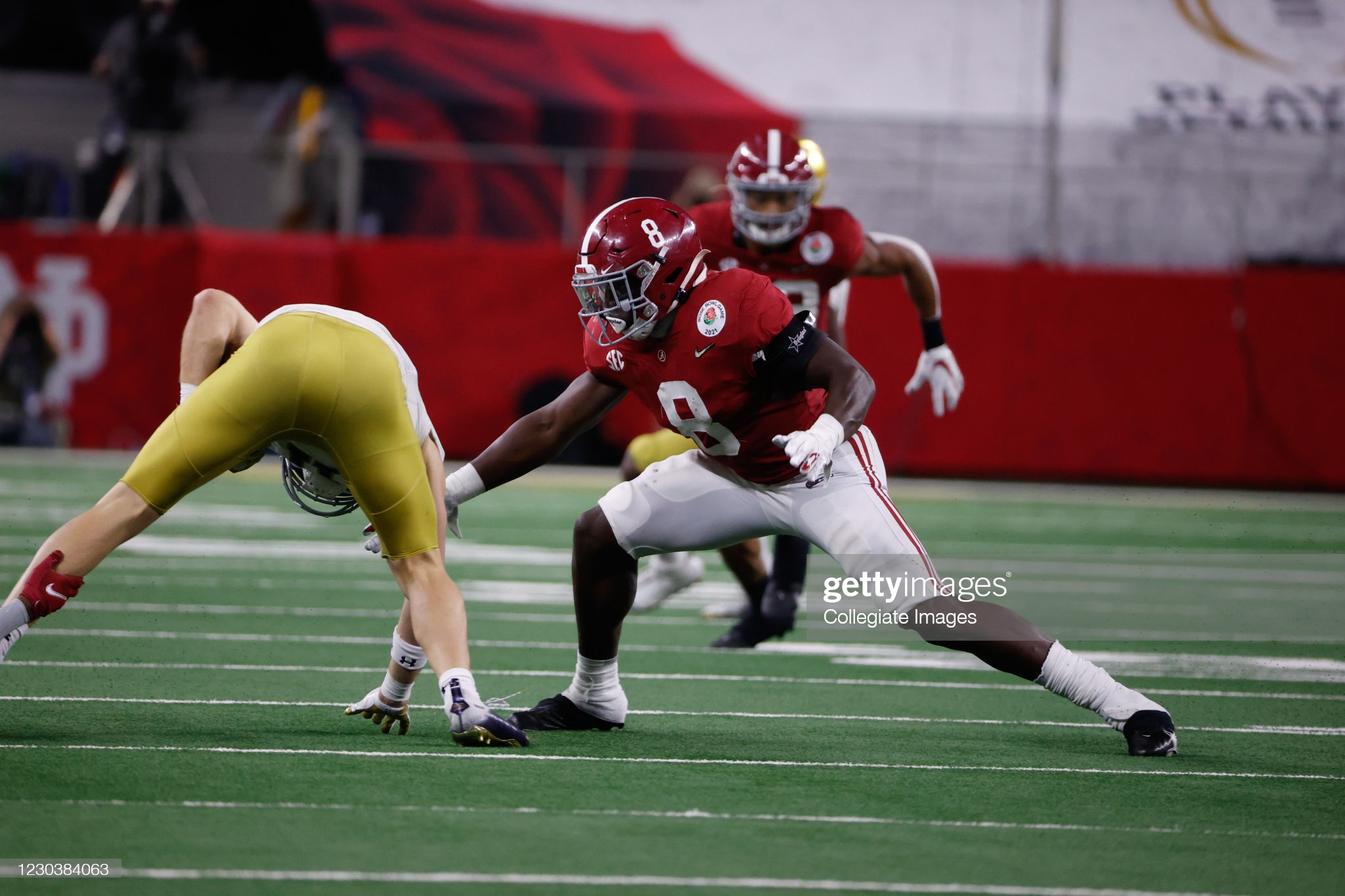 As the defensive line left the media interview session, there was a small break before the linebackers came in for interviews. One on the main gays I looked forward to speaking with this groups was Alabama LB Christian Harris. A true junior, Harris couldn’t attend the Senior Bowl where I was able to speak with plenty of the other top LB prospects that may likely be in play for the Pittsburgh Steelers.

Prior to the start of the 2021 season, Harris was often seen as a frequent selection in the first round of mock drafts, being touted as the next great off-ball linebacker to make that transition from the SEC to the NFL. However, Harris saw the hype surrounding him earlier in the season fall off and give way to names like Devin Lloyd and Nakobe Dean who have been seen as the top LB prospects in this draft class by many.

I had the opportunity to complete Harris’s scouting report prior to the Combine, so I already had a good feel for him as a player. Harris is an exceptional athlete that can run sideline-to-sideline against the run and blitz up the middle, but also is well-versed in coverage, having a DB background back in high school. Still his instincts and his ability to read and diagnose plays effectively came off as a concern, seeming slow to mentally process what was happening in front of him. I was intrigued to see what his personality was like and see if he would address those issues as well as talk about anything Steelers-related.

CH: I’m doing good. How are you doing?

JH: Yes, sir. Yes, sir. How’s everything going with interviews and stuff like that?

JH: Yeah. I’m sure you have a lot more meetings coming up. Have you had a few meetings already?

CH: I have had all my meetings already.

JH: You’ve had them all already? Did that include all your formal meetings with teams?

CH: Yeah, I had all my formal meeting when I just got here and the rest of them the next morning.

JH: Yeah, did you feel like any of those went really well, where you walked out and It’s like, “Man, that really I feel really good about that.”

CH: I enjoyed them all, to be honest. I mean, any chance you get to talk to an NFL team and somebody that has any interest in you is pretty exciting.

JH: Have you met with the Pittsburgh Steelers for one of your meetings?

JH: Did you sit down and talk to coach Tomlin and those guys there?

CH: Yeah, I sat down with Coach Tomlin and the staff.

JH: Did you get any impression of Coach Tomlin as a coach or any other support staff?

CH: I mean, I love their staff. I loved everyone’s staff that I met with honestly. I felt like we got along pretty well and were able to talk about some good things in that meeting with them.

JH: Do you think that coming in as a true freshman and starting games for the Alabama Crimson Tide and then being a starter for three years really speaks to you and your ability to come in and put yourself into the fire as you go into the NFL?

CH: I think it just goes to show how much of a competitor I really am. Regardless of the circumstances and regardless of what I’m asked to do, I am going to come in and compete every single day because that is what will be expected of me.

JH: Christian, you talked a little bit about your ability to play in coverage, and from my understanding, you played a little bit of safety coming out of high school and then going to Alabama to play LB. How do you think that benefits you, not only been that sideline-to-sideline backer, but your ability to cover? Like going back to just a certain play like your play against LSU where you followed the receiver across the middle of the field and deflected the pass for your teammate to intercept the ball. Does this speak to your ability to do cover and be a three-down linebacker?

CH: I think a lot of those things kind of come natural for me since I’ve been playing corner since high school. Really, it was my main position from ninth to twelfth grade and one of those last years I was playing safety like you said. So, things like playing with your eyes and playing the ball through the receiver’s hands are a lot of those things I can do. Naturally, I think it gives me a little bit of an advantage over a lot of guys on the next level just like I said because it comes naturally to me.

JH: Are you pretty close with Najee Harris going back to your time at Bama and has he talked to you at all just kind of going through this or whether it just be about ball or just talking about life?

CH: I haven’t reached out to him yet about the draft process, but in general, I like to observe guys from a distance and Najee is a real competitor. For me, starting as a freshman, I had to go against him EVERY SINGLE DAY haha. It was tough for a young guy like me, but we wanted to challenge me to make me better while he was getting better, so I do credit him for pushing me.

After the interview concluded, I came away pleased with the conversation I had with Christian Harris. He was a respectful young man and came off as a loose, personable individual that was able to joke around with you while genuinely answering your questions.

It’s no surprise that the Steelers conducted a formal interview with Harris as he fits that Power 5 underclassman tab that Colbert has been known for during his years as GM. He also has the hearts and smarts and pedigree the Steelers look for in a high draft pick, having started for the Crimson Tide since his true freshman season which is no small feat. Harris often referenced the “mentality” he has and how it ties to his preparation as well as his play style out on the field. He said that he was all about being a competitor and that can be cross-checked when he referenced the battles that he had with Najee Harris who we all know to be the ultimate competitor.

I saw what he was referencing in terms of having a feel for playing in coverage due to his cornerback background which was frankly news to me as the site I researched said he mainly played safety in high school. There are several instances where you see Harris do a good job carrying receivers up the seam or stay in their back pocket to deflect the pass like we see on the LSU play I referenced in the interview. Still, I probably should have asked him more about his reads, as his eyes can get stuck in the backfield and he can be slow to trigger on occasion which is one of his biggest knocks from an evaluation standpoint.

Harris was later asked about who he compares his game to in the league, of which he compared himself to Fred Warner as an athletic linebacker that can run sideline-to-sideline as well as play well in coverage. From a measurables perspective, Harris’s comparison carries some weight, having ripped off an official 4.44 40 and did well in the explosive drills as a similar stature to Warner. Still, Warner’s instincts and ability to flow to the ball definitely have Harris beat at this point, as this will be the area Harris needs to improve to scratch his athletic potential at the next level.

The Pittsburgh Steelers could address linebacker early on in the 2022 NFL Draft given their porous play against the run last season and the uncertainty surrounding Devin Bush regressing this season and Joe Schobert as a potential cap casualty. Harris could be a target on Day Two of the draft to address this need, although I have reservations drafting another uber athletic LB that has issues consistently diagnosing and reacting to the play like Bush deals with frequently. Still, the traits are there as well as the pedigree and demeanor for Christian Harris to be a productive player in the league for a long time. The Pro Day circuit will be telling how much interest Pittsburgh has in Harris as a potential fit.

What are your thoughts on Christian Harris and his interview? Do you think that he would be a good fit in Pittsburgh or would be too similar of a player to a guy like Devin Bush? Please leave your thoughts in the comments section below and thanks again for reading!