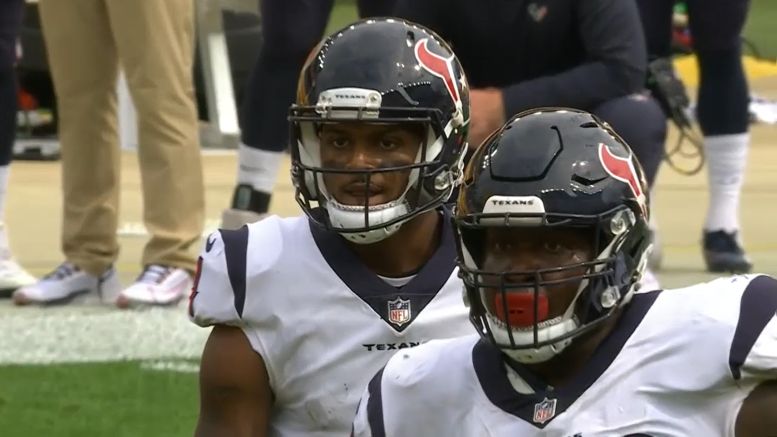 It was reported earlier during the offseason that the Cleveland Browns have no intention of committing long-term to former first overall quarterback Baker Mayfield this year, and that he will be allowed to play out his fifth-year option and potentially become a free agent in 2023.

When head coach Kevin Stefanski was asked about how they would approach the quarterback position moving forward, he did not give much of an answer, only offering a “we’ll see”. According to Mary Kay Cabot, one thing the Browns are seeing is whether or not it’s feasible for them to trade for Houston Texans quarterback Deshaun Watson.

“The Browns have done their homework on Deshaun Watson and will continue to monitor his legal situation, but it remains to be seen whether they’ll try to trade for him”, she reported for Cleveland.com yesterday.

As Cabot notes in her article, Watson was a potential draft choice for Cleveland in 2017. They were actually in a position to do so, trading back to the 12th overall pick, but they then turned around and traded that pick to the Texans, who used it to draft him.

The Browns also previously passed up the opportunity to draft Carson Wentz second overall the year before that, or to move up to the first overall pick to draft Jared Goff. Now, those wouldn’t necessarily have been ideal options, in hindsight, but it shows a pattern of their willingness to trade back rather than to select a quarterback they don’t love.

And yet they ended up with Mayfield with the first overall pick in 2018, in a quarterback draft class that also included Josh Allen and Lamar Jackson going in the first round. While he has turned out better than Josh Rosen and Sam Darnold, the other first-round quarterbacks that year, he has been clearly in the middle of the pack.

Mayfield was not healthy during the 2021 season, suffering a shoulder injury early on, and forced to play through it in significant pain. He had the shoulder surgically repaired early in the offseason, once the Browns were eliminated from postseason contention.

Trading for Deshaun Watson would completely change the script and would make them a much more balance offense. Mayfield struggled to connect and build relationships with his receivers, most notably Odell Beckham Jr., whom they ended up releasing this past season. He signed with the Los Angeles Rams and helped them win the Super Bowl.

The Browns have been willing to take on talented players with character red flags in the past, but their decision-makers shift so often that it’s hard to build the case that it amounts to a pattern. Kareem Hunt, for example, is one player, but their general manager at the time was John Dorsey, who drafted him in Kansas City.