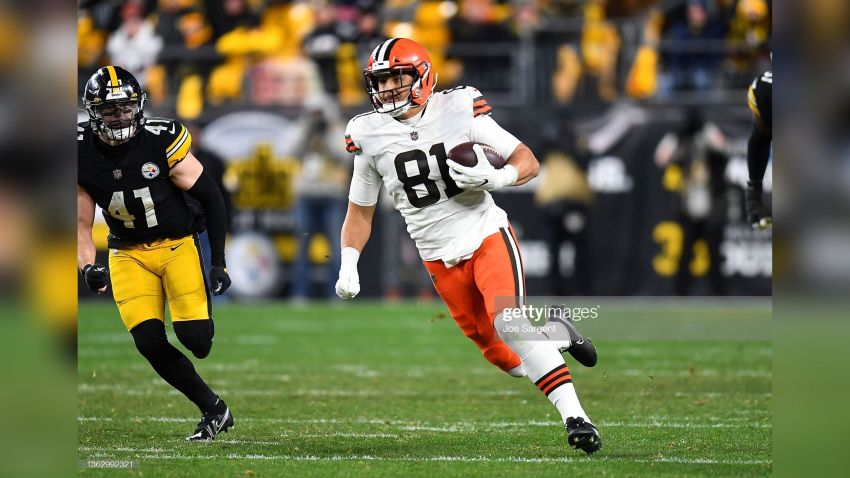 As was announced yesterday, the Cleveland Browns made the decision in advance of today’s deadline to place the franchise tag on 2017 first-round tight end David Njoku, part of their negotiating back-and-forth as the two sides seek to work out a long-term extension.

In spite of the fact that they have just committed substantial cap resources to one tight end, however, according to Jeremy Fowler, the Browns have no intentions of moving on from their other tight end, Austin Hooper, who is due $9.5 million in base salary this upcoming season (and another $9.5 million in 2023, as well).

Cleveland signed Hooper in 2020 to a four-year, $42 million contract, which included $23 million guaranteed—the entirety of his first two years. They still owe him another $19 million over the next two years, but none of it is guaranteed.

Over the past two seasons with the Browns, Hooper has caught 84 passes for 780 yards and seven touchdowns. He caught 38 passes for 345 yards and three touchdowns across 16 games during the 2021 season.

The Browns make substantial use of their tight ends in head coach Kevin Stefanski’s offensive system, and they are asked to go a lot more than receiving. Njoku bought onto that, even though he came into the league as a receiving tight end, as did Hooper when signed in 2020.

It’s worth noting that Hooper’s contract already includes a 2024 void year with a cap hit of $3.75 million. The team may be reluctant to restructure his contract because of that, and it’s unlikely that they would sign him to an extension with two years remaining on his deal. In other words, he is likely to stay at that $9.5 million mark (plus another $3.75 million in prorated money against his total cap hit).

The Browns still have roughly $18 million in cap space following the tagging of Njoku, and a potential new contract should lower his cap hit, which is now nearly $11 million. One big-ticket item they have to consider is the future of wide receiver Jarvis Landry, who has a base salary of $14.3 million, and would clear about $14 million overall after displacement if released.

While one could certainly argue that Landry isn’t worth that price tag, the Browns do not have the most robust receiving corps without him, helmed by Donovan Peoples-Jones and Rashard Higgins, the latter of whom is an unrestricted free agent. Anthony Schwartz was a third-round draft pick last year who would be asked to play a much bigger role in 2022.