The 2022 NFL Scouting Combine is in the books, and today I wanted to start a series to visualize some great data from Kent Lee Platt’s Relative Athletic Scores (RAS). Here is a link to his website in case you haven’t seen his work  https://ras.football/. To qualify for a RAS score, a player must have a total of six recorded metrics from any of the following: Height, weight, forty-yard dash, twenty-yard split, ten-yard split, bench press, vertical jump, broad jump, short shuttle, and 3-Cone. The player is then graded on each in comparison to the positional database since 1987 to get more of a feel of their size, speed, explosion, agility, and total value, giving context to the raw numbers.

The goal of the series is to provide the RAS from Platt, with a bit of my own twist with a size score and visualize it to get a simultaneous view of all the players at their position that participated at the combine. Here are the players that qualified: 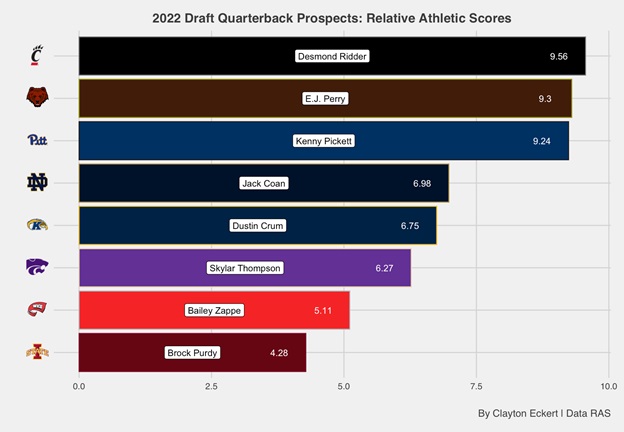 Cincinnati quarterback Desmond Ridder tops the graph, with elite grades in speed and explosion, a good grade in agility, and an okay size grade. Brown quarterback E.J. Perry and Pittsburgh quarterback Kenny Pickett have a RAS above nine, with the former having elite results in speed, explosion, and agility but a poor size result while Pickett has great grades in speed and explosion along with a good size grade. These three players verified the mobility desired by most NFL teams through their testing.

So, the data confirms the above average athleticism of the position in this day in age, but the sacrifice is size.

Speaking of which, I wanted to provide context of this with a size score using the RAS for the players height and weight, which includes all the combine invites since all the players are measured: 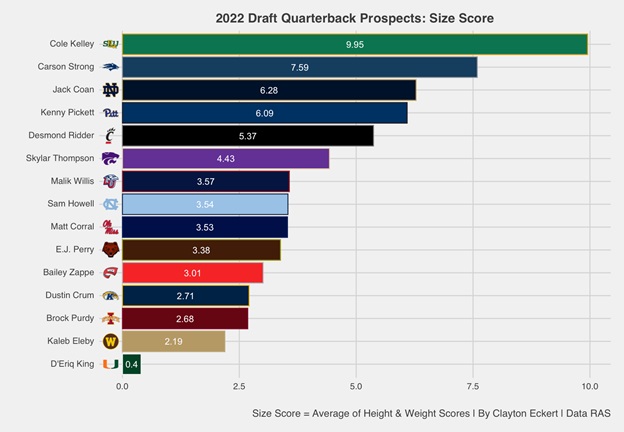 Right away we can see the majority of the quarterbacks (10/15) have a score below five, highlighting how small the class is using the historical data. We can also see Southeastern Louisiana quarterback Cole Kelley has an elite size grade, but unfortunately no other athletic combine numbers for additional context. Nevada quarterback Carson Strong has a good size score but also did not test otherwise.

Coan and Pickett have a size score above six, with very similar measurables and the latter providing more athleticism. Ridder is the final player with a RAS above five, with good height but his lower weight (211) lowering his score. It’s likely he will add weight to his frame in the NFL, which is encouraging considering his strong RAS for the position.

The remaining players are the smaller group, beginning with Thompson. Liberty quarterback Malik Willis and North Carolina quarterback Sam Howell are nearly identical in size along with Ole Miss quarterback Matt Corral having a similar size score with more height with room to add weight to his frame. Perry also fits in this camp, along with his strong RAS. Zappe is the final player with a RAS above three. Crum is another player with room to add weight with good speed. Purdy has been below average overall, and Western Michigan quarterback Kaleb Eleby is the final player with an above two size score. Miami quarterback D’Eriq King is by far the smallest quarterback in a class lacking size, historically low with a .4 size score! 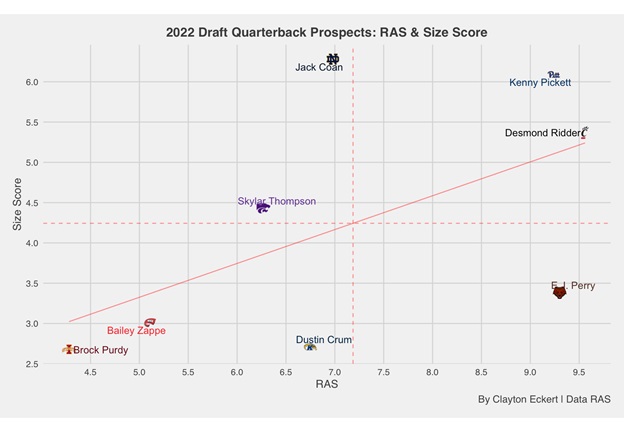 The graph highlights Pickett having the best package of size and athleticism of the qualifying quarterbacks, with the other players lacking in one area or another. Ridder lacks the size that Pickett possesses but provides intriguing athleticism.

For those that like the numbers, it’s unfortunate that more of the players invited to the combine don’t test fully. Of course, there are many valid reasons which I understand, but really wanted to see more of the men test to layer as much information as possible and continue to learn about the prospects. It will be interesting to monitor the pro days and continue to see how the men stack up in the coming weeks when Platt updates the site with the unofficial numbers.