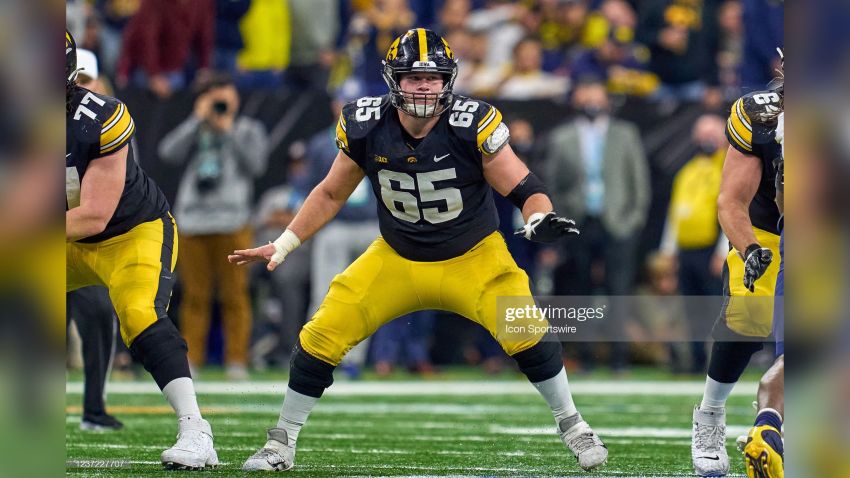 Today I wanted to look at the data from Kent Lee Platt’s Relative Athletic Scores (RAS) for the centers. Here is a link to his website in case you haven’t seen his work  https://ras.football/. To qualify for a RAS score, a player must have a total of six recorded metrics from any of the following: Height, Weight, Forty-yard dash, Twenty-yard split, Ten-yard split, Bench Press, Vertical Jump, Broad Jump, Short Shuttle, and 3-Cone. The player is then graded on each in comparison to the positional database since 1987 to get more of a feel of their size, speed, explosion, agility, and total value, giving context to the raw numbers. 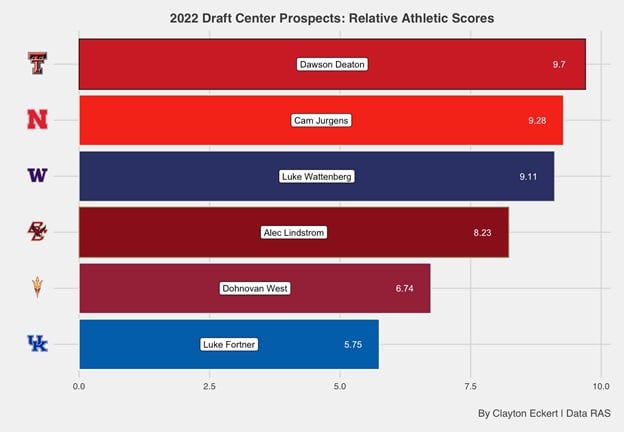 Three of the six qualifying players have a RAS above nine, starting with Texas Tech center Dawson Deaton who has a high score with great size, speed, and agility and good explosion! Nebraska center Cam Jurgens has elite speed and okay size. Washington center Luke Wattenberg has great explosion and agility along with good size and speed.

Boston College center Alec Lindstrom has a RAS above eight with great explosion, good speed and agility, and okay size.

There are two players with a RAS above six, beginning with Arizona State center Dohnovan West who has good explosion and okay size and speed. The final player is Kentucky center Luke Fortner who has great size, good speed, but poor explosion and agility.

The data shows the above average athleticism of the position in this day in age, considering all of the qualifying players with a RAS above five! It will also be interesting to see where players end up playing in the NFL, since moves along the o-line are fairly common from college to the pros. 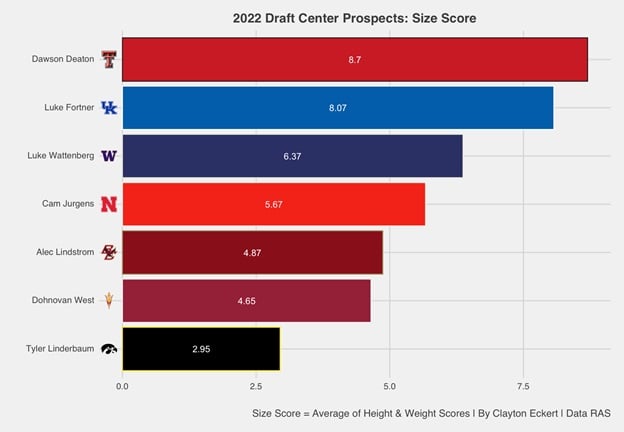 Here we only see 57% of the players with an above five size score, important context after the athleticism view. Deaton tops this graph as well, providing great value with his 9.7 RAS! Fortner has an above eight size grade as well, but bottom ranked RAS.

The remaining players had below five size scores, starting with Lindstrom who has the stronger RAS compared to West. Iowa center Tyler Linderbaum has a historically low size score of 2.92 and unfortunately didn’t test otherwise. 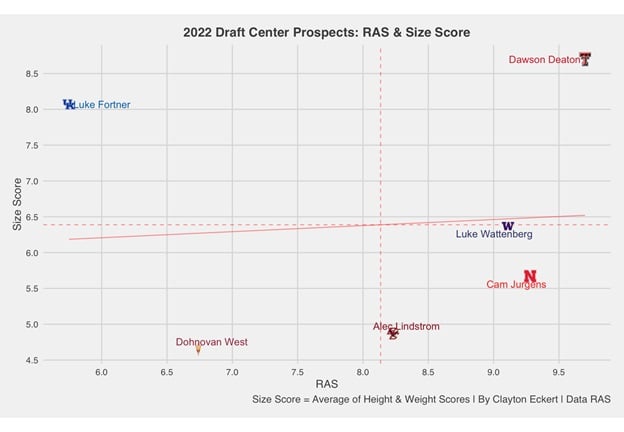 The graph highlights Deaton as the player with the best package of size and athleticism of the qualifying players, along with Wattenberg and Jurgens having great athleticism with above average size historically.

For those that like the numbers, it will be interesting to see what Linderbaum does at his pro day and see how his hopefully participation stacks up in the coming weeks when Platt updates the site with the unofficial numbers.