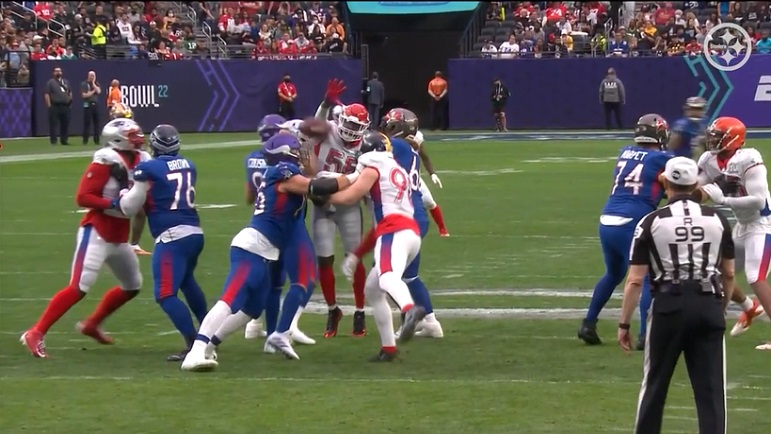 The Pittsburgh Steelers had four players participating in the 2022 Pro bowl in Las Vegas, NV and one of the was responsible for a first half turnover and score in the contest.

Steelers outside linebacker T.J. Watt forced a fumble for the AFC in the first quarter of the Pro Bowl Sunday afternoon and it was caught in the air by Cleveland Browns defensive end Myles Garrett, who returned 22 yards for a touchdown.

Working against NFC tackle Brian O’Neill, Watt was able to get quarterback Kirk Cousins and he proceeded to swat the ball during the throwing motion The football flew into the air past the line of scrimmage Garrett caught it and retuned the fumble for a touchdown.

The AFC went on to beat the NFC 41-35. Watt was credited with five tackles and a sack in the contest.

As for Johnson, he caught one pass for 33 yards on Sunday in addition to his two-point conversion catch.

Steelers rookie running back Najee Harris was credited with five carries in the game for 15 yards with a long of 9 yards. He did seal the game by converting a 4th and 2 passing play good for a 7-yard reception with 2:00 left in the contest. It was his only catch of the game.