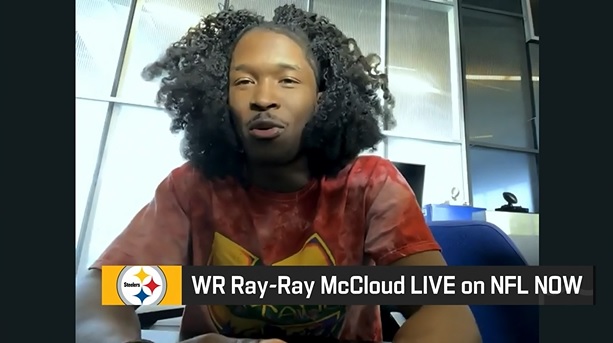 Ray-Ray McCloud knows the NFL is a business. He’s been on the business end of it before from draft pick to getting released by Buffalo, Carolina, and Buffalo again before landing in Pittsburgh. McCloud’s found stability with the Steelers. Now, he’s looking to stay in Pittsburgh long-term.

He joined NFL Now Tuesday and made it clear he doesn’t want to sign anywhere else.

“Going where your heart leads you,” he said of his free agent mentality. “I don’t see myself anywhere else. The Steelers treated me like family the day I walked through the door. I know it’s a business but I don’t want to play for anybody else but Coach Tomlin.”

McCloud was a late training camp add by the team in 2020 but made an immediate impression in the return game even without the benefit of a preseason. In a rare live-tackling special teams session during on camp practice, McCloud returned a kick for a touchdown and captured a roster spot. He’s been the team’s starting return man each of the last two days, the first Steeler to do so since Rod Woodson in 1992-1993. McCloud’s helped revive the team’s kick return game out of the basement they lived in prior to his signing.

“I’m just focused on what I can control. It’s a pivotal offseason for me…hopefully I’m with Steelers’ Nation. But I know it’s a business and I’m ready for who calls me next.”

McCloud is coming off a good year for him after bouncing around the league his first three years in the NFL. But his limited route tree, used primarily on RPOs and in the screen/quick game, has led to a low average of just 7.1 yards per catch in 2021 with a career average barely above six. It’s a number that looks more suited for a running back than a wide receiver. His market is likely to exist but it won’t be robust and if the Steelers don’t bring him back, and maybe even if they do, McCloud may have to patiently wait to sign.

Until then, he explained how he’s spending his offseason.

“I’m on the track. Route-running and on the track. With top-end speed, being able to change games’ momentum. I play special teams and that’s a big part of the game where you can change the game in a heartbeat. So that’s where I’m at. Top-end and route running.”

McCloud credited Danny Smith for improving his decision-making and ball security, issues he admits he suffered through his first two years in the NFL that ultimately got him bounced by Buffalo and Carolina.

It’s certainly reasonable to believe the team will bring McCloud back on a short, cheap contract to serve as the team’s punt and kick returner and backup slot receiver. With JuJu Smith-Schuster also slated for free agency, McCloud could be in the mix for an expanded role though Pittsburgh is almost certain to add to the receiver room this offseason.