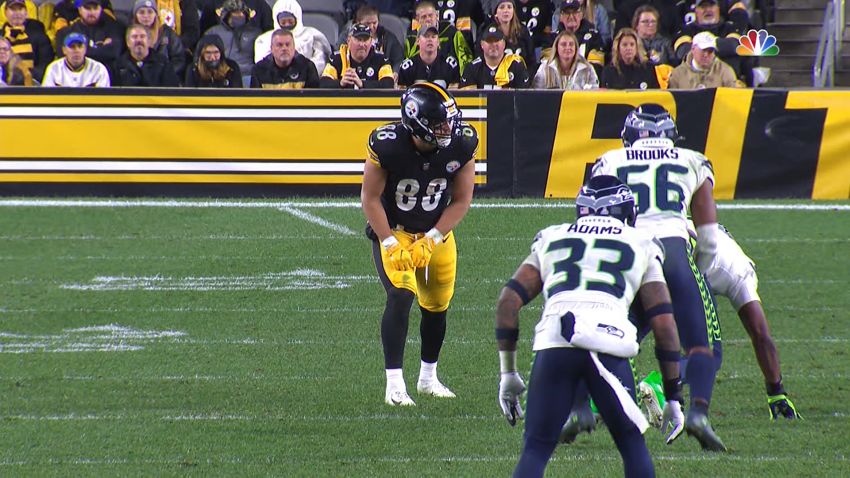 While the Pittsburgh Steelers’ first two selections in the 2021 NFL Draft have been questioned, particularly with regards to position value relative to need, they were fortunate to get the sort of production that they did from their top two rookies, stat lines headed by a combined 17 offensive touchdowns—accounting for more than half of their total.

Ten came from first-round running back Najee Harris, who rushed for seven scores and got into the end zone three more times on receptions. The man drafted after him, Pat Freiermuth, caught seven touchdown passes, all in the red zone, tying a franchise rookie record for touchdowns by a tight end (and one off the franchise tight end record overall).

His strong rookie season has not gone unnoticed around the league, even if he didn’t put up the most glamorous numbers in terms of efficiency. In a recent video piece by Nick Shook looking at every team, the NFL.com contributor chose Freiermuth as the unsung hero for the Steelers during the 2021 season.

“Pat Freiermuth is the future at tight end in Pittsburgh”, he said. “His first season with the Steelers was a productive one, a campaign in which the Penn State product caught 60 passes for close to 500 yards and seven touchdowns. Freiermuth sprinkled in a few highlight grabs along the way, and is already drawing comparisons to Steelers hero Heath Miller. Expect his jersey to fly off the racks in the Steel City this offseason”.

Freiermuth was the first tight end the Steelers drafted inside of the fifth round since 2007, which was Mike Tomlin’s first year on the job. He used a third-round pick on Matt Spaeth that year. Two years earlier, Bill Cowher drafted the aforementioned Heath Miller in the first round, so the fate of the position was secure in the hands of those two for some time.

Tomlin also utilized veterans—first a failed swing with Ladarius Green, then adding Vance McDonald via trade before finally using Eric Ebron in free agency—to fill out the position, with 2015 fifth-round pick Jesse James being their most successful draft pick at the position in the interim.

Of course, Freiermuth is at an entirely different level, and certainly has the makings of being the true successor to Miller—perhaps even putting up better numbers as a receiver. He probably has a bit more vertical oomph and a little more wiggle in his routes, anyway, even if they both are known for having rock-solid hands.

Whoever the quarterback is for the Steelers next season, I suspect he’ll quickly take to finding Freiermuth open and making the key conversions to extend drives. Already a fan favorite, he figures only to grow heading into 2022 and beyond.