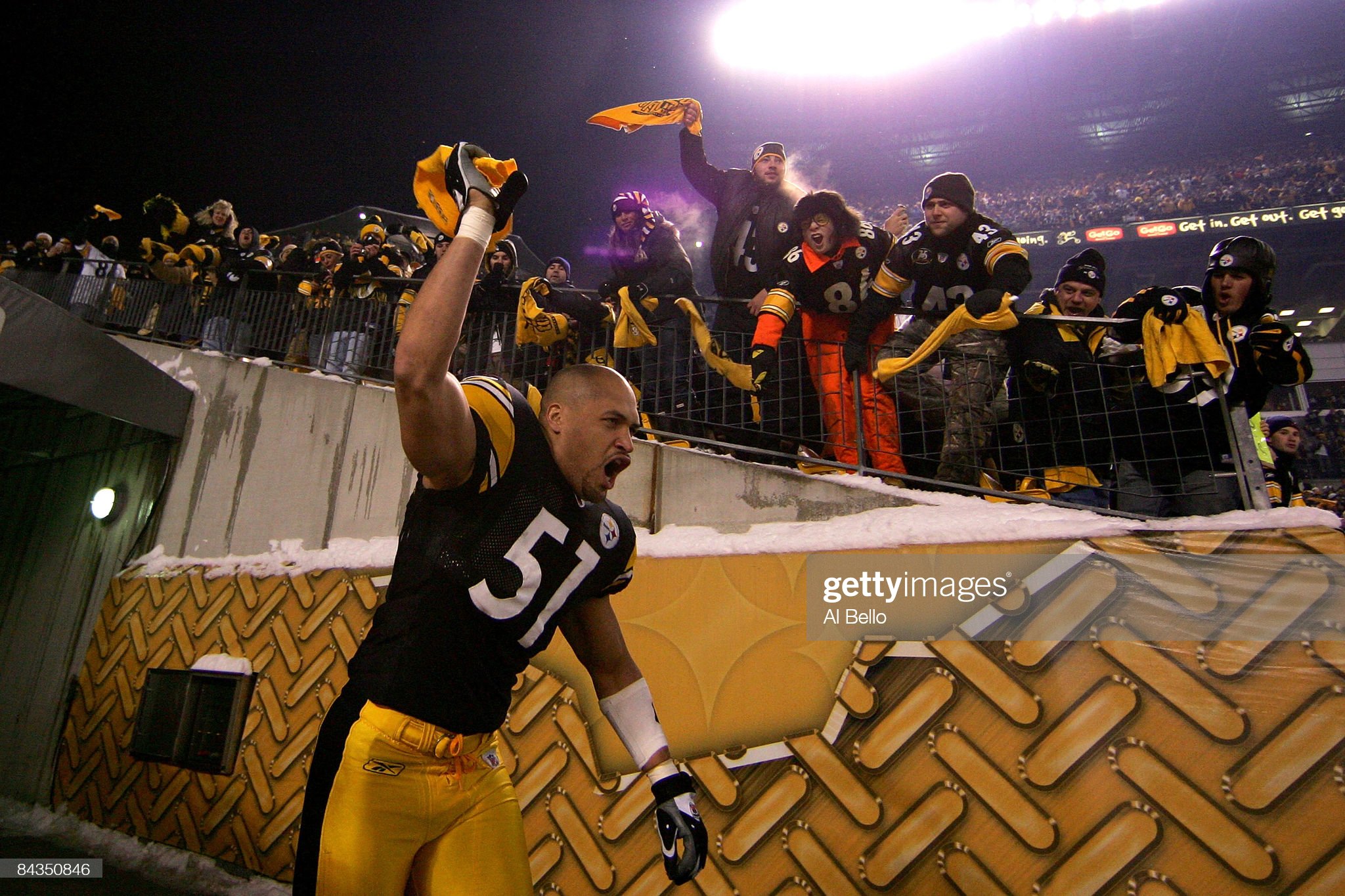 More than 65,000 fans braved the elements to pack into an “electric” Heinz Field for the 2008 AFC Championship Game on January 18, 2009 for a classic matchup between the Pittsburgh Steelers and Baltimore Ravens.

That game, which the Steelers ultimately won 23-14 — sealed by an iconic pick-6 by Hall of Fame safety Troy Polamalu — sent Pittsburgh to Super Bowl XLIII, which they went on to win on Santonio Holmes’ late toe-tap touchdown in the back corner of the end zone, giving Pittsburgh its then-record sixth Super Bowl trophy in NFL history.

All these years later, former Steelers’ linebacker and Hall of Honor Class of 2020 inductee James Farrior still believes that environment on January 18, 2009 at Heinz Field was the best environment he played in as a Steeler, calling Heinz Field that night, in 26-degree weather — an electric atmosphere that was never topped for him in his 9-year Steelers’ career from 2002 to 2011.

Speaking with longtime Pittsburgh-area sportscaster Stan Savran on the Steelers Time Machine segment for Steelers.com, Farrior recalled that electric atmosphere, stating how much that moment meant to him, not only in beating the Ravens to go to the Super Bowl, but what the Ravens-Steelers rivalry meant to him throughout his career as well.

“Oh, for sure. The Ravens, that’s out biggest rivalry. We loved competing against those guys. We had a home game, and what better way to get to the Super Bowl than beating your arch nemesis? It was pretty special,” Farrior said to Savran. “It was a hard-fought game, close throughout. Very cold. It was a very low-scoring game, and like I said before, going agains the Ravens in a championship game, we wouldn’t have it any other way.”

In that AFC Championship Game, the Steelers jumped out to a 13-0 first-half lead thanks to two field goals from kicker Jeff Reed and a 65-yard touchdown catch by Holmes from Ben Roethlisberger. The Ravens fought back though as running back Willis McGahee scored late in the first half on a 3-yard rushing touchdown to make it a 13-7 game.

The second half was as hard-fought as they come, as the Steelers took a 16-7 lead on another Jeff Reed field goal before McGahee scored for the second time on the ground — this time from 1-yard out early in the fourth quarter. Things slowed down from there, until Polamalu stepped up and made one of the more iconic plays in his illustrious history, even if Farrior didn’t quite remember the details from within the game.

13 years ago today we witnessed the pick-6 by Steelers S Troy Polamalu against the Ravens in the AFC Championship game at Heinz Field on Jan. 18, 2009. 🐐 #Steelers pic.twitter.com/8MdXjC1PM7

“I remember we scored to take the lead, not a lot of time left. It’s our time to shine again. We felt like we had everything ready to go and we thought we were going to close the game out,” Farrior said. “I didn’t think we’d close it out in that type of fashion, but Troy, the type of player that he is, he came up with a big play when we needed it. The rest was history.

“It was a very exciting play, and I still haven’t been to a game or been part of an atmosphere that was that electric.”

Knowing that the win in the AFC Championship Game came against the Ravens of all teams made the moment that much more special at Heinz Field. Though the rivalry was certainly bitter on the field, there was nothing but mutual respect from both sides, according to Farrior, who said that the games were so hard-fought and violent because the two teams were spitting images of each other, built the same way with the same mentality.

“We both have the same mentality, we both have sort of a bully mentality that we tried to impose our will on teams, and they were the same way,” Farrior said. “We were mirror images of each other. Those games brought out the best in both of us, and it’s funny, because I recently saw Ray Lewis at a function, and he was talking about some of the rivalries, and he mentioned that those were some of the best games he’s ever been a part of in his life. He was one of the guys that I looked up to coming out, he’s one of the best linebackers to ever do it, and he cherishes those games.

“…There was a very large dose of mutual respect [between the teams],” Farrior added. “We both had the utmost respect, but we loved to hate each other. We never really got into anything crazy, but during the plays, between the lines and between the whistles, it was some tough football.”

That right there is what makes the Steelers-Ravens rivalry so special.

Yes, it’s as hard-fought and violent as they come, but the respect is through the roof, both from the teams and the fan bases. That’s truly hard to find in rivalries, simply because they’re so intense. That’s the Steelers and Ravens though, and likely always will be. You can’t say the same about Steelers-Bengals or Steelers-Browns at this point.