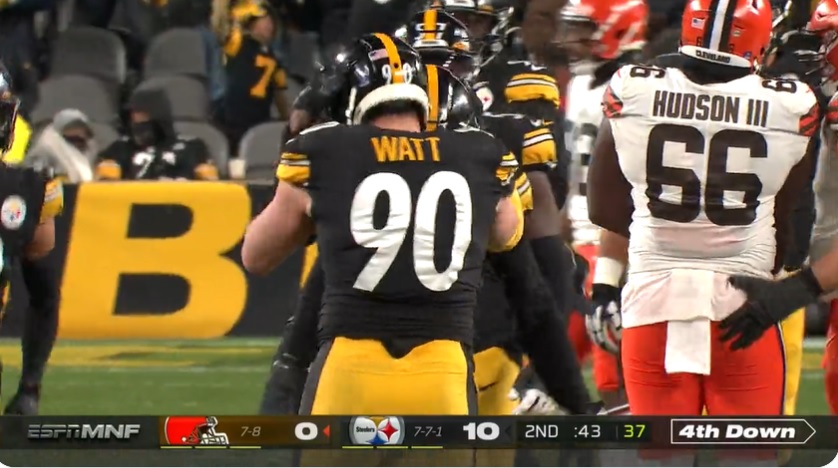 T.J. Watt has been voted the Pittsburgh Steelers’ 2021 MVP. It’s the third straight year he’s won the award. The team announced the news moments ago.

T.J. Watt has been voted the #Steelers Most Valuable Player by his teammates for the third consecutive year!

Watt has won the award for the third time in his five-year career, taking home the trophy in 2019, 2020, and now 2021. He is the first player in franchise history to win MVP three straight years.

It comes as no surprise to see Watt win it this year. He leads the team and the NFL with 21.5 sacks, one shy of tying Michael Strahan’s official single-season record. Watt is coming off his most productive game of the year, notching four sacks in the Steelers’ Week 17 win over the Cleveland Browns. It was the first four-sack game of his career, and the first by a Steeler since 2001.

On the year, Watt has 59 total tackles (20 for a loss) to go with his 21.5 sacks, six pass deflections, four forced fumbles, and three fumble recoveries. He’s done it all despite missing two full games and halves of two others due to injury. It’s unlikely he’s played at 100% for most of the season. Even now, he’s dealing with cracked ribs suffered in the team’s Week 15 win over Tennessee.

He is considered the frontrunner to win Defensive Player of the Year, competing with the likes of Dallas LB Micah Parsons, Browns DE Myles Garrett, and Rams DT Aaron Donald. Watt has finished in second or third place for the award each of the last two years.