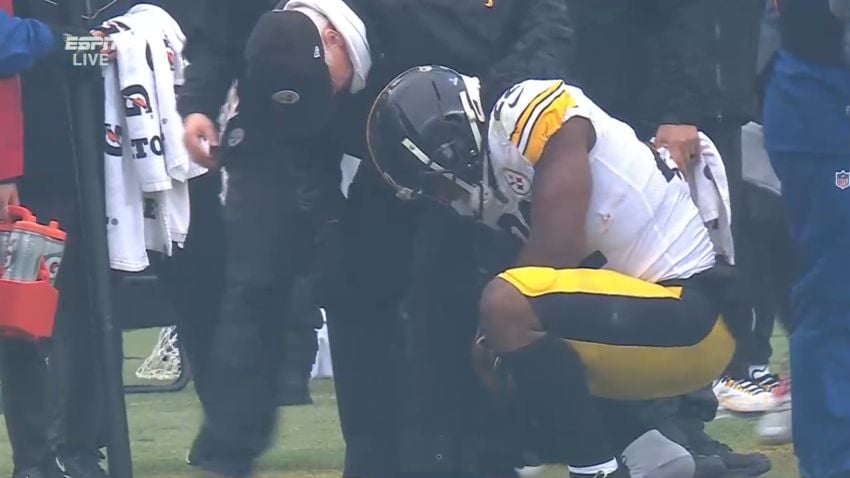 The Steelers already had a challenge on their hands Sunday in their regular season finale. To make the playoffs, they needed to beat the Ravens, a team that had given up the least number of rushing yards through 17 weeks. And they needed to run their offense with some backups starting on the O-line.

To make things worse, rookie star RB Najee Harris twisted his right elbow badly while being tackled after catching a pass on the third play of the game. He missed the remainder of the first half while RB Benny Snell stepped in.

Harris was able to return late in the third quarter, delivering several key plays to keep drives alive in the fourth quarter and overtime. With a protective sleeve on his injured right arm, Harris adjusted by carrying the ball with his left. He also caught three passes despite the injury. In his postgame presser, head coach Mike Tomlin described it simply as an “elbow injury”. He did not provide any further detail or discuss whether Harris might miss practice or playing time.

Harris will likely have a date with an MRI to assess the extent of any damage. Hopefully, we will learn more when Tomlin meets with the media again on Tuesday. For now, we can make a few assumptions based on the film and how Harris performed:

1. Harris likely sustained a ligament injury to his right elbow.
2. He did not have a dislocation or a significant fracture.
3. He has a good chance to play when the Steelers face the Chiefs next Sunday night.

First, let’s look at the film. You can see Harris plant his right arm on the ground and his right elbow bends inward under the weight of the defender as he is tackled.

As soon as he gets up, it is clear that there is no significant deformity to suggest a dislocation.

His arm was also in normal alignment while trainers worked with him on the sideline.

OK, let’s backtrack for a quick anatomy review of the elbow: 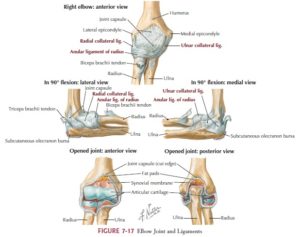 Tendons attach muscle to bone and ligaments attach bone to other bone. The ulnar collateral ligament (also known at the medial collateral ligament) forms a connection between the distal medial aspect of the humerus (upper arm bone) to the proximal medial part of the ulna (one of the forearm bones), providing stability to the medial aspect of the elbow joint.

The way Najee’s arm was bent was due to a valgus force, or pressure on the lateral aspect of the arm, pushing the elbow medially and the lower forearm laterally. This results in stretch or tension on the ulnar collateral ligament and can result in a tear (a friendly reminder that a sprain is a tear), causing instability. And pain at the time of injury of course.

The trainers likely performed a valgus stress test to assess Harris’s elbow. The elbow is held in a slightly bent position. The trainer would support the upper arm and place pressure on the lateral aspect of the elbow. A positive test reproduces pain in the medial elbow or shows laxity in the medial elbow joint. Here is a video showing the test being performed.

Harris was given a heavy sleeve to provide support and stability to his right arm. He was reportedly taking snaps on the sideline during the second quarter to check his arm strength and function. Given that he only carried the ball with his left arm when he returned to play later in the game, it is clear that Harris didn’t trust his right arm function enough to provide ball security. He was able to move it easily and, more importantly, he was able to catch passes.

Without knowing the extent of the injury, it is difficult to predict if Harris will miss time. He will probably experience swelling over the next few days that will impact his participation in practice. If his injury is limited to a ligament sprain, it should heal, and he would not require surgery in the offseason.

The Steelers have punched their ticket for the playoffs, and every week presents a one-and-done scenario. With that in mind, Najee Harris will likely be on the field if he and his coaches believe he gives the team a better chance to win. And even with only one healthy arm, it’s safe to say he does.