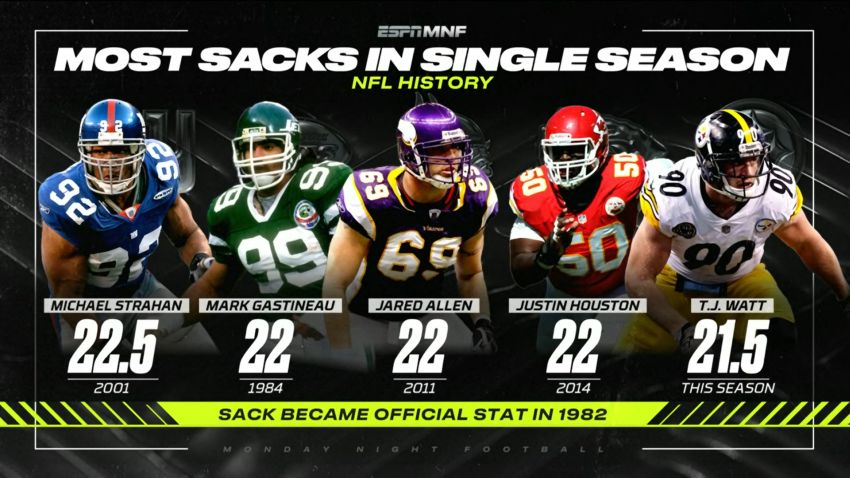 T.J. Watt became just the 13th player of the sack era (beginning in 1982) to record at least 20 sacks in a single season after compiling four in last night’s game, which was a new career-high for a single game for him, and just half a sack shy of the team’s all-time single-game sack record (belonging to Chad Brown, who had 4.5 sacks in one game during the 1996 season).

The Pittsburgh Steelers outside linebacker retook his NFL sack lead in commanding fashion after losing it the day before when the Chicago Bears’ Robert Quinn notched number 18, himself jumping from 17.5, which was already a Steelers franchise record, to now 21.5, blowing past the organization’s previous best.

He now just needs one more sack in the regular-season finale to tie former New York Giants defensive end Michael Strahan for the most sacks in a single season in NFL history, or a sack and a half to break the record. He’s already moved into fifth place all-time, behind Strahan, Justin Houston, Mark Gastineau, and Jared Allen, all of whom had 22. But he doesn’t go into a season thinking about such numbers.

“I tell people all the time, the first year or two I used to do big, individual goals, X amount of sacks, [tackles for loss], all that stuff. But it adds too much pressure. You start chasing and all that stuff”, he told reporters after the game when he was asked if he sets goals for himself like hitting 20 sacks.

“Now it’s just trying to affect every game the best I can prepare, and it’s been working for me, so I’m not really looking at goals like that anymore”, he said, shifting priorities away from records. “I’m just trying to be a game-wrecker”.

He’d rather be a game-wrecker than shoot for game records. I’m sure any great player would say the same, of course, but I’m betting most still set goals for themselves. It’s not like we haven’t heard players talk about wanting to hit 2000 receiving yards and things like that.

That would be the Baltimore Ravens, who have allowed 54 sacks this year on 633 dropbacks, a sack percentage of more than 8.5, the fourth-worst percentage in the league. Their 54 sacks allowed are the most in the NFL. They are playing a backup right tackle in Patrick Mekari, though he has been there now most of the season.