A little less than two months from today, the 2022 NFL league year will start and at that time all 32 teams will need to be compliant with the Rule of 51 regarding the salary cap. These next seven weeks figure to include the Pittsburgh Steelers making quite a few moves in order to get themselves ready for the start of the new league year. With so much misinformation already floating around on other sites concerning the Steelers current salary cap situation, I thought I would begin setting the record straight on this Monday with the first in a series of posts that go over where things are and where things might be going.

To begin this series, we need to establish a current snapshot of the Steelers salary cap situation for 2022 as we sit here seven weeks out from the start of the new NFL league year. The below snapshot is of the team’s Rule of 51 status and accounts for current expected salary cap rollover from 2021 and an estimated NFL salary cap amount of $208.2 million. All estimations below result in the Steelers being $33,907,414 under a 208.2 million salary cap number as we sit here in the latter part of January. These numbers are up to date with all offseason transactions that have taken place through Monday morning.

You can see at the bottom of this post a list of the 59 total players currently under contract with the Steelers as of January 24. This post also details the Steelers 2022 dead money by player as of Monday morning. 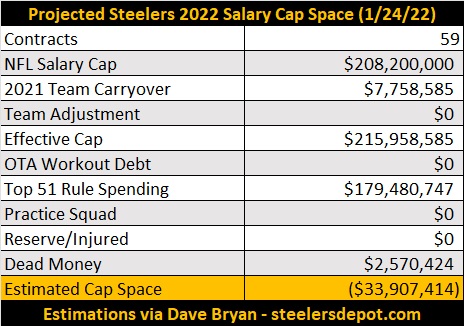 Likely forthcoming costs prior to start of new league year in March:

WORKOUT BONUS ADJUSTMENT: All 32 NFL teams are expected to have an offseason adjustment placeholder of roughly $849,600 added to their salary cap for 2022 team offseason workout bonuses. To summarize, this is the total amount of CBA mandated workout bonuses that could be earned by the players during the offseason. This amount is first debited from the team’s salary cap and once training camp begins it will be removed and then replaced with the actual amount of workout bonuses earned by the players during the offseason.

PROVEN PERFORMANCE ESCALATOR INCREASE: In 2011, the CBA implemented the Proven Performance Escalator (PPE), which allows draft picks (third through seventh rounds) to receive an upgraded salary that is equivalent to the low Restricted Free Agent (RFA) tender if the player performed well over the first three years of his contract. The 2020 CBA added second round picks to this calculation and changed the criteria for earning the PPE in addition to adding additional compensation levels. Under the revised PPE rules, meeting playing time thresholds (35%) still will earn the PPE at the low RFA tender level, while more playing time (55%) will earn the low tender, plus $250,000, while reaching the Pro-Bowl (first-ballot only) will be paid at the second-round RFA tender. The Steelers have one player from the 2019 draft who will earn the PPE this offseason and that’s wide receiver Diontae Johnson. He will see his $1,078,767 base salary jump to the estimated low restricted free agent tender amount of $2.54 million plus $250,000. In short, Johnson is expected to get an increase of $1,711,233 million for 2021 and it will go against the Steelers salary cap as well. That expected increase in salary is not yet accounted in our early offseason salary cap snapshot.

EXCLUSIVE RIGHTS FREE AGENT TENDERS (ERFA): Exclusive Rights Free Agents are players that must be tendered contracts of the league minimum, based on the player’s length of service in the league. Once tendered, these players are fully under the team’s control and are not free to negotiate with other teams. After already exclusive rights tendering long snapper Christian Kuntz, the Steelers have one other player who is scheduled to become Exclusive Rights Free Agents (ERFAs) in March that is also likely to be tendered: That player is C/G J.C. Hassenauer ($895,000). If the Steelers do tender Hassenauer in the coming weeks, the offset in the Rule of 51 based on the current players under contract would be just a $70,000 increase in cap cost.

RESTRICTED FREE AGENT TENDERS (RFA): Restricted Free Agents are players whose contracts have expired and who have three years of accrued service time. The Steelers must decide if they want to tender the player with an RFA offer. Once tendered, another team can still sign the player to an offer sheet, but the Steelers then have seven days to match that offer sheet and thus retain the player under the terms of that tendered offer sheet from the other team. If the Steelers were to choose not to match the RFA offer sheet, they would then receive compensation based on the level of RFA tender they had made to the player. The Steelers have four players who are pending Restricted Free Agents (RFAs) and they are ILB Robert Spillane, ILB Marcus Allen and QB Dwayne Haskins. We already know that Haskins will be tendered at an original round level of $2.54 million. Allen could get the same level as well. As for Spillane, he might just get a Right of First Refusal tender and that amount would be estimated to be $2.433 million. The second any of those players are restricted they will each likely enter the Rule of 51 and then displacement would take place. Roughly $1.835 million of cap space would be used on each restricted free agent tendered as the Rule of 51 currently sits.

UNRESTRICTED FREE AGENT RE-SIGNINGS (URFA): The following 17 players are currently scheduled to become unrestricted free agents (UFAs) and thus will be free to sign with other teams if they haven’t re-signed with the Steelers before the new league year begins on March 16th at 4:00 p.m.: QB Ben Roethlisberger, WR JuJu Smith-Schuster, T Chukwuma Okorafor, WR James Washington, G Trai Turner, WR/KR/PR Ray-Ray McCloud, TE Eric Ebron, RB Kalen Ballage, C/G B.J. Finney, QB Joshua Dobbs, S Terrell Edmunds, CB Joe Haden, DT Montravius Adams, CB Ahkello Witherspoon, OLB Taco Charlton, CB Arthur Maulet, and S Miles Killebrew. In all likelihood, a good portion of these 17 players will not be re-signed before March 16. Any, however, that might be re-signed in the next seven weeks will likely need to have their 2022 salary cap charge accounted for in the Rule of 51.

Quick Math: Adding the projected estimated and realistic costs together that the Steelers will have prior to the start of the new league year, roughly another $8.75M in salary cap space is already spoken for and that’s with the team only taking care of their exclusive rights and restricted free agents. So, a realistic look as we sit here today includes the team projected to be $25.15 million under the cap ahead of them re-signing any of their own free agents. It’s obvious that the Steelers also have avenues to create more salary cap space. Those avenues will be addressed in my next post in this series.

Credit: Some data used in this post came courtesy of the NFL CBA, Over the Cap, Joel Corry, and Ian Whetstone. 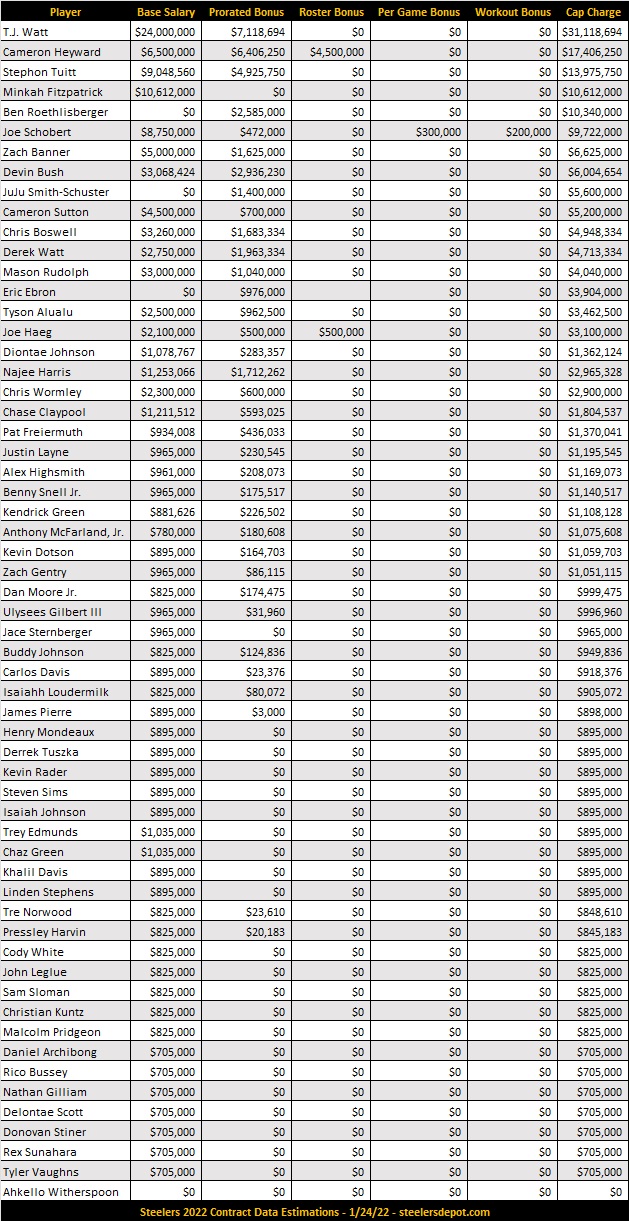 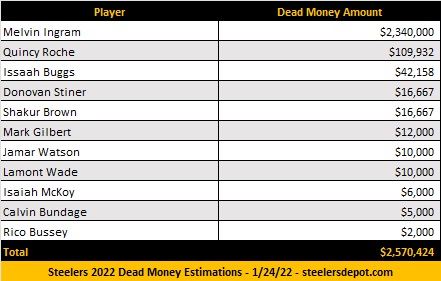