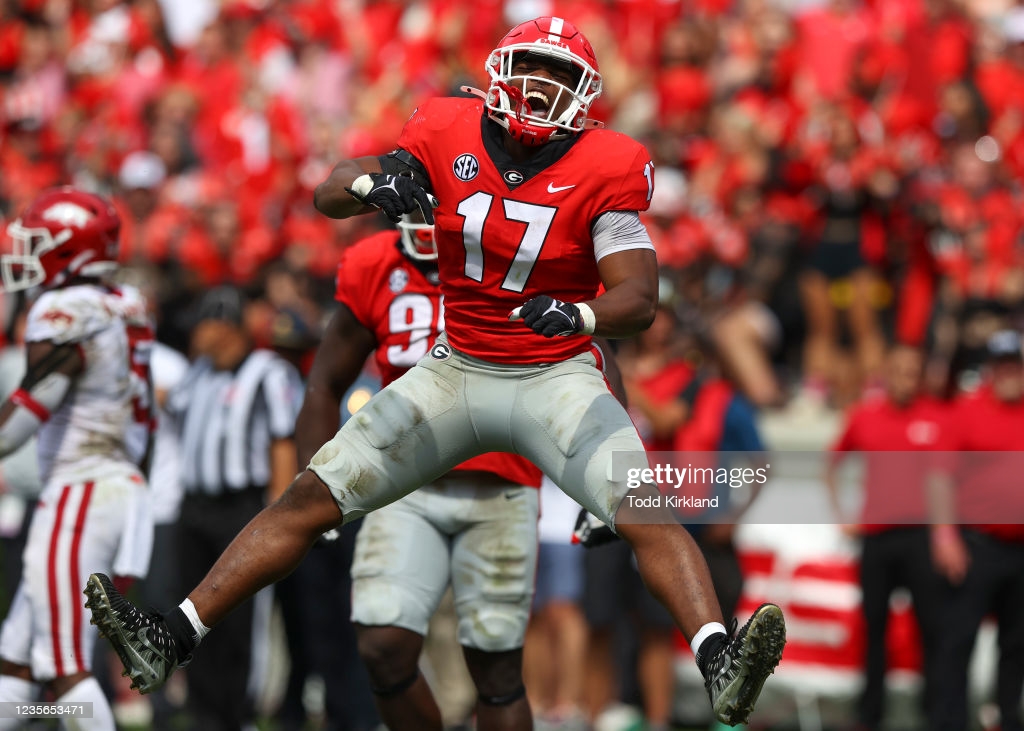 Every week in lead up to the slate of college football games, we will be highlighting several college football prospects in each matchup that project to be sought after in the 2022 NFL Draft and specifically how they may be viewed by the Pittsburgh Steelers.

The Crimson Tide Bulldogs face off once again for the National Championship after Alabama beat Georgia in convincing fashion 41-24. WR #1 Jameson Williams tore apart the Bulldogs secondary in their first matchup, catching seven passes for 184 yards (26.3 YPR) and two TDs.

Williams is a true deep threat with the speed to take the top off the defense yet possesses the route running ability to work the short and intermediate areas of the field as well, being a threat to take even short crossing routes to the house after the catch. Williams has distinctly playing himself into first round consideration with his stellar season, making his prospects of playing for Pittsburgh rather slim. However, the Steelers are in need of a burner on the outside and Williams fits the bill to a tee.

Another player who may not be in the range of the Steelers eventual first round draft pick but needs to be watched is OL #73 Evan Neal. He has moved to the blindside after manning the RG and RT spots in his first two seasons in Tuscaloosa, showing impressive athleticism for a man of his size. He generates great push on the LOS in the run game, but can be streaky in pass protection, struggling with speed and inside counters at times off the edge. Georgia’s defensive front presents a tall task for Neal who hopes to cement his status as OT1 in this draft class, and his performance will help dictate whether he is in-play for Pittsburgh or becomes a top-ten selection.

On the defensive side of the ball for the Tide, a name that hasn’t garnered national headlines you need to look for is DL #48 Phidarian Mathis. The 6’4, 312lb senior has the size and strength to man the interior and penetrate gaps against the run while also having the athleticism and motor to be effective as a pass rusher inside, having sacked the QB nine times in 2021. A likely Day Two selection, Mathis has the chance to show scouts that he has the skill set to be a three-down player at the next level, aiding the front seven in stopping the run while being an effective pass rusher. Seeing as Pittsburgh has struggled up front this season, Mathis’s name should be circled.

Other defenders to watch for Alabama include S #9 Jordan Battle and LB #8 Christian Harris. Battle is a hard-hitting safety that has improved every season, being trusted more with his ability to be rangy on the backend of the defense and make plays on the football I pass coverage. Harris is an exciting player when he is coming downhill, having the size and explosiveness to lay violent hits on ballcarriers or on the QB when sent on the blitz. The interest Pittsburgh would have in either player will be dictated on whether they re-sign Terrell Edmunds at safety or decide to save cap space by moving on from LB Joe Schobert this offseason. Nevertheless, both defenders figure to be in that Day Two range.

For the Bulldogs, the main attractions are on the defensive side of the football. It all starts upfront for Georgia with DL #99 Jordan Davis and #95 Devonte Wyatt clogging up the middle, stifling opposing running games on the ground. Davis gets all of the media attention as the Bednarik and Outland Trophies this season, using his 6’6, 340lb frame and impressive athleticism to defeat single blocks with regularity and take on double teams to free up linebackers to make plays. However, the argument could be made that his running mate is the better pro prospect, as Wyatt is a disruptive penetrator against the run and provides more pass rush than Davis. Both defenders should go in the Top-60 selections come draft day.

The linebackers for the Dawgs heavily benefit from the play of the defensive line, specifically star LB #17 Nakobe Dean. Dean’s game is predicated on speed and moving in space, having the sideline-to-sideline pursuit to run down the ballcarrier as well acumen as a pass rusher to win on twists and stunts to the QB. Dean also is quite the instinctive defender in pass coverage, successfully covering backs and TEs. He is undersized for the position and can struggle to get off blocks, so scheme fit could dictate Dean’s ceiling and what teams are willing to pull the trigger early on him. Pittsburgh has struggled with undersized LBs as of late, but Dean’s ability to make plays is enticing.

Other members of the linebacking core to watch for Georgia include #41 Channing Tindall and #7 Quay Walker who profile as mid-round draft options. In the secondary, CB #11 Derion Kendrick has made a name for himself since transferring from Clemson, picking off two passes in the semifinal against Michigan, having the length and ball production scouts love to see in college defensive backs. He has a previous arrest on his ledger for gun charges that have since been dropped, causing him to leave the Clemson program. Should his past be vetted and cleared, Kendrick has the talent and potential to be a calculated risk for a team wanting to take the chance at what he can become.

Other names to watch for are OL #69 Jamaree Sayler and #54 Justin Shaffer who have been invited to the Senior Bowl. The Bulldogs also have a two-headed beast in the backfield with RB #3 Zamir White and #4 James Cook with White serving more as the “Thunder” and Cook being the “Lightning” as a superb pass catching back.

One name to keep an eye on is WR #1 George Pickens who has come back from a torn ACL suffered in spring practice to play in the last couple of games for Georgia. Pickens has unbelievable talent paired with a 6’3, 200lb frame, but the injury could suppress his draft stock, possibly motivating him to come back another season. Should he have a big game on the biggest stage though, look for him to enter his name into the draft as a potential value should his injury be a thing of the past.

What are your thoughts on the National Championship Game and prospects listed above? How do you think they will fare on Monday? Who else will you be watching for this weekend as a potential draft prospect for Pittsburgh? Please leave your thoughts in the comments section below and thanks again for reading!