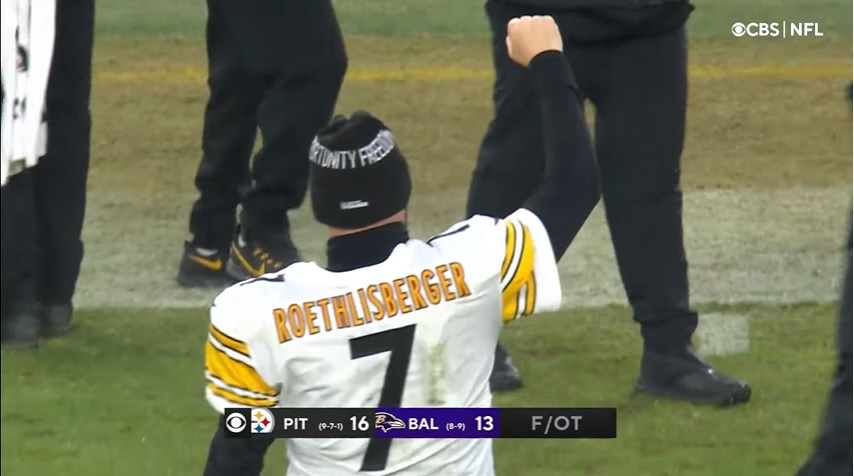 Trailing 10-6 late in the fourth quarter of a do-or-die game on the road against the Baltimore Ravens at M&T Bank Stadium in Week 18, the Pittsburgh Steelers somehow found a way to drive for the go-ahead touchdown with under four minutes remaining, and then somehow managed to drive for the game-winning field goal in overtime, punching their ticket to the playoffs for the second straight year.

Competing in that type of environment under that sort of pressure is something Steelers’ quarterback Ben Roethlisberger hopes helped prepare a young Steelers’ squad for the actual playoff environment the Steelers will have to deal with on the road Sunday night inside Arrowhead Stadium against the red-hot Kansas City Chiefs.

Appearing on the 102.5 WDVE Morning Show Friday, Roethlisberger addressed playing in must-win games down the stretch to keep the Steelers’ season alive.

“Yeah, hopefully, I mean…we’ve been kind of playing that…’05 team…,” Roethlisberger said Friday morning, according to DVE audio from iHeart.com. “…These last couple games have been playoff games for us. We’ve had to take that approach. I get it, it doesn’t have the fanfare, it’s not called a playoff game, but we’ve had to have the playoff mindset. To finish that game in Baltimore, both sides of the ball, Box [Chris Boswell], I hope that that can give guys a kind of a feeling of, okay, everything in the post season is a little more…amped up.

“It’s a little more important. And so, hopefully everyone goes out with that intensity.”

There’s something to be said for a young team fighting for its playoff lives for roughly a month down the stretch, winning three of its last four to ensure it has a chance to even get into the playoffs with some outside help. Is there statistical proof that being in that situation before the playoffs even starts helps a team? Probably not, but that mentality of every second, every rep carrying significant weight has to help a young team grow and learn on the fly.

That said, the playoff atmosphere inside Arrowhead Stadium — the loudest stadium in the NFL — can’t really truly be prepared for.

Roethlisberger, Mike Tomlin and the other playoff-experienced veterans on the team can do all that they can this week leading up to the Wild Card matchup to try and prepare a young Steelers’ team for that environment and that type of pressure, but it’s not something a player can fully prepare for or understand until he’s in the arena.