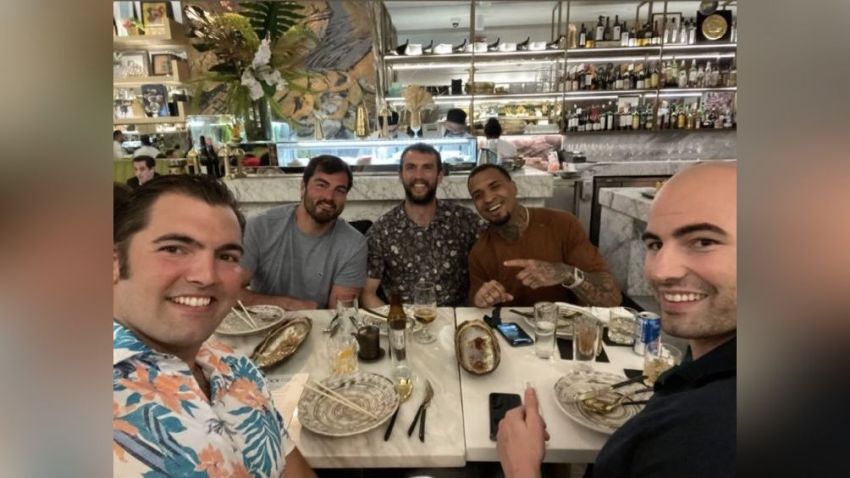 The Pittsburgh Steelers’ offensive line was gutted this past offseason. Between longtime center Maurkice Pouncey retiring, right guard David DeCastro having an ankle injury that resulted in him being waived (and likely retiring himself), and losing Alejandro Villanueva and Matt Feiler in free agency, their trenches had a very different look in 2021, for better or worse.

Their three former Pro Bowl linemen, however, recently met up, apparently, according to Pouncey’s Instagram stories yesterday, where he appeared with DeCastro and Villanueva—as well as retired Indianapolis Colts quarterback Andrew Luck, who was teammates with DeCastro while they were both at Stanford in college.

Some Goon Squad members together on IG with Andrew Luck as well #Steelers pic.twitter.com/lU3SZOsUML

Also at the table is another person, which I speculate may be Iñaki Villanueva, the younger brother of Alejandro. Though he is a professional rugby player in Spain, and even competed in the Olympics, he actually did once try out for the Steelers in 2016 as a tight end. That’s my best guess for now, anyway, and I very obviously can be wrong. If anybody happens to know who it is, feel free to correct me.

As far as I’m aware, Pouncey is the only one at that table who even uses social media. Villanueva and DeCastro somewhat famously shied away from ever (at least publicly) setting up social media profiles for themselves. The closest thing Luck ever had to social media was a parody account for Capt. Andrew Luck, portraying him as an officer during the Civil War.

Alejandro Villanueva is the only one in the picture currently playing in the NFL, of course. After spending the previous seven seasons with the Steelers, he signed a two-year contract with the Baltimore Ravens in 2021. He began the season at right tackle, but moved to the left side, his natural position, after Ronnie Stanley went down again.

At 33 years old, it’s unclear what his future holds. He is due $6 million in 2022. If Stanley successfully returns, Villanueva could be a cap casualty, with Patrick Mekari able to play right tackle. They also signed the injured Ju’Wuan James, who will be ready to play next season. If released, Villanueva may very well retire himself.

Alternatively, this photo could mean that Andrew Luck is going to come out of retirement to be the Steelers’ next quarterback. I’m kidding, of course, though it sure would be nice, wouldn’t it? The kid was pretty good at slinging the ball.

Pittsburgh doesn’t have much going on these days outside of the core of their past two decades fading away into retirement. This image of three-fifths of their primary offensive line from the past decade is yet another reminder of how much is changing—and also of how much opportunity was wasted without another championship. Nobody in that picture ended up with a Super Bowl ring, sadly.