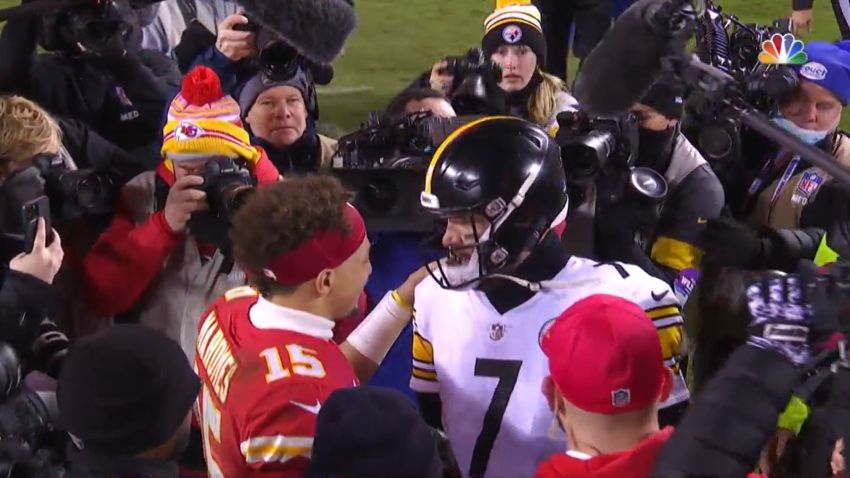 The Kansas City Chiefs’ Patrick Mahomes is one of the great quarterbacks and great players in football today. He’s already got one Super Bowl title, and he’s looking to appear in his fourth straight conference finals. With his commanding victory over the Pittsburgh Steelers yesterday, he’s one game closer to that.

The Steelers are one game closer to nothing. And they have no games remaining with Ben Roethlisberger, the 18-year veteran quarterback who has all but said that he is retiring, without using the R-word. He and Roethlisberger are the two youngest quarterbacks to ever win a Super Bowl, so the final meeting seemed fitting, in a way, and they shared a moment after the game.

“He’s a tremendous player that I have a ton of respect for. The way he plays the game, the competitor that he is, you can’t take that stuff for granted”, Mahomes said of Roethlisberger after the game. “To be able to battle to the very end every single year – he’s won Super Bowls. He’s a guy that I’ve watched growing up, I have a ton of respect for him and that’s what I told him, that if this is his last game, he did it the right way. Everybody knows that and you show him a ton of respect going out there”.

Of course he didn’t exactly send the 39-year-old off in fitting fashion throwing for over 400 yards against his defense with five touchdown passes. Roethlisberger barely mustered 200 yards on 44 attempts, with a pair of too-little, too-late scores.

It’s where things have been heading for a while now, and a lot of it does have to do with the offensive line. One wonders how much better things might have been able to be over Roethlisberger’s final two seasons if the Steelers were able to address the issues up front, allowing him to spend more time in the pocket reading defenses, and to actually have a consistently complementary running game.

But I don’t know that you’ll find too many people who would deny that it’s time to move on, one way or another. They gave it one final push, and the Steelers provided us with some excitement and memorable moments at the end of the regular season—and in about the first 20 minutes or so of yesterday’s game—but reality crashed down hard soon after.

Roethlisberger will now be getting on with his life’s work, which in his case will consist primarily of being a family man to his wife and three children. After all he’s given to the team, and to the city, he is entitled to a quiet retirement.