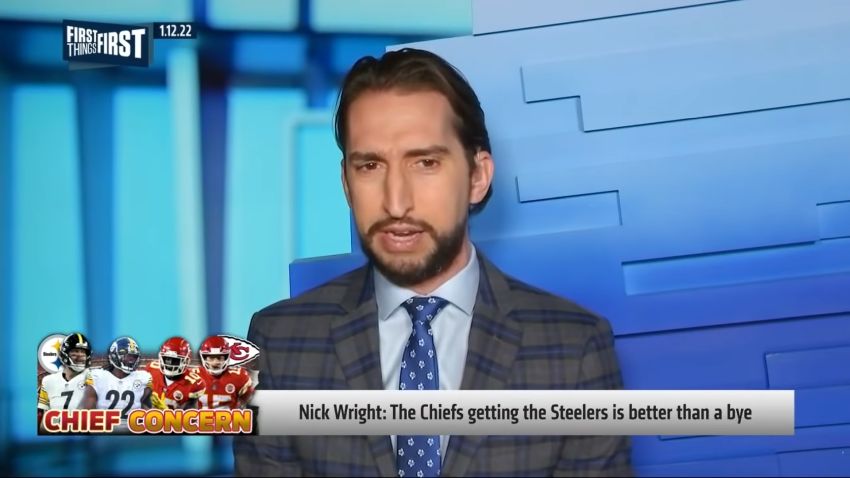 Do you know who Nick Wright is?

If you have already suffered such a misfortune, would you like to hate him even more than you already do? While it may be the case that hating him means he’s good at his job—it appears his function is to be an annoying prick, as is frequently the case among television personalities today, not just in sports—his diatribe about how ineffectual a challenge the Pittsburgh Steelers will be was pure theater.

Should KC fans be worried about Big Ben & the Steelers?

“Worried?! No. This is actually Better than a Bye. Get some cardio in, knock off some rust, have no chance of losing & just be rolling when the playoffs actually start for the Chiefs, in the Divisional Rd.” — @getnickwright pic.twitter.com/Fx6ucv4pBh

When framed the question if the Kansas City Chiefs should be worried about the Steelers, he replied, “Worried? No! No! No no no no no no. This is actually better than a bye. Get some cardio in, knock off some rust. They have no chance of losing. They can work on some things and be just rolling when the playoffs actually start for the Chiefs, the same weekend they’ve always started for the Chiefs under Mahomes, the Divisional Round”.

The Chiefs have had a first-round bye in each of the previous three postseasons, it is true. They have played in the past two Super Bowls, and the past three AFC Championship Games. The only quarterback Mahomes has lost to in the postseason is Tom Brady, currently 6-2.

And yes, the Chiefs are probably going to win. Let’s be honest. But you have to be either really annoying or financially motivated to be as obnoxious about it in public the way Wright was. He even went on a rant about how he had moments of worry that the seventh seed could end up being the Raiders, the Colts—or even the Ravens.

“I will admit, there was a moment there that caused me a bit of consternation”, he said. “Seventh seed, if the Raiders-Chargers thing is a tie, we get the Raiders, and we’ll beat ‘em, but going 3-0 against a team is tough, and the Raiders did beat the Chiefs in Arrowhead a year ago and then did the victory laps”.

“But then it’s Big Ben. Did you hear what Mike Tomlin said? Mike Tomlin said he went to bed during Chargers-Raiders”, he went on. “Do you think maybe he was dreaming of a tie? Do you think Big Ben was watching that game quietly, privately, rooting for a tie? Go out on top. You have a nice couple back-to-back wins”.

Of course, there is literally video of the moment that Roethlisberger learned there was a winner and that he would be going into the postseason, and he was clearly pretty damn happy about it. But that doesn’t help a schmuck make his point, even though that video had already been out there by the time his disgraced the airways.

“Yeah, better than a bye”, he said in wrapping up his segment. “Yeah, we can overlook ‘em. We’re looking over the horizon”. If there’s any such thing as bulletin board material, the Steelers should be installing a bigger bulletin board for this one.