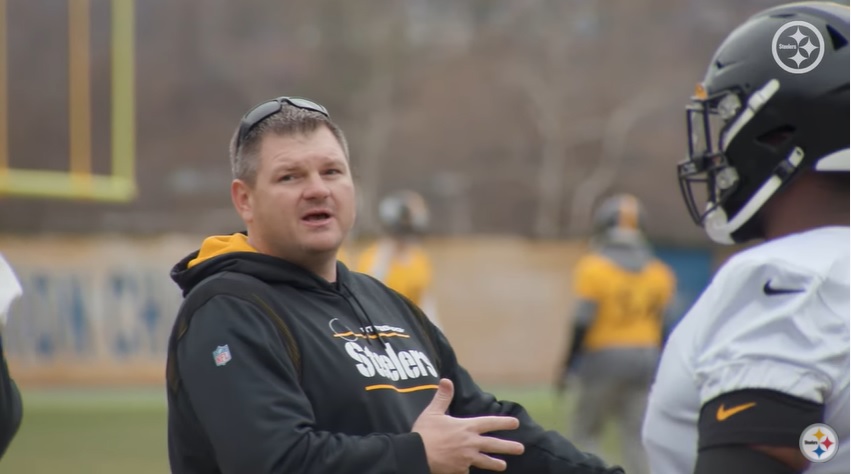 Chris Morgan is serving as the Pittsburgh Steelers’ interim head offensive line coach, taking over for Adrian Klemm, who was allowed to leave early to take his new job at Oregon. All Morgan did in his first game in that role was see the Steelers rush for 190 yards, the most they’ve recorded in well over four years. It’s not a bad way to make your case to keep that job for next season and speaking to reporters Tuesday, Mike Tomlin praised the job Morgan did.

“I thought he had a tremendous impact,” he said via the team’s YouTube channel. “I don’t want to overstate it. Obviously, he ran the offensive line room and made critical decisions regarding the division of labor and the formulation of the plan. He’ll do similar things this week.”

Tomlin may not want to overstate it, but calling it a “tremendous impact” is a ringing endorsement. It sounds like Morgan was the one who decided to start J.C. Hassenauer at center over Kendrick Green, a relatively easy decision given Green’s lack of practice time, but still one that paid off for Pittsburgh. Hassenauer wasn’t the only reason why the Steelers had their best rushing output since 2017, but he certainly aided in those efforts.

Overall, the Steelers’ line generated a good push at the point of attack, allowing Najee Harris to hit the hole with speed and better churn out yards after contact with some momentum at his back.

Pittsburgh seemed to rely on inside zone runs more often, a staple of Morgan’s run games when he served as the Atlanta Falcons’ O-line coach from 2015-2020. For several seasons there he worked alongside Kyle Shanahan and the Alex Gibbs/Mike Shanahan zone-blocking scheme that churned out 1,000-yard backs year after year. Najee Harris told the media his two longest runs of the night, 32 and 37 yards, were both inside zone schemes.

While Morgan’s debut performance grades out extremely well, it was just one game. Finding consistency with the ground game is the key Pittsburgh’s been missing for far too long. Tomlin recognized the run game must have a similar performance against the Baltimore Ravens, who come into the game with a top-five run defense in most metrics.

“We had a great run day but that’s just the day. I’m looking forward to watching his contributions and our plan to develop this week and adding to that body of work.”

Pittsburgh’s likely to at least conduct interviews with outside candidates this offseason, just as they did with Adrian Klemm this offseason (something they did not do with Shaun Sarrett). But given Morgan’s experience and last night’s performance, odds are strong he’ll keep his head coach label into next year.