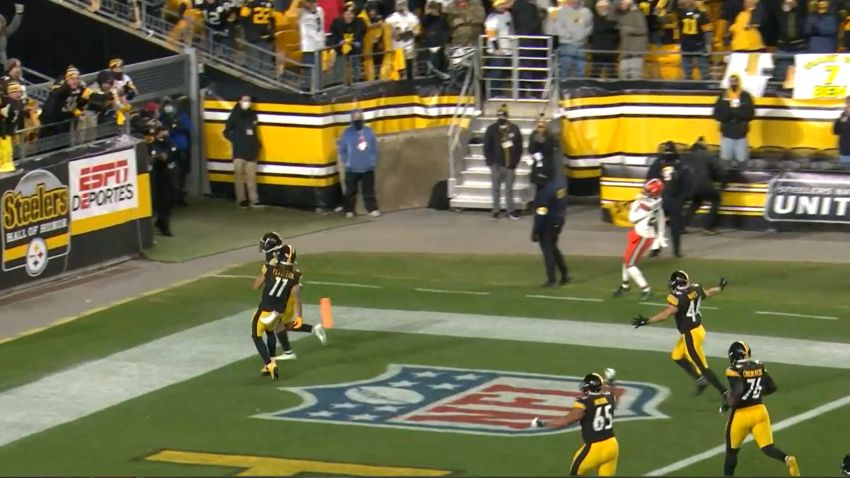 He broke the record on the Steelers’ final meaningful drive of the game, during which he rushed for 45 yards on three carries, including a game-sealing, 37-yard breakaway touchdown. That put him at 188 rushing yards on the night, surpassing Bam Morris’ rookie single-game mark of 146 rushing yards, set in 1994. Harris had 143 yards entering that last drive.

He wasn’t supposed to finish it off that way, though, even if nobody really complained at the end. The score put the Steelers back up by 12 points, but it also gave the Cleveland Browns the ball back with 51 seconds. Had he not scored, but just gotten the first down, they could have ended the game right there.

That’s what he was supposed to do. He said that Ben Roethlisberger told him “to get down”. He laughed, then added, “I didn’t get down”. Of course Harris was understandably excited in that moment, breaking off the longest run of his career to close out Roethlisberger’s final home game.

More specifically on what he’d heard from his quarterback on that final drive, the rookie told reporters that Roethlisberger “said, ‘just get what you can and protect the ball. Get what you can only’. And I went down the sideline and everybody was like, ‘Get down! Get down!’ I was like, ‘Nah’”.

Harris’ career day helps to make his overall rookie numbers look much better. He’s now just four attempts away from 300, rushing for 1,172 yards on 296 attempts, averaging 3.96 yards per carry, with seven rushing touchdowns, 70 receptions for 440 yards, and three more touchdowns. His 10 all-purpose touchdowns are one off the franchise rookie record as well, held jointly by Franco Harris, Chase Claypool, and Louis Lipps (who had 10 touchdowns from scrimmage and one return touchdown).

Stefon Logan totaled 1,751 all-purpose yards for the Steelers in 2009 as a first-year player; however, he was not a rookie, first going undrafted in 2007 before going to the CFL. He stands second place all-time in CFL history in return yards with 11,970, by the way, and played as recently as 2019. He was part of the Montreal Alouettes’ All-Decade team for the 2010s.

Just a fun fact to end this discussion. Bottom line, I don’t think anybody really minds that Harris didn’t get down.