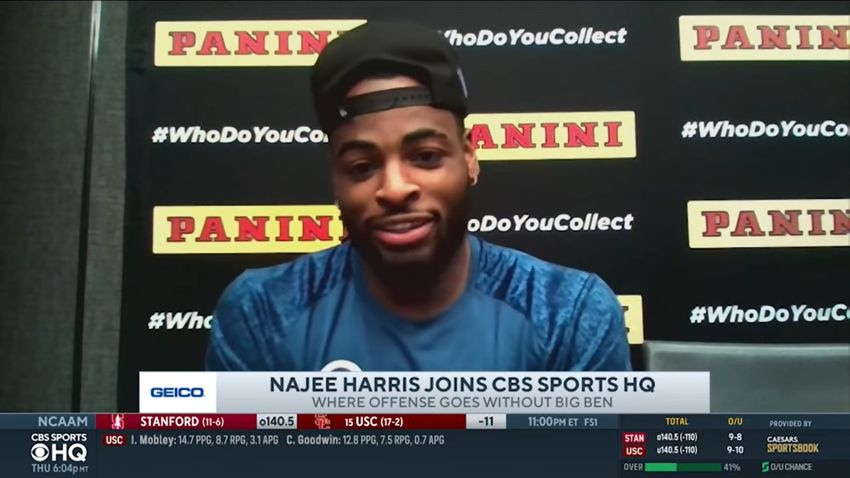 We have some players making the rounds through the media with the Pittsburgh Steelers already long eliminated from the postseason. Rookie running back Najee Harris is one of them, and unsurprisingly, on the day of quarterback Ben Roethlisberger’s retirement, the back was asked about what he looks for in the team’s next starter at that all-important position.

“One thing that I’m looking for is somebody who’s a grinder, and who’s willing to stay late and study and really learn the ins and outs of a playbook, maximizing his players on the team”, he told Hakem Dermish during an appearance on CBS Sports today. “A leader. For me, I would want somebody who wants to win, and who’s competitive just like me”.

Roethlisberger, of course, defined the competitive spirit, although one could argue that most of that was during Harris’ younger years. Then again, Harris always talks about being a football fan and having grown up watching Roethlisberger play, and he said again in this interview.

There’s names that pass my mind. I don’t really know the scenarios of everything, but, Deshaun Watson’s always in there. Aaron Rodgers, obviously, I like. I don’t know how close he is to coming to retirement, but he’s somebody I think. Even guys like Jimmy [Garoppolo], I like him, too. Just a guy who wants to come in here and compete. I think that will fit the offense, and fit the game for sure. I just love the game, though, really much, and whoever’s over there, I’m just happy to play with whoever.

It’s hard to imagine the Steelers trading for Watson, for numerous reasons, and as far as I know they have never been connected to any rumors about interest in acquiring him, though certainly, prior to his off-field concerns, he would have been a very desirable acquisition. Rodgers has flirted with the Steelers in recent months, but it’s unlikely anything would come of that.

Garoppolo is obviously by far the most realistic of the three, starting with the fact that he will could reasonably be released this offseason (especially if he blocks any trade attempts, since he has a no-trade clause), and the San Francisco 49ers just drafted a quarterback in the first round last year, clearly signaling that he’s not the future. He will be participating in the AFC Championship Game this weekend.

As for the Steelers, right now, the favorite to be their starter in 2022 is Mason Rudolph, entering his fifth season since the team drafted him in the third round in 2018. It has already been reported that they also intend to bring back Dwayne Haskins as a restricted free agent. Beyond that, we can only guess what their plans might be, but the veteran free agent market will obviously be open.