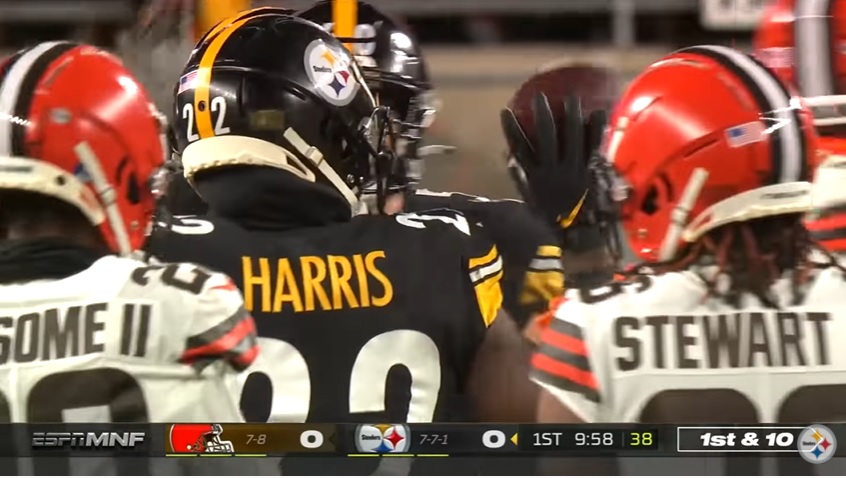 The Steelers needed a win in Week 17 for their playoff hopes. The difference-maker in the game? They won the line of scrimmage on both sides of the ball, something they haven’t done consistently in weeks.

Najee Harris put up over 200 total yards, including 188 rushing yards on 6.7 yards per carry. It was by far his most productive day as a professional. The offensive line had a lot to do with it, including J.C. Hassenauer. Hassenauer stepped in admirably at center for Kendrick Green and played a huge part in the success. Harris discussed what he saw from the offensive line in Sunday’s victory.

“Yeah, of course I saw a difference,” Harris said Wednesday via the team’s website. “They played with a lot more energy. It’s not like they haven’t been playing with energy, it’s just that they executed. I think that it really came down [to] execution. I think they executed us as a team in the run game.”

The Steelers were creating push on the Browns’ front seven all game long. In an up-and-down season, Harris has now had two great performances against the Browns. In Week 8 in Cleveland, he had 120 total yards and a touchdown.

He continues to be a positive on a Steelers team that is likely not going to make the playoffs. After some missed holes on Week 16, Harris described what he improved on from the previous week against the Chiefs.

“On my part, I didn’t do a lot of guessing. I was hitting a lot of stuff downhill, pressing a lot more, [and] trying to get backers to overplay gaps and stuff like that. The o-line really did their job, firing off the ball and working on the backers. [They were] really making movement and push on short distances.”

While the O-line did their part and showed growth, Harris’ performance was still yards gained by himself. Next Gen Stats showed just how many of Harris’ yards were picked up after contact, the third-most for a RB since 2016.

According to @NextGenStats, rookie RB Najee Harris gained 181 of his 188 yards after contact against the Browns, which is the third-most in a game in the NGS era (since 2016). #Steelers pic.twitter.com/MgWfl9U2ee

Certainly, the offensive line still has a ways to go before reclaiming their status as one of the league’s best, as they were a few seasons ago. Week 17 was a step in the right direction, and a combination of that blocking and Harris’ tough running is scary for opposing defenses in the future.