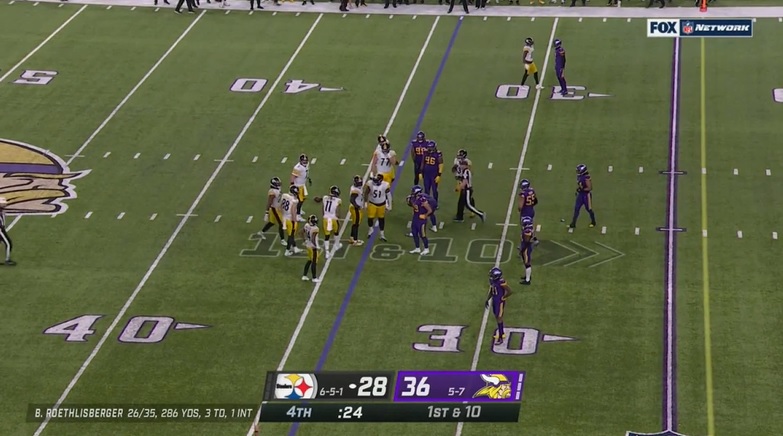 Trai Turner is moving on to Tennessee. Though it’d be easy to focus on what happened last Thursday night, Turner says he isn’t commenting on what happened between he and Chase Claypool at the end of their loss to the Minnesota Vikings.

By now, you know the story. After catching a 4th and 1 slant with less than a minute to go in Week 14, WR Chase Claypool celebrated the conversion, using up precious time off the clock. The veteran Turner ran over to Claypool to take the ball away and hand it to the ref. The ball got knocked out by a Vikings’ linebacker and more time came off the clock before Ben Roethlisberger managed to spike it.

After the spike, an animated Claypool was seen screaming at Turner.

Claypool mad at the ref or Turner here? #Steelers pic.twitter.com/V7KOpbeHle

Wednesday, Turner was asked about the moment, but punted on the question.

“It’s family business,” he said in audio provided by the team. “Deal with it internally. Take care of it internally. Address it. It’s been addressed by a few people.  Gonna move on and gonna worry about the Titans and this week forward.”

Turner didn’t specify the “few people” who addressed it, but you can figure it was head coach Mike Tomlin and wide receivers coach Ike Hilliard. Though Claypool made a pair of impressive contested catches Thursday, he struggled with mental mistakes with penalties, near-fumbles, and poor clock management. You have to wonder what was going through Turner’s mind with Claypool hopping mad at him for trying to get the clock stopped.

But Turner has been a professional and leader this season, especially along a young offensive line. He understands saying anything other than what he did would keep the story bouncing in media circles. And though Claypool’s actions were damaging and unacceptable, it’s time to move on. As Mike Tomlin noted Tuesday, Claypool’s goal the rest of the season is to show continued growth, development, and learning from those mistakes.

That’s a cue the entire offense could take after its miscues in their Week 14 loss, making Sunday’s game against Tennessee a critical game to win.