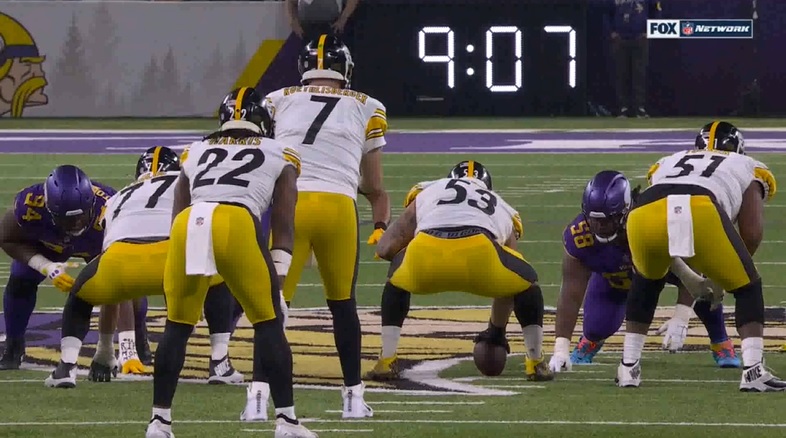 Pittsburgh Steelers rookie center Kendrick Green has had a bit of a rough go of it this season, and more recently, his issues have bled into not just post-snap concerns, and the snap itself, but also pre-snap issues. On Thursday, in particular, he had issues simply getting the snap off when he was supposed to.

Quarterback Ben Roethlisberger earlier today likened it to a game of ‘telephone’, where by the time you get from the first link of communication to the final link, the message could get jumbled. But veteran guard Trai Turner, who is a part of that communication chain, has little doubt that this particular issue can be fixed.

“Sometimes when you’re in the heat of the battle, things happen. It’s just something that we have to fix”, he told reporters earlier today when he was asked what he can do to help Green. “It’s an issue that everybody sees, so we see it. We know how to address it and we know how to fix it. That’s what we’ll be doing this week, and, hopefully, moving forward, not to have those problems”.

I’m not a lineman and don’t know all the moving parts involved, but as a layman, I would imagine it should be a pretty quick fix—as in, when I give you a slap, snap the ball. While we don’t know the full context of the play, there was one snap in the game in which Green just simply refused to snap the ball, or so it appeared.

And of course, because it was so obvious for everybody to see, during a nationally televised game, it has gotten plenty of attention. But the bottom line is that it is an unforced error that should be easy to avoid, and is something that they need to and should be able to clean up very quickly.

Green was a third-round draft pick out of Illinois, selected to play center, even though the bulk of his college experience had come at guard. He has started every game this season, filling in the role for Maurkice Pouncey, who manned the position for 11 seasons before him.

While he has had a couple of bright spots here and there, overall, it has been a rocky rookie year for him, spending an inordinate amount of his time being knocked to the ground—not necessarily due to a lack of size or strength, but rather inconsistent technique or a lapse in awareness.

Head coach Mike Tomlin talked over the past week about being open to making changes in personnel, specifically addressing the offensive and defensive lines. At least so far, there haven’t been any indications of a change at center—but then again, their other centers have been on the Reserve/Injured List or otherwise available.

J.C. Hassenauer has begun practicing, and would be eligible to be activated from the Reserve/Injured List in time for the team’s next game. His return would at least give them an option to consider, even if they decide not to pull the trigger.