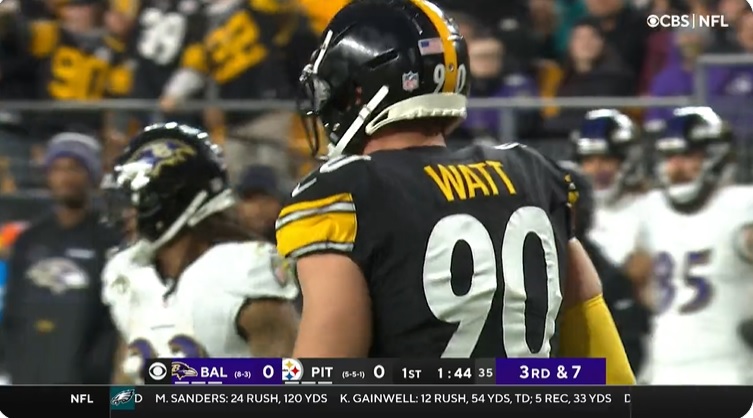 In news that should come as absolutely zero surprise, Pittsburgh Steelers OLB TJ Watt has been named Week 13’s AFC Defensive Player of the Week for his terrific performance Sunday against the Baltimore Ravens.

Watt finished Sunday’s win with six total tackles, six QB hits, 3.5 sacks, three tackles for loss, and a forced fumble. It was arguably his best individual performance of the season despite missing the entire week of practice due to being placed on the COVID list. Watt also had multiple key pressures in the win, leading to a Minkah Fitzpatrick interception and the game-winning two-point conversion stop, forcing a slightly inaccurate throw that TE Mark Andrews couldn’t haul in.

His 3.5 sack game makes him the NFL’s current sack leader with 16 on the season, tying James Harrison’s franchise record. He’s the first Steeler with 3.5 sacks in one game since Harrison did so in 2007, which also came against the Ravens.

He is now in earshot of the single-season sack record, needing seven sacks over the final five games to break Michael Strahan’s official number. He is the clear frontrunner to win Defensive Player of the Year, ahead of names like Cleveland’s Myles Garrett and Dallas’ Trevon Diggs.

Watt now has 65.5 career sacks, fifth most in team history, and third most since 1982. He’s on pace to become the team’s franchise leader by next season, just his sixth in the league.

This marks the second time Watt has been named Defensive Player of the Week this season. He was given the award in Week 6 for his primetime performance against the Seattle Seahawks.