Today I wanted to look at some data for the season, discuss takeaways for the Pittsburgh Steelers Week 15 matchup against the Tennessee Titans on Sunday afternoon, and pose some questions for you the readers.

First, let’s look at quarterbacks with the following data points from Next Gen Stats: 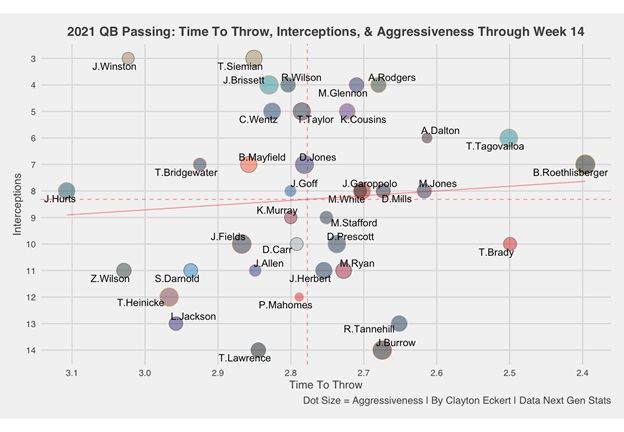 Steelers quarterback Ben Roethlisberger still leads the NFL with the quickest time to throw number at 2.4 and aggressiveness (19.6%), with fewer interceptions than many quarterbacks (7), though there have been several near interceptions. Pittsburgh will really need him to build on his impressive play from the second half in Week 14, and hopefully the loss will accentuate the need for a better start in the first half.

Titans quarterback Ryan Tannehill has the sixth quickest time to throw number of 2.65, along with ranking 17th in aggressiveness (15.7%) but more interceptions (13). This highlights both quarterbacks having quick release times, with Tannehill throwing less into tight coverage but turning the ball over at one of the highest rates in the NFL, which hopefully the Steelers defense can capitalize on.

Which quarterback will have the better game? 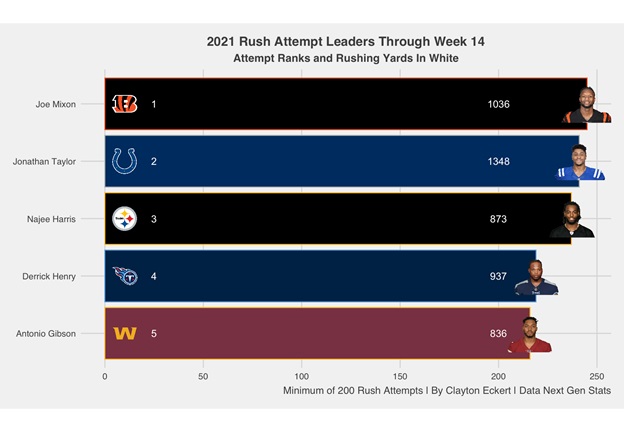 Pittsburgh running back Najee Harris has finally surpassed Tennessee running back Derrick Henry in attempts, but still edged out in yards on five fewer games! This reminds us what a huge loss the Titans suffered when Henry went down, and what a special talent he is.

In his absence, Titans running back D’Onta Foreman was signed to help replace Henry, and has led the way with 55 carries, 240 yards, a touchdown, and a fumble. Dontrell Hilliard has appeared in Tennessee’s last three games, providing 25 carries, 179 yards, and a touchdown but two fumbles. Jeremy McNichols is in the mix as well, and although he has appeared in the most games (11) has only 26 carries for 85 yards and no touchdowns. He does lead the running backs in targets with 30 for 215 yards and a touchdown.

How will the running backs fare?

Next let’s look at a matchup view for the wide receivers with the following data points: 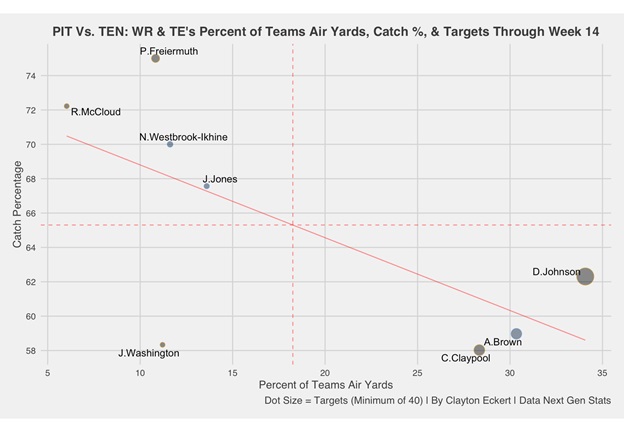 Steelers wide receiver Diontae Johnson leads the graph in percent of teams air yards at 34.07% and six touchdowns! Johnson’s 130 targets are third in the NFL, with 81 catches for a lower NFL rank at ninth for a 62.3 catch percentage in his 12 game appearances. Hopefully he can have a big game and high completion percentage considering Titans cornerback Jackrabbit Jenkins is ruled out for the game. Titans wide receiver A.J. Brown is on injured reserve, but the highest percent of teams air yards at 30.34% and three touchdowns in the 10 games he has played, with 78 targets and 46 catches but a lower catch percentage of 58.97%!

Pittsburgh wide receivers Chase Claypool and James Washington have really struggled connecting with Roethlisberger this season. Claypool has the second most percent of teams air yards for the team at 28.34, one touchdown, but a low 58.02 catch percentage on 81 targets, and only 47 catches. It’s vital for team success that this improves, along with a hopeful display of lessons learned with the negative antics and situational awareness in recent memory. Washington has a 58.33 catch percentage on his 36 targets, 21 catches and two touchdowns. It would be huge if he could build on recent successes with Roethlisberger down the stretch, especially if Claypool doesn’t step up consistently.

Tennessee wide receiver Julio Jones has only played in seven games, highlighted by his low 13.6% of teams air yards. He has had an excellent career and will be important to account for. He has maximized his 37 targets for 25 catches for a 67.57 completion percentage, but no touchdowns! Hopefully the Steelers can limit his connection with Tannehill, and it will be interesting to see if Joe Haden is able to play considering his questionable status on the final injury report. Titans wide receiver Nick Westbrook-Ikhine has played the most for Tennessee, only missing one game. He has garnered 36 targets (the same as Jones) but more receptions at 28 for a higher catch percentage of 70 and three touchdowns! It will be interesting to see how Pittsburgh’s defense game plans against the wide receivers, and if they bracket coverage Jones, Westbrook-Ikhine could break loose for some big plays.

Pittsburgh wide receiver Ray-Ray McCloud has seen more action as the season has progressed, with 36 targets and 26 catches for a 72.22 catch percentage! He has provided mostly short routes for Roethlisberger to check to along with Harris and has been reliable in that regard but hope to see him break more tackles and provide more yards after catch. Steelers tight end Pat Freiermuth leads the graph in catch percentage at 75% on his 60 targets 45 catches, and seven touchdowns! Unfortunately, he could not make the touchdown grab on the final play last week for a near epic comeback to add to this total, but I hope and suspect Roethlisberger will get him involved early and often for a big game in this matchup.

The Titans use multiple tight ends frequently, with three players above 300 snaps and none below 11 games played. Interestingly no individual has more than 33 targets in the pass game, highlighted by none of their players at the position landing on the graph. Anthony Firkser leads the team in targets with 33, 24 receptions for 179 yards and a touchdown. Geoff Swaim has 29 targets, 23 receptions and two touchdowns, and MyCole Pruitt has 17 targets, 13 receptions for 144 yards and three touchdowns along with being their highest graded run blocker per PFF.

Which wide receiver(s) will have a big game? How about tight ends? 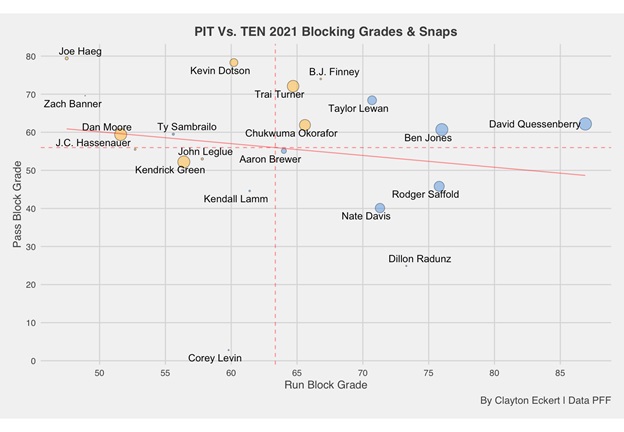 The Titans have graded well overall as run blockers, highlighted by right tackle David Quessenberry, who leads the matchup with an impressive 86.9 run block grade. It is crucial that Steelers linebacker T.J. Watt can win this matchup, especially in the run game to provide a hopeful improvement to the Achilles heel that is the Pittsburgh run defense. Tennessee center Ben Jones has the second ranked run block grade and above the mean in pass blocking along with Quessenberry, and it will be interesting to see how Pittsburgh defensive lineman Cameron Heyward and the position group fare in the middle. Titans guard Rodger Saffold is another highly graded run blocker but ranks lower with a 45.8 pass blocking grade. He was listed as out for the game, along with offensive lineman Aaron Brewer listed as questionable, so it will be interesting to see who plays left guard in the matchup. Nate Davis is the other starting guard for Tennessee, also with a 70+ run blocking grade but an even lower 40.1 pass block grade, hopefully the Steelers defensive front can provide consistent push and pressure in the pass game with no Titans lineman above a 70 pass block grade. Left tackle Taylor Lewan is the highest graded pass blocker for the Titans at 68.4, and it will be interesting to see how Pittsburgh linebacker Alex Highsmith fares getting pressure in the matchup.

Pittsburgh has only two starters above the mean in run blocking, right tackle Chukwuma Okorafor (65.6) and right guard Trai Turner (64.7), highlighting an opposing issue similar to Tennessee, faring better as a unit in the passing game according to PFF (aided by Roethlisberger’s quick release) but weaker overall in the run game. Turner has the highest pass block grade of the current starters at 72.1, the only 70+ grade for the team and Okorafor’s pass block grade is ranked second for the Steelers starters. The Steelers activated Joe Haeg from the COVID list this week, having the highest pass block but worst run block grades on his limited snaps, along with the possibility of fellow lineman J.C. Hassenauer being activated to the roster Saturday, so it will be very interesting to see who starts at left guard considering Hassenauer was Kevin Dotson’s original replacement following his injury. Center Kendrick Green lands below the mean in both data points, and left tackle Dan Moore is the lowest graded run blocker for Pittsburgh at 51.6 but an above the mean pass blocking grade at 59.4. It will surely be interesting to see how the offensive line performs against the Tennessee defensive front and a key factor in the game.

Who will win the battle of the trenches?

To wrap up, let’s look at the defenses using allowed yardage: 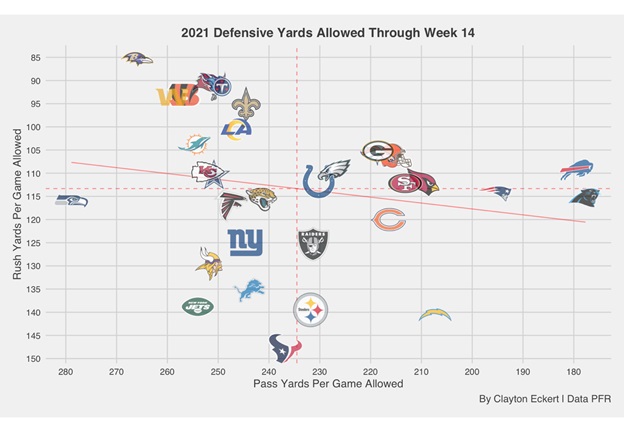 Right away we can see the Titans defense on the top left of the graph, highlighting their second ranked run defense in yards per game! This is obviously a big factor in the matchup, and while the Steelers offense will definitely want to run the ball, the success in the passing game (or lack thereof) will likely be the realistic factor on offense to hopeful victory against the Titans defense who rank 22nd in passing yards per game allowed.

Titans linebacker Harold Landry leads the team with 11 sacks, which ranks eighth in NFL! He has moved around in their defense, playing on both sides of the formation, and the Steelers offensive line better account for him to keep Roethlisberger off the ground more than last week. Tennessee safety Kevin Byard leads the team in combined tackles (69), 5 interceptions (tied for 3rd in the NFL), and 13 passes defended (tied for fourth in the NFL)! The majority of his snaps have been at free safety but moves around as well, lining up in the box and as a slot corner quite a bit. The matchup will provide a reunion with former Steelers linebackers Ola Adeniyi, and likely Bud Dupree who returned to practice for the Titans this week so we could see the latter if he is activated to the roster.

The Steelers defense lands on the bottom middle of the graph ranking 14th in pass yards, but allowing a horrid 139.5 yards per game which ranks 30th in the league! While Tennessee does not have Derrick Henry, which is a huge break for Pittsburgh, improving the run defense in this matchup and beyond is a must (understatement of the year). With defensive lineman Montravius Adams (COVID) and Isaiah Buggs (out), it will be a tall but necessary order for the available lineman that will include Carlos Davis who returned this week after missing most of the season. The good news is Watt, Highsmith, and linebacker Robert Spillane’s availability should help in this regard.

How do you think the defenses will perform?

Who will be the victor on Sunday afternoon? Thanks for reading and let me know your thoughts in the comments!