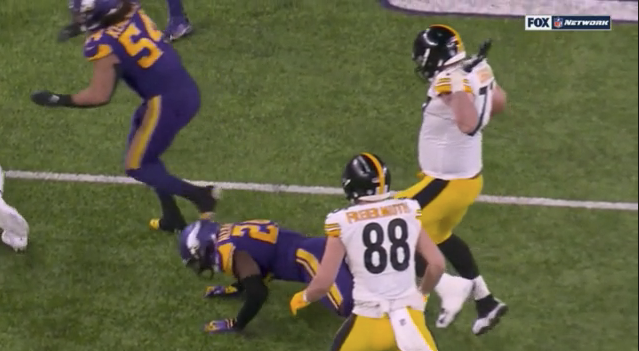 The Steelers game against the Minnesota Vikings Thursday night was one of the weirdest games during the entire NFL season. The Pittsburgh Steelers were non-existent through most of the first three quarters were only a contested touchdown catch and a two-point conversion away from overtime.

Looking at the scoreboards above, it’s hard to put into words how it even happened if you didn’t watch it. The almost-comeback was nothing short of miraculous with a massive show of heart from this Pittsburgh squad. It was eerily similar to the comeback the team had against the Los Angeles Chargers only a few weeks ago with the team crawling for most of the first three quarters and then exploding in the fourth.

These “turning points” would be a lot easier when the team that makes the crazy comeback actually wins, however, that is again not the case for the Steelers.

Therefore, we must dive deeper into what was the turning point in the game that caused this team to not be able to complete the comeback. I know a ton of readers’ minds may jump instantly to the Chase Claypool incident where he celebrated after a first down catch with only 30 seconds remaining and the clock running. While that certainly is a piece to this puzzle, let’s not be that easy on ourselves. Is there anything else that Claypool’s foolishness simply compounded for the Steelers to not have the time to complete the comeback?

Let’s dive into it.

After the Steelers scored three touchdowns in only five minutes to bring the game within nine points, their defense took the field with 12:11 left in the game. Kirk Cousins would connect with KJ Osborn on only the third play of the drive for a 62-yard touchdown to stretch the lead back out to 16.

Now, with 10:51 left in the game and going back down two touchdowns coupled with two-point conversions, the Steelers offense chose to get uber-conservative. Mind you this is directly after three consecutive scoring drives that were largely due to Ben Roethlisberger and the Steelers receivers’ carving up the Vikings’ secondary.

We can’t completely blame the offensive playcalling as the runs on first and second down were RPO’s that ended up being runs.

The two runs equaling nine yards brought up a rare 3rd & short for the Steelers while the clock is tick-tick-ticking away. This time, the Steelers called a straight-up run and the Vikings were ready for it.

Tight end, Pat Freiermuth, was simply unable to get to his down block on the Vikings defensive end, and even if he did, the rest of the line didn’t get any sort of push anyways. Najee Harris was doomed regardless.

To recap, after three-straight pass dominant drives that resulted in touchdowns and being down 16 points with only 10 minutes left in the game, the Steelers ran the ball three times to start their drive.

On fourth down the Steelers look to go for it as they look to reconcile the mistake of this three-run drive that went nowhere.

However, the Vikings came out in a defensive look that Roethlisberger wasn’t comfortable with presnap. He looked to audible the call with the play clock running down. The Steelers draw a delay of game and Tomlin ends up sending out the punting unit on 4th & 8.

The delay of game would become a theme for the lack of urgency this team had in the last quarter. The three-run drive took 1:55 off the clock and the ensuing Vikings drive took off another four minutes before the Witherspoon interception that gave this team another chance. Simply put, this was an inexcusable drive at that point in the game. It is largely being overlooked due to the events that would follow. I believe that was the turning point of the game for the Steelers.

Let’s look deeper into the time aspect though.

Fast-forwarding in the game, the Steelers’ last drive consisted of numerous miscues that held this team back. After the Steelers’ next touchdown and defensive stand, it would bring out former Steelers punter, Jordan Berry. He booted a 53-yard punt  that should have been fair caught by the returner, Ray-Ray McCloud.

McCloud inexplicably lets this ball bounce at the 11-yard line. The rule is typically to have your heels on the 10-yard line and anything over your head you let go. This mistake by McCloud not only costs the team seven yards (the ball was eventually spotted at the four) but it also costs the team four seconds due to the ball bouncing and not being fair caught.

The next miscue came from last week’s unlikely star on the offensive line, John Leglue. On a screen pass, as he’s looking to find work, he runs into a cornerback and shoves him in the back. It had zero impact on the play. It looked morel like instinct than anything, but just a silly play that cannot happen at that point in the game.

Claypool’s screen pass that was eventually negated by the block in the back, took the ball all the way to the Vikings’ 42. Time-wise, you may say hey it was right before the two-minute warning, no big deal.

However, with the ball being moved all the way back to the Steelers’ 40-yard line this would loom large for the team as it took a whole 1:30 off the clock to regain that yardage back.

Ironically, the play that took them past the point of where they would have been before the block in the back will be on the next clip we’ll be discussing, the Claypool fourth-down conversion catch.

We’ve made it to the part of the game that every national and local media member had field days on. I think Claypool deserves every last criticism he gets because it was a selfish play, a “me me me” play. I won’t get into all of that because that’s not the point of this article. If Claypool gets up with the ball without celebrating and marks it himself, I’d say this ball is snapped right around the 0:30 mark of the game. So in total, we’d say this lost roughly six seconds of the game.

The complete lack of urgency from the entire Steelers team lost this game. Was Chase Claypool a factor? Yes, but all around the team has to look in the mirror and ask themselves what they could have done better. Regardless of all the miscues the Steelers still had a chance to win the game. However, when you waste 1:40 of the last 2:00 of the game, you’re going to be in some trouble.