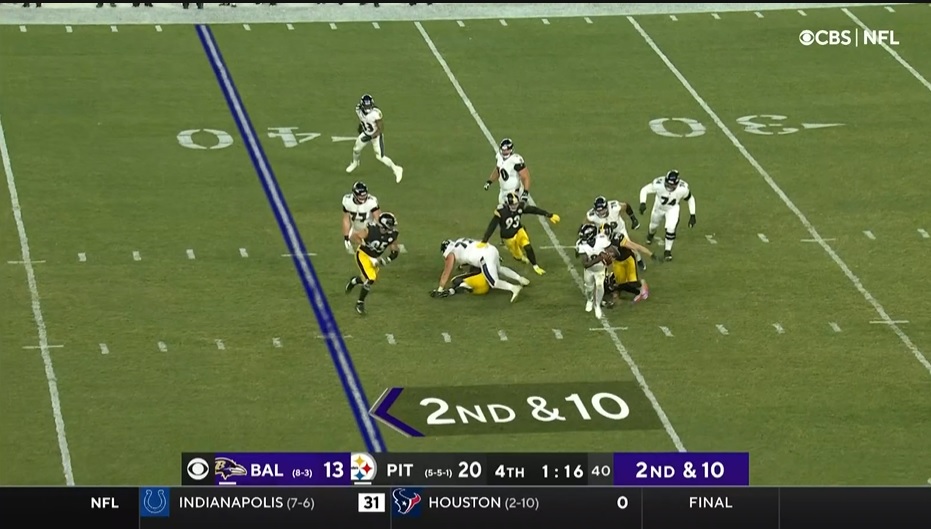 It was Pittsburgh Steelers vs. Baltimore Ravens. So you knew it was going to be a weird one. Here’s some weird stats.

– If you were wondering, 20-19 is not Scorigami. In fact, this isn’t even the first 20-19 game in Steelers/Ravens history. Pittsburgh won by the same score back in October of 2005.

– Going to hit you with my favorite stat of the weird right now. T.J. Watt has 65.5 sacks in his career. That’s the most of any Steeler through the first EIGHT years of their career. Watt isn’t even done with his FIFTH.

– Watt is the first Steeler with 3.5 sacks in a game since James Harrison in 2007…also a win over the Ravens (the famous 75th anniversary game). Since the start of the century, the only Steelers to do it are Watt, Harrison, and Joey Porter in 2001. Porter had four.

– Last stat on Watt. His six QB hits are the most in a game by a Steeler since…T.J. Watt, in a 2018 win over the Falcons. Most by a Steeler who isn’t him since Jason Worilds – wouldn’t have guessed that – in 2013. Since 2006, the only other Steeler to do it was James Harrison, who did so twice.

– Chris Wormley’s 2.5 sacks today are a career high. In fact, Wormley had never had more than one sack in a game in his entire NFL career. He had more sacks today than he had in any season prior to 2021, and doubled his sack total on the year from 2.5 to five.

– Wormley’s 2.5 sacks today are the most he’s ever had in a game, college or pro. His previous record was two, set in a win over Rutgers more than six years ago, way back in 2015.

– Pittsburgh sacked Lamar Jackson seven times today, the most he’s ever been sacked in a regular season game. He was sacked seven times by the Chargers in a playoff game.

– It’s only the second time the Steelers’ defense has dropped the Ravens seven times in one game. The other coming in 1998 in a 16-6 Pittsburgh win. That day, Eric Zeier (did not believe that was a real person until I looked him up) and John’s brother Jim Harbaugh were sacked a combined seven times. Oliver Gibson led Pittsburgh that day with two sacks.

– The Steelers are back on pace for their fifth straight 50+ sack season. That streak had been in jeopardy for most of the year.

– Najee Harris had 21 carries Sunday, his sixth game of having 20+ rushes. That’s a Steelers’ record, breaking a tie with Le’Veon Bell. Franco Harris, if you can believe it, only had two his rookie year.

– Sunday was the first 100+ yard, 2-touchdown performance in Diontae Johnson’s NFL career, and his first since a 2018 college win over Miami (FL).

– Minkah Fitzpatrick didn’t have an INT in 15 games. He now has one in back-to-back games.