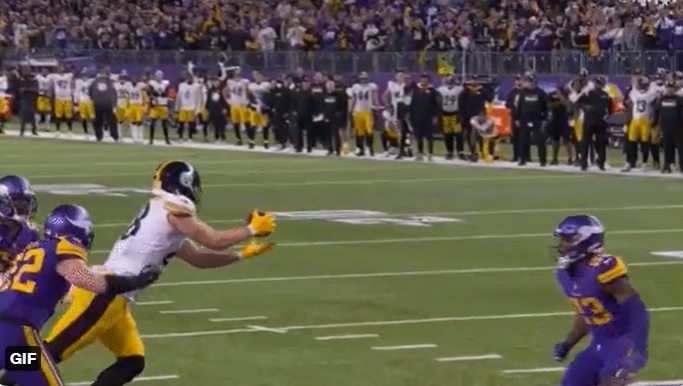 Thursday’s final play did not work out as well as Sunday’s did. Facing pressure, Steeler quarterback Ben Roethlisberger laid a perfect pass in to tight end Pat Freiermuth, who was already being covered and had both Minnesota safeties moving in to help defend. Freiermuth began to bring the ball in, before Vikings’ safety Harrison Smith punched it free to force the incompletion and win the game for Minnesota.

Ben Roethlisberger to Pat Freiermuth at the end #Steelers pic.twitter.com/ykkjhMMgbJ

The incompletion ended what had been a 28-point comeback from Pittsburgh, who had trailed 29-0 late in the third quarter. It also dropped the team back to .500, at 6-6-1. It was a play call that almost worked, to who has been the team’s most dependable target this season that close to the end zone, and speaking with the media after the game, Freiermuth’s quarterback didn’t want any blame on the play going to the rookie tight end.

“I trusted that he was gonna get down the middle. I knew their safeties were kind of wide, and watching it, three guys collapsed on him pretty quick,” Roethlisberger said. “He’s taking it pretty hard. I pulled him next to my locker and talked to him a little bit there at the end, and just, I got a lot of faith and belief and trust in that guy. He’s got a lot of heart. He’s not one that is lacking for heart and desire. He’ll eat this for awhile. And he shouldn’t, because it’s not on him.”

Pittsburgh went down 29-0 as Minnesota lit up the Steeler defense on the ground, and early on, through the air, as well. As Dalvin Cook amassed the majority of yards in what would be a 200-yard day for him and Justin Jefferson put together much of his seven catch, 79-yard stat line with an early touchdown, Pittsburgh was forced into three consecutive three and outs in the first half, following a missed field goal on the opening drive.

It wasn’t until 2:11 left in the third quarter that Pittsburgh finally crossed the goal line for the first time, on the first of three Roethlisberger touchdowns. The Steelers housed it on four out of five drives beginning with that one, coming all the way back from a blowout loss. Freiermuth, who had two catches and 32 yards in the game, actually caught the final touchdown for the Steelers.

He also earned enough trust from Roethlisberger to be his target on the final play of the game. Only a standout play from one of the top safeties in the game prevented him from potentially bringing in a second touchdown, and giving Pittsburgh a chance to complete a historic comeback.