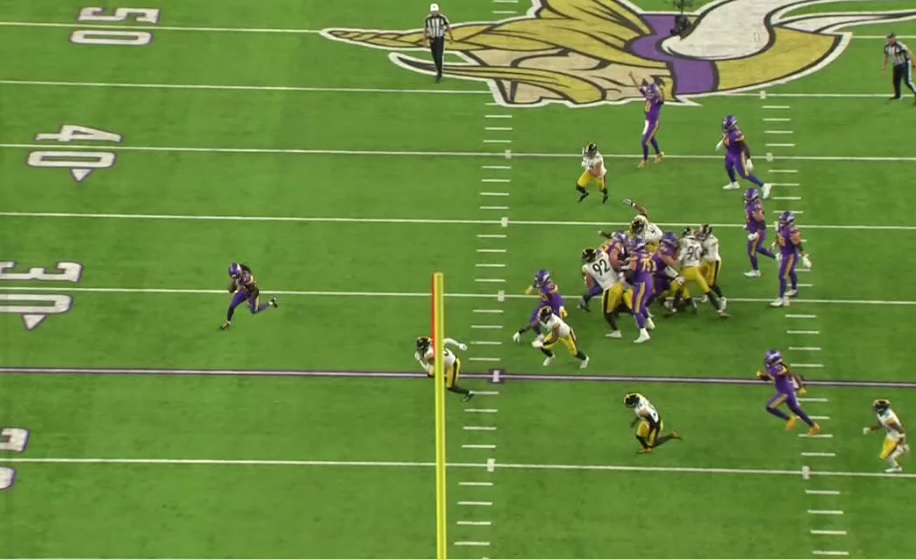 Last week gave Steelers fans a heavy dose of highs and lows. First a game against the Baltimore Ravens. Then taking on the Minnesota Vikings on a short week.

The Steelers started the week on a good note despite a shaky start. The Steelers offense punted away their first three drives before finally scoring three before the end of the first half. Despite only running 19 plays, Pittsburgh trailed Baltimore just 7-3 at the half. Pittsburgh scored 17 fourth quarter points and held on to win 20-19 when the Ravens failed to convert a two-point conversion with 16 seconds left in regulation.

Chris Wormley gained some revenge against his former team by sacking Lamar Jackson 3.5 times. T.J. Watt kept the Steelers in the game with big plays including 3.5 sacks, four tackles for a loss and hitting Jackson six times when he was passing. Minkah Fitzpatrick intercepted a pass in the end zone to end the Ravens opening drive. The offensive line including John Leglue, the fifth left guard for the Steelers this season kept clean pockets for Ben Roethlisberger.

The Steelers beating the Ravens is always a good thing.

The Steelers travelled to Minnesota just a couple of days after beating Baltimore. A dismal start. Pittsburgh’s offense sputtered with Chris Boswell missing his first field goal since week three. He also missed an extra point against Baltimore. Pittsburgh punted on their next five possessions. Then Ben threw an interception on their seventh drive of the game. Meanwhile, the defense gave gobs of rushing yards away to the Vikings who built a 23-0 halftime lead.

Even Moses didn't have it this good. #Steelers pic.twitter.com/KyIT4qe5qu

Minnesota extended their lead to 29-0 by midway through the third quarter. Pittsburgh exploded for 28 points but again the defense gave up a late touchdown. With two seconds left, Ben Roethlisberger’s pass came off the hands of Pat Freiermuth for what could have been a game tying touchdown drive and biggest comeback in NFL history. Alas, it was not to be. Steelers lose to Vikings 36-28.

Man that is a *chefs kiss* beautiful throw from Ben. https://t.co/3GZfJuIG9z

Our hopes rose at the end of the game only for the fickle Steelers crushing them again.

All around a substandard performance despite the impressive comeback attempt. Win or lose the performance looks ugly as the Steelers must constantly play from behind. Normally reliable Chris Boswell missed a field goal in a loss. But also, an extra point in the win. Steelers draft pick Pressley Harvin punting short returnable balls. But the person he replaced, Jordan Berry booming the ball. The defense inexplicably left Minnesota’s main receiving threat on one-on-one coverage and left open gaping holes for Davin Cook exploit. At times it looked like Alabama playing against Slippery Rock. The offensive line exploited by a defense bringing two persons through a single gap. Ben Roethlisberger took a pounding as the Vikings sacked him five times.

Then you have players committing silly personal fouls on the opening drive. Late in the game when precious seconds matter Chase Claypool strikes a pose with the ball as the clock ticks. Veteran player Trai Turner tries to take the ball giving an opportunity for a savvy Vikings player to knock the ball to the ground. Where is the sense of urgency?

An inexperienced offensive line coupled with an inexperienced defensive line due to injuries is a recipe for an inept offense and a defense defending on its heels. Add in injuries to T.J. Watt and Alex Highsmith causing them to miss most of the second half. And it’s a wonder the Steelers got back into this game at all.

Now a final set of games against Tennessee Titans, Kansas City Chiefs, Cleveland Browns and Baltimore Ravens. The outlook for the Steelers playoff chances is not pretty.

YOUR HOT TAKES DURING THE GAMES

TOP COMMENTS FROM THE RAVENS GAME

The game delayed when an NFL official injured on the sideline. This gave the Ravens defense a free timeout during the Steelers comeback. Agustin-Arg observed, “Ref injured: Ravens 3rd round comp pick.”

Coach Teazar observed during the coaches challenge of Ray-Ray McCloud’s would-be reception: “Let’s be honest none of us even know what a catch even is anymore. This could go either way.” The reception call overturned despite Ray-Ray having the ball in grasp the entire time as shown on the replay.

And kudos to the reader that predicted a big play. “TJ strip sack coming.” Greg Payne complimented, “Your crystal ball is working!”

In the first half, Chris92021 lamented “I feel bad for Najee. He doesn’t deserve this. Same for Watt. Like his brother, his prime years are being wasted by bad drafts and a poor coaching staff.” the Steelers down 23-0 halfway through the game.

George Kroger saw something positive. “Best part of this game is the community here at Steelers Depot!”

Hypo Cycloid appreciates the Steelers competitive quarterback. “You know, so many fans can’t stand Ben. But I don’t give a crap. He is a competitor who cares. He never gives up. He is frustrated as heck out there and is getting beat up in his old age, but he is still giving his all.” He and the other players never gave up. They played hard through the final whistle.

Some Steelers fans ready to give up on this season. Fire Matt Canada. Fire Keith Butler. Or fire Mike Tomlin. Who is the Steelers quarterback in 2022? What a waste of talent. What horrible draft selections. Why go to the playoff when they’ll be one and done?

I’m an old school average Steelers fan. Can this team beat the Titans? If they do, what needs to happen to increase chances of a playoff spot? I’ll worry about the other three games after the Steelers deal with Tennessee. And as for firing whomever and who will be on the team in 2022? I’ll worry about that once the Steelers no longer have a chance of winning a championship by qualifying for the playoffs in 2021. But that’s just me. Here we go.

I always like to offer a music selection. Steelers fans have had it all this season. The Steelers need the man with no name to step in wherever needed. Here is the Good, the Bad, and the Ugly.