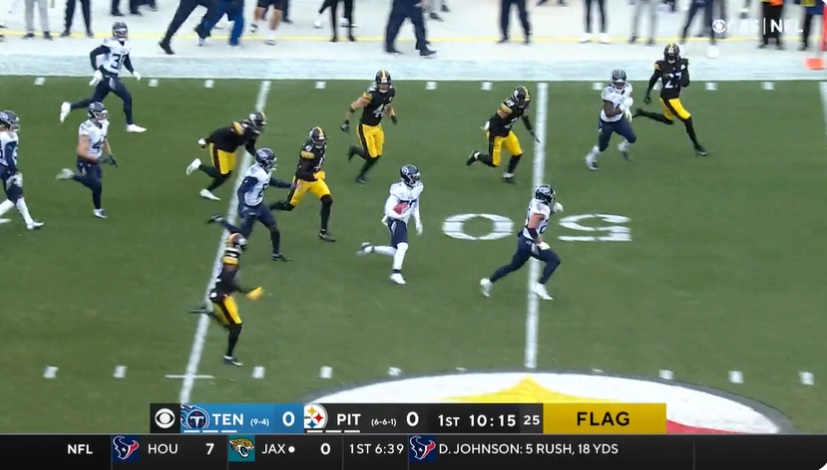 When the Pittsburgh Steelers turn in a strong performance in the tackling department on game day, the black and gold typical tends to pull out a win.

Though the Steelers gained just 168 yards of total offense and failed to take full advantage of four Tennessee Titans’ turnovers on Sunday at Heinz Field, the Steelers were able to pull out a 19-13 win thanks to a picture-perfect tackle by cornerback Joe Haden on a fourth and seven, stopping Nick Westbrook-Ikhine short by a full yard (though the terrible spot by the officials was much closer).

That tackle by Haden, who made his return to the lineup after missing five weeks, summed up the Steelers’ efforts in that department against the Titans as Pittsburgh missed just nine tackles on the day, the first time the defense has been in the single digits since Week 11 on the road against the Los Angeles Chargers.

Obviously the Steelers lost that game late, but that wasn’t the case in Week 15 against the Titans.

Let’s take a look at the Week 15 missed tackles report for the Steelers.

Things started out rather rough for the Steelers in the tackling department overall, but credit to the team for bouncing back from a rough start to clean things up and finish strong.

Just how bad was the start in the tackling department? Three of the nine misses on Sunday came in the first quarter as the Titans jumped out to a 10-0 lead.

It all started poorly on the Steelers’ second punt of the game as long snapper Christian Kuntz recorded the first miss of the game on Chester Rogers’ 55-yard punt return.

That’s a blooper-reel miss right there from Kuntz. He does a great job using the sideline as an extra defender, but he gets crossed up and falls over. I didn’t give Benny Snell Jr. a miss on the play because he was just working off of a block and dove in desperation, nor did I give punter Pressley Harvin III a miss, considering that wasn’t even an attempt — he just slide into the picture and caused teammate Miles Killebrew to pull up, allowing Rogers to cut back.

Thankfully Ulysees Gilbert III was able to get Rogers on the turf at the end of his 55-yard return, saving a touchdown and giving the Steelers some blades of grass to defend. However, there was a preposterous block in the back penalty on James Pierre — who was a defender at that point — on the punt that gave the Titans another 15 yards. NFL officiating is horrible. You can see Pierre’s “penalty” in the clip above.

On the ensuing Titans’ drive, Arthur Maulet and Alex Highsmith — both of whom had strong games — recorded missed tackles on a short dump off on third down to Titans’ running back Jeremy McNichols, setting up Ryan Tannehill’s 1-yard QB sneak for a score.

That simply can’t happen in any instance.

Finally, on the Titans’ last drive of the game, I charted a miss for both Minkah Fitzpatrick and Cameron Sutton on D’Onta Foreman’s first run of the drive, which chewed up 20 yards.

It’s not as bad as it looks, but it’s still a bad rep by both. Sutton is slow to close down on Foreman and has a weak tackle attempt, while Fitzpatrick does a great job closing downhill — something he did all game long.

However, Fitzpatrick can’t get Foreman on the ground on the initial high tackle attempt, allowing Foreman to bounce off of him and keep running. Sutton is a passenger along for the ride and if Fitzpatrick wasn’t able to recover and get Foreman’s ankles from behind, there’s not a chance Sutton is getting him on the ground, that’s why I gave him the miss.

Offensively, though the Steelers did pretty much nothing with the football, they were outstanding forcing missed tackles, which is remarkable.

On the day, the Steelers forced 17 Titans missed tackles, winning the tackle battle with a mark of +8.

Even when he’s under siege as soon as he touches the football, Najee Harris remains a special player overall, especially when it comes to forcing defenders to miss.

He often has absolutely no chance in making a play overall, but darn it he fights his tail off.

On the second play from scrimmage Sunday the Steelers tried to establish a running game. That went nowhere fast, but Harris fought hard to make something out of nothing, forcing two missed tackles right away on his first touch.

How he stayed on his feet here until the end of the run is remarkable. He’s incredibly strong and creates a ton after contact. Just fix this offensive line in front of him, and fast, please.

Later in the first half Harris again gave a valiant effort on a play that was a terrible design and gave him no shot at succeeding.

Third and long, throw a check down behind the sticks to Harris and hope he can make something happen. Where have we seen that clip before? Credit to Harris though as he forced three Titans to miss even though he knew as soon as he caught the football that there was no chance he was picking up the six necessary yards.

Gentry showed off power on this 18-yard tight end screen, running through two Titans’ defenders, sending a message to his own sideline in the process. That play ended up being a catalyst to the Steelers’ lone touchdown of the game — a 1-yard Ben Roethlisberger quarterback sneak that sparked the Steelers onto the comeback trail.