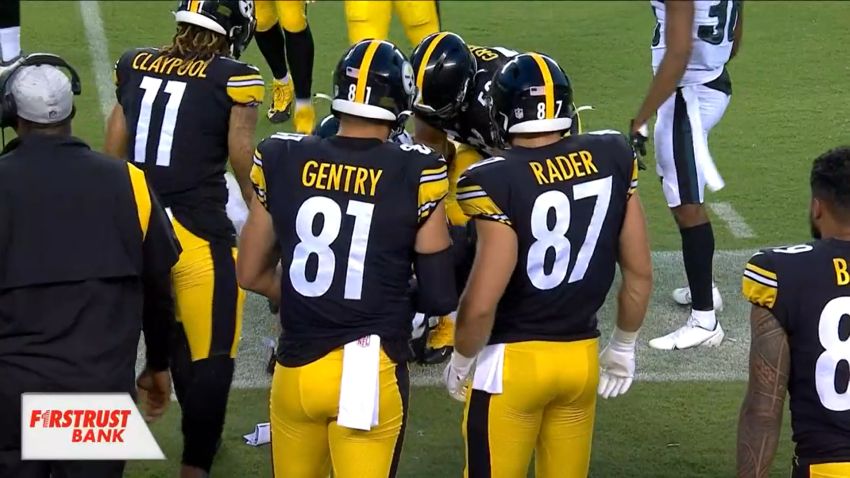 Pittsburgh Steelers starting tight end Pat Freiermuth is currently in the concussion protocol after exiting Sunday’s game for examination. If he indeed sustained a concussion, it would be the second he has suffered during his rookie season, in a relatively short period of time, and it would call into question whether or not he will be available for the team’s next game against the Kansas City Chiefs.

With Eric Ebron already on the Reserve/Injured List, the tight end role would fall upon the shoulders of third-year Zach Gentry, who up until this season has hardly played. This year, he has become a blocker first and foremost, though he now has 10 receptions for 97 yards, and he was known more as a receiver than a blocker, as a former quarterback, coming out of Michigan.

Of course, you need more than one tight end, and Kevin Rader would be the number two guy in the absences of Ebron and Freiermuth. He has spent the past couple of years on the practice squad, but was called up after Ebron’s injury, though he does not always dress.

“Kevin’s a guy that’s been just kind of waiting his turn for a long time, and he’s been consistent and he’s physical and he knows what to do”, said Gentry, who has been with him the past three years, battling with him for the number three tight end role. “He knows the offense very well, so I think he’ll perform very well”.

The team also has Jace Sternberger on the practice squad, first signed just a little under a month ago when Rader was promoted to the 53-man roster. Originally drafted in the third round in 2019 by the Green Bay Packers, he has logged 18 games in his career, catching 12 passes for 114 yards and one touchdown, all of that coming last season.

“Jace, obviously he’s only been here for a little bit, but he’s a very good tight end”, Gentry said. “If he gets an opportunity, I’m sure he’s gonna do great things with it. I don’t think we’re worried at all about having very much fall-off bringing those guys up. I think they’ll do just fine”.

Sternberger spent the start of the 2021 season on the suspended list, and the Packers let him go when he came back. He spent about a month with the Washington Football Team, but did not dress for a game before being waived. He signed to the Steelers’ practice squad on November 23.

As for Gentry, he has logged 339 snaps on offense across 14 games for the Steelers this season, after logging just 69 snaps in six games played over the past two years combined. He did suffer a season-ending injury late in the season last year, which cost him a bit of playing time he otherwise would have had. But this is the first time that he has regularly dressed and contributed and had a role on offense. A starting role, of course, would be entirely new at this level.