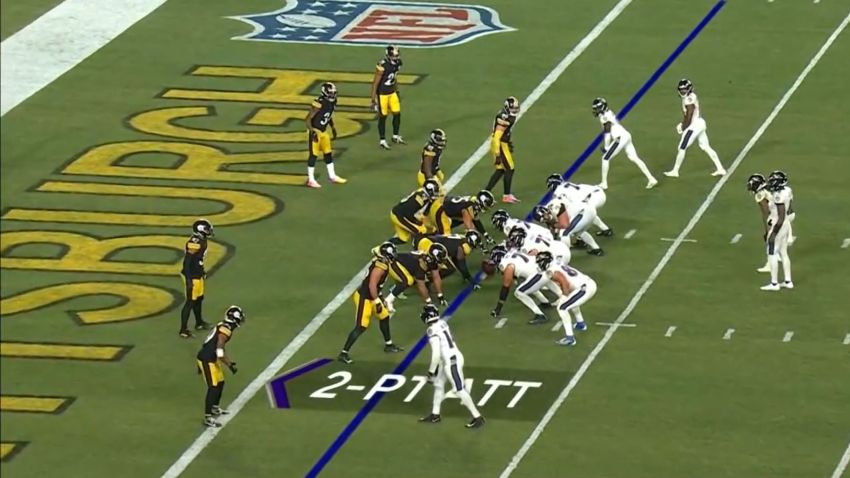 The Baltimore Ravens pushed all their chips to the center of the table with just 12 seconds to go in Sunday’s game against the Pittsburgh Steelers when head coach John Harbaugh elected to go for two, down by one point, following a late touchdown. He explained after the game that they “were pretty much out of corners at that point in time” as among the factors behind the decision not to play for overtime.

The play ended up just an inch or two off, with pressure by T.J. Watt causing quarterback Lamar Jackson to put a pass out into the flat just too wide for tight end Mark Andrews. He likely gets across the goal line, perhaps even untouched, had the pass connected.

Should that play even have counted, however? Harbaugh was asked yesterday if he had heard from the league about the play. Evidently, the Steelers were offside. Yet the Ravens got away being offside on a play earlier in the game themselves.

“No, I didn’t hear anything afterwards”, Harbaugh said about the two-point play and its officiating. “I haven’t heard anything from the league. “When a guy is lined up that far – I saw the picture – that far in the neutral zone, you’d certainly expect that to get called, though”.

And indeed, if you go back and look at the broadcast, it does appear that defensive tackle Montravius Adams had his hand down beyond the point of the football. We strive for objectivity here as much as possible, and it’s indisputable that Adams hand is across the two-yard line. It’s about in-line with the far point of the football.

“A player is Offside when any part of his body or his person is in the Neutral Zone”, the official rulebook reads. The neutral zone is defined as “the space between the forward and backward points of the ball (planes) and extends to the sidelines”. Adams was, indeed, offside on the play.

But things like that happen over the course of a game. We certainly know that false starts can get missed routinely. Chalk it up to human variability, both on the part of the players and of the officiating staff.

To his credit, Harbaugh did not stress the point, nor did he use it as an excuse. He was simply asked a question—that question being if it looked like the Steelers were offside, and if they’d heard anything from the league or the officials about it afterward—and gave an honest and fair answer before moving on.

Let’s put the shoe on the other foot for a moment. If the Steelers went for a two-point conversion to win the game but did not execute, yet the Ravens were offside on the play, in a way that did not affect the outcome of the play itself, how would you feel as a fan about the fact that the penalty wasn’t called, nor addressed afterward? That’s not a loaded question, I just want to hear some answers.