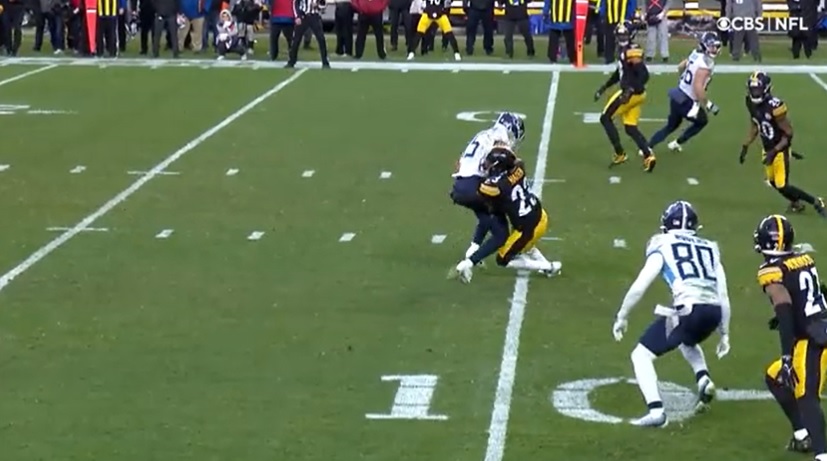 A second-half shutout by the Pittsburgh Steelers defense carried the team to a 19-13 victory over the Tennessee Titans on Sunday afternoon at Heinz Field.

The Steelers opened the game with a 16-yard completion to WR Diontae Johnson, but a two-yard carry by RB Najee Harris and an incompletion by QB Ben Roethlisberger forced the Steelers into a third-and-eight. Roethlisberger was incomplete to WR Chase Claypool, and P Pressley Harvin III came out to punt. His punt was way short, going just 27 yards and Tennessee took over at their own 30-yard line. Pittsburgh forced a Tennessee three-and-out, as DE Chris Wormley sacked QB Ryan Tannehill on first down and the Titans couldn’t recover from the eight-yard loss.

P Brett Kern’s 50 yard punt was returned 17 yards by WR Ray-Ray McCloud, who brought it to the Pittsburgh 35, which is where the Steelers would start their second drive. Roethlisberger’s first pass of the drive was batted down and his second was incomplete to WR James Washington. WR Diontae Johnson was short of the sticks on third down, and Harvin III came out for his second punt of the day. His second punt was much better than his first, travelling 51 yards to the Tennessee 10, but WR Chester Rogers returned the punt 55 yards to the Pittsburgh 35 and an additional 10 yards was tacked on due to a block in the back penalty against CB James Pierre.

The Titans picked up a first down on a 5-yard reception by RB Dontrell Hilliard following a six-yard carry by RB D’Onta Foreman. On third-and-eight, Tannehill found RB Jeremy McNichols short of the first down but a missed tackle by CB Arthur Maulet allowed McNichols to gain 11 and give the Titans first-and-goal inside the Pittsburgh 1. Tannehill scored on a QB sneak on the next play, and K Randy Bullock’s extra point gave the Titans a 7-0 lead with 7:41 left in the first quarter.

Pittsburgh once again went three-and-out after Harris was stuffed for no gain on first down, Roethlisberger was sacked on second down and was incomplete on a screen pass to Harris on third down. Harvin III’s third punt was terrible, going just 32 yards out of bounds to the Tennessee 47.

The Steelers drove to their own 47, but a false start against G Trai Turner made a third-and-one a third-and-six and Pittsburgh failed to pick up the first down. Harvin III’s punt was fair caught and the Tennessee 15, and the Titans started their fourth drive of the game with a two-yard carry by Foreman. On third down, the Titans looked like they had a first down on a reception by TE Anthony Firkser, but Maulet forced a fumble and it was recovered by S Minkah Fitzpatrick and the Steelers took over at the Tennessee 36. It was Pittsburgh’s fifth straight game with a takeaway. On third-and-four from the Tennessee 18, Roethlisberger was incomplete down the right sideline to McCloud, but K Chris Boswell hit a 36-yard field goal and the Steelers cut the Titans lead to one score at 10-3 with 10:35 left in the first half.

Tennessee picked up a first down on third-and-four on a five-yard reception by WR Cody Hollister, and on second-and-ten Foreman gained 18 yards on a reception and the Titans moved into Pittsburgh territory. Multiple first downs by Tennessee on short passes and runs set them up inside the Pittsburgh 5, but Tannehill was sacked on third-and-goal and the Titans settled for a Bullock field goal. Tennessee took a 13-3 lead with 18 seconds left in the half. The Titans scoring drive lasted 19 plays and took 10:17 off the clock.

Pittsburgh forced a Tennessee punt from their own 49 during the Titans opening drive of the second half, and McCloud returned it to the Pittsburgh 23. The Steelers went three-and-out, and Chester Rogers fumbled the punt return on a nice hit by Pierre but he recovered. The Titans took over at their own 20, leading 13-3. A third-and-13 sack by OLB T.J. Watt gave him the Steelers single season sack record and also forced a Titans punt. With the ball back, the Steelers picked up a first down on a five-yard reception to Freiermuth, but he was injured on the play. On the next play, TE Zach Gentry gained 18 yards on a reception and then RB Najee Harris gained six on a carry to give Pittsburgh second-and-four at the Tennessee 10. Pass interference against Tennessee on a pass to WR Chase Claypool in the endzone set Pittsburgh up with a first-and-goal at the one-yard line. A run by Harris and a sneak by Roethlisberger left the Steelers with third down, but on third down Roethlisberger’s QB sneak crossed the goal line and the Steelers cut their deficit to three at 13-10 after Boswell’s extra point with 3:08 to go in the third quarter.

The Titans faced a third-and-six on their own 42, and Tannehill threw it short to TE Racey McMath. He was brought down by CB Cam Sutton, and McMath fumbled and the ball popped into the hands of CB Joe Haden. The Steelers took over in plus field position at the Titans’ 41-yard line. On second-and-eight, Roethlisberger was complete to Washington for a 12-yard gain and a first down, and the third quarter ended. On second-and-ten, Roethlisberger found Washington but he fumbled and Tennessee recovered. However, a roughing the passer call against the Titans gave the Steelers the ball back and 15 additional yards. Pittsburgh couldn’t take the lead with a touchdown though, as Boswell tied the game up at 13-13 with a 28-yard field goal with 13:24 left to play.

The Titans got a big conversion on third-and-11 as Tannehill hit Rogers over the middle for 12 yards as the Titans moved to the Pittsburgh 49. After two carries by Foreman gained a total of seven yards, Tannehill was forced to throw on third-and-three, and his pass was tipped by OLB Taco Charlton into the hands of LB Joe Schobert. Schobert returned the interception 24 yards to the Tennessee 31.

The Steelers again couldn’t take advantage of the short field with a touchdown, going three-and-out. However, the Steelers took their first lead of the game on a 46-yard field goal by Boswell and Pittsburgh took a 16-13 lead with 7:20 left in the fourth quarter. After a first down scramble by Tannehill, he fumbled the snap on second down and the Steelers recovered at the Tennessee 35, the fourth turnover by the Titans on the day. Again though, the Steelers failed to score a touchdown and it was up to Boswell to extend their lead to six points. He was good from 48 yards out, and the Steelers took a 19-13 lead with 4:29 left.

Foreman gained a combined 33 yards on his first three carries of the Titans’ next drive, but on the third he went down with an injury. Jeremy McNichols came in and picked up three yards and then just one yard, which led to a pivotal third-and-six from the Pittsburgh 38. A five-yard reception by Hilliard set up fourth-and-one from the Pittsburgh 33. Foreman came back in for the fourth down play, and he just barely gained the yardage necessary for the first down right before the two-minute warning.

Tennessee got inside the 20 on a Tannehill scramble which also gave the Titans a first down. On second-and-six, OLB Derrek Tuszka forced a fumble but it was recovered by Tennessee. Tuszka was held on the play, but the Steelers declined the penalty to set up third-and-14. The Titans pass on third-and-14 was caught by Rogers for a gain of eight, and on fourth-and-six pass was caught by Westbrook-Ikhine and he was ruled short of the first down after a great tackle by Haden. The Steelers walked away with a 19-13 win and moved to 7-6-1 on the season.

Pittsburgh faces another test next week when they travel to Arrowhead Stadium to take on the Kansas City Chiefs at 4:25 p.m.