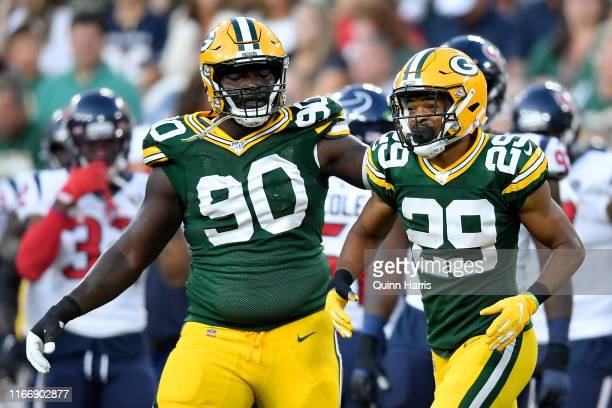 The Pittsburgh Steelers announced Tuesday that they signed DL Montravius Adams to their 53-man roster from the New Orleans Saints’ practice squad. Adams is a former third-round pick by the Green Bay Packers back in 2017. Prior to this season, Adams spent his first four years with Green Bay, playing in 45 games and starting three of them.

He then signed with the New England Patriots this offseason, but failed to make it past the final roster cuts, getting released before the start of the regular season. Adams then signed with the Saints and has played in five games for New Orleans, including one start. He would later be released and re-signed to their practice squad after his brief appearance on the 53.

Thus far in his NFL career, Adams has accumulated 51 total stops (23 solo), five TFLs, six QB hits, 1.5 sacks, four PBUs, a forced fumble and a fumble recovery. While Adams’ sack production doesn’t stand out and he has served as mainly a rotational player, he does show some good traits as a defensive lineman in the trenches when you pop in the tape.

More specifically, his run defense sticks out for his ability to hold the point of attack as well as effectively stack and shed blocks to make plays. Here is a clip from last season versus the Buccaneers where Adams plays with good leverage on the RG and rips through the block to wrap up #25 LeSean McCoy in the backfield.

Here is another play in the same game where Adams fights pressure laterally on the draw play, keeping his hips and shoulders square to the LOS as he works across the face of LG #74 Ali Marpet as he sheds off the block to make a play on #27 Ronald Jones for a minimal gain.

Here is a great example of Adams’ ability to use his hands against the run against the Saints last season, where he engages the RG on the snap, but gets a good rip off the block, throwing the lineman to the ground as he wraps up #41 Alvin Kamara for the nice run stop for minimal yardage.

Now Adams isn’t perfect in run defense as you would expect from most defensive linemen that spend a majority of their careers as more rotational guys. Here on this rep against #73 Jonah Jackson of the Lions last season, Adams does a great job engaging the block and fighting pressure laterally to the sideline, but he fails to get his head on the outside shoulder of Jackson fast enough to keep contain and get off the block, with #28 Adrian Peterson getting to the corner for the big run up the sideline.

While Adams shouldn’t be considered the savior for the Steelers’ run defense upfront, he does provide the one thing you love to see for a defender in the trenches: Effort. Check out these two clips versus the Chicago Bears where Adams gets off his block and runs down the ballcarrier either across the field or down the field in the secondary, showing great pursuit for a guy standing 6’3″, 304 lbs. He has sneaky athleticism for his size, and combine his hand usage with his effort to play chase and get off blocks, and you have a more than capable reserve defensive lineman.

This film room isn’t to say that Pittsburgh should look to plug in Montravius Adams as the immediate starter at nose tackle over Isaiah Buggs or Carlos Davis if he comes back from injury this week, but rather that Adams fits the description HC Mike Tomlin gave in his press conference, saying that Pittsburgh would be open to schematic changes as well as personnel changes up front, hoping that big changes can be made with subtle changes in-house rather than making drastic changes. Poaching Adams off the Saints’ practice squad would qualify as a subtle change, adding another young player who has proven capable of providing quality play against the run if called upon.

Tomlin acknowledged that Adams has a few more hurdles to clear before being cleared to play Sunday against the Ravens, due to learning the defensive playbook and adjusting to the defense in practice. However, it can be seen on film that Adams plays with the effort needed to stop the run. Tomlin what fixes run defense? “Effort. Man vs. himself battle.”

What are your thoughts on the addition of Montravius Adams? Do you think that he will be able to help Pittsburgh upfront against the run? Do you think he’s just another guy that won’t see the field or will make little-to-no-impact this season? Please leave your thoughts in the comments section below and thanks again for reading!