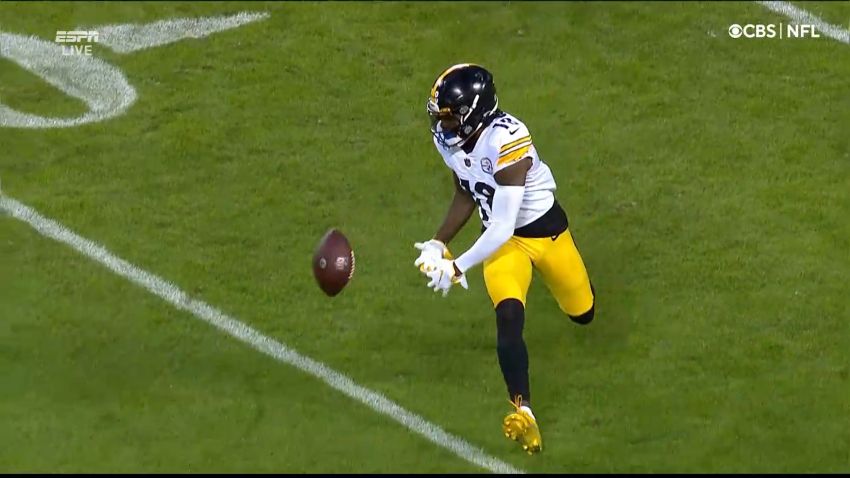 Diontae Johnson’s 2021 season hasn’t been perfect, but up until lately, it had been a far cry from his mistake-prone sophomore campaign from a year ago, which saw him lead the NFL in dropped passes while also fumbling twice.

In recent weeks, however, he appears to be playing catchup, dropping a couple more passes after having only one or two in the first few months of the year. Worse, he put the ball on the ground with a non-contact fumble as he tried to switch hands after the catch.

“After the play, you’ve just got to move on. Try not to think about it as much”, he told reporters yesterday in speaking about his bewildering third-quarter fumble. “Yeah, it sucks in the moment that you fumbled the ball, but there ain’t much you could really do about it but bounce back and try to make another play for the team”.

The turnover occurred in the early portions of the first half, the Steelers already trailing 23-0 at that point. The defense was able to force the Kansas City Chiefs to go three and out on their opening drive, Pittsburgh taking over at their own 30. On 2nd and 8 is when Johnson’s fumble happened, after picking up the first down with some room to run.

“That’s all I was trying to do, is make a play, at the end of the day”, he said in explaining the play. “It hit my leg and I fumbled. I can’t do nothing about it but move on and keep trying to put points on the board and just help the team out”.

It was Johnson’s second fumble of the season, the first coming back in Week 10 in overtime against the Detroit Lions. That was a huge play coming off of a 36-yard catch-and-run, only to have Lions cornerback Mark Gilbert strip the ball out from him from behind. They would end up tied in that game.

That wasn’t Johnson’s only blemish in Sunday’s game against the Chiefs, but the important thing is that he was able to eventually compartmentalize it and move on. He capped off the game with a nifty 15-yard touchdown, even though it was far too little, far too late at that point.

He finished the game with six receptions for 51 yards and a touchdown, now giving him 92 receptions on the season for 1,079 yards and seven touchdowns, all career-highs, or in the case of the latter, tied for his career best.

With two games left to play, he has an excellent chance of hitting the 100-receptions mark, which would make him just the fourth player in Steelers history to do so, joining Hines Ward, Antonio Brown, and JuJu Smith-Schuster. Only Brown has done it more than once.