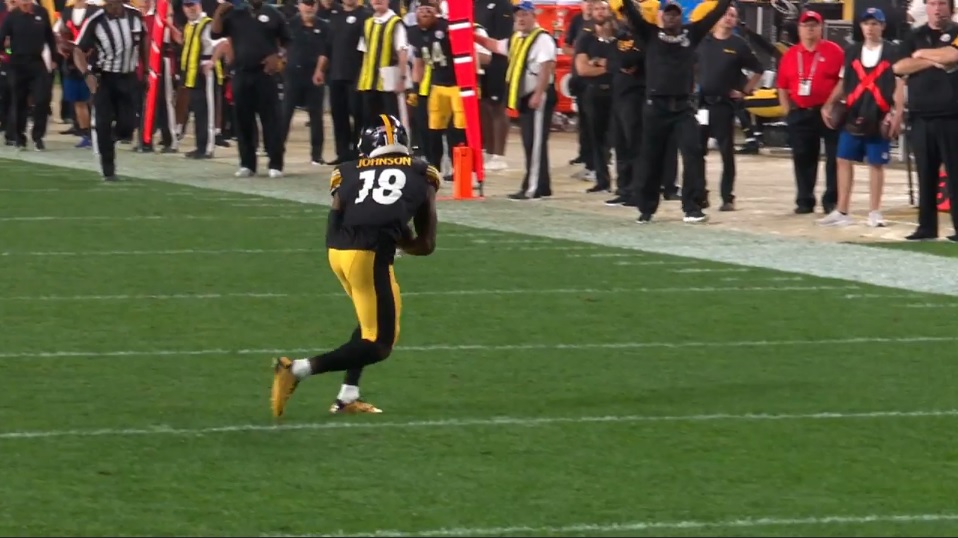 The strides Pittsburgh Steelers’ wide receiver Diontae Johnson has made this season as a complete receiver has been nothing short of remarkable.

Coming off of a rough 2020 season that saw him benched for a stretch due to drop issues, Johnson hit the offseason hard, working on his craft to become a better player.

So far, he’s done just that, turning into a true No. 1 for the Steelers while starting to make a real name for himself across the league.

Now, ahead of the Week 13 matchup with the AFC North rival Baltimore Ravens, Johnson is poised for his toughest test yet: Ravens’ All-Pro cornerback Marlon Humphrey.

Humphrey is expected to travel with Johnson throughout Sunday’s game, something Humphrey has done in the past with Steelers’ wide receiver JuJu Smith-Schuster in the slot.

Johnson is unfazed by the possibility of the All-Pro shadowing him on Sunday, stating he believes it’s a sign of respect.

“Yeah. I mean, he’s there pretty much their best corner, obviously,” Johnson said to the media Thursday, according to video via Steelers.com. “They paid him and whatnot; great player. Can’t take nothing from him, but if he follows me…going to do what it do; gonna have to play the game out. It’s going to be a competitive matchup, so I’m ready regardless.”

This may be the first time in his young career that Johnson will be shadowed throughout a game. Asked if that has ever happened to him before, Johnson was unsure, stating he doesn’t pay attention to that type of stuff.

“I don’t really pay attention to that, to be honest,” Johnson said. “I just go out there and play and I just make my plays…it’s a sign of respect, so it shows you how they feel about you. But at the end of the day, I’m not worried about that. Like I said, I’m just go out there and make plays and do what I do best try to help the team win.”

Humphrey has typically shut down the Steelers’ receivers in the past, including forcing a key fumble on Smith-Schuster late in a 2019 Steelers’ loss at Heinz Field to the Ravens.

JuJu on fumble: “I feel terrible man. It’s literally the worst feeling ever. Knowing the game’s on the line, you have the ball. Marlon Humphrey, that’s what he does. He made a great play.” #Steelers

How well Johnson fares in his matchup against Humphrey on Sunday could go a long way for the Steelers’ success on offense against an average Ravens defense that loves to blitz under defensive coordinator Wink Martindale.