Today I wanted to look at how defenses across the NFL have fared against rushing attacks, with different views including success rates, context through various data, along with individual player data for the Steelers. 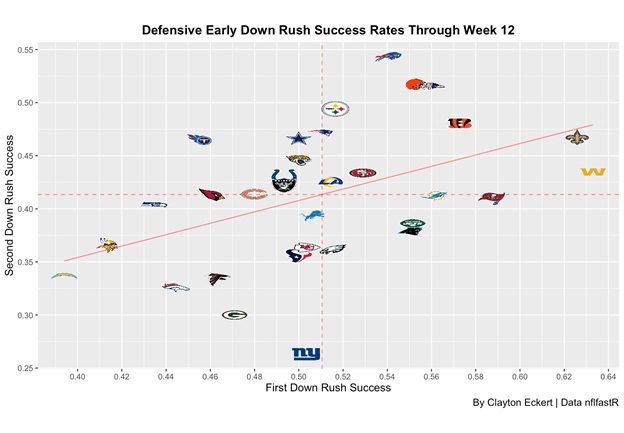 Interesting results from the graph, after seeing many top run defenses at the top and right of the graph, we see Pittsburgh with positive results, as well. On first down, the Steelers have a 51.7 success rate, which ranks 12th and is just above the mean in the NFL. Their second down success rate is an impressive 49.4%, which ranks fourth league-wide! Not what I was expecting with the recent woes etched in memory, so let’s keep diving in to get more answers. Here are late down success rates, where third and fourth down runs that do not pick up the first down are considered a success: 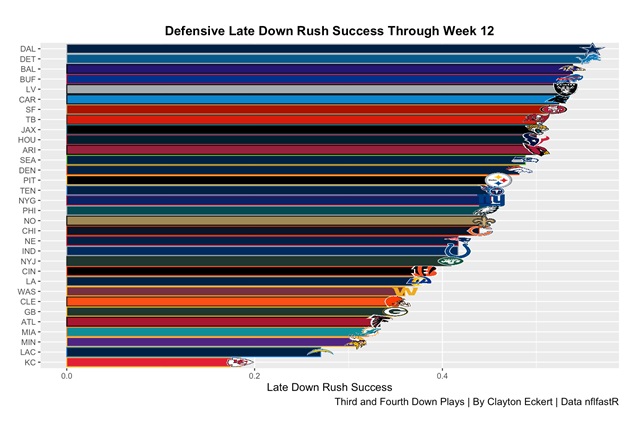 The Steelers rank 14th at a 45.9 success rate, their lowest percentage from a down perspective. This highlights the Steelers defense allowing opposing offenses to sustain drives at a less than ideal rate. Now let’s sum it up and look at the total success rates: 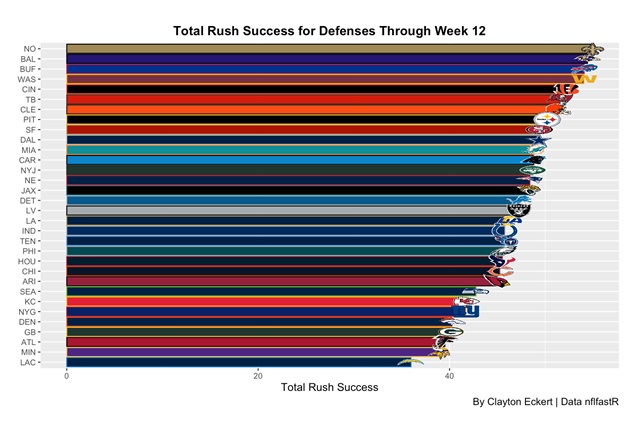 From a success rate perspective, the Pittsburgh’s run defense has fared well compared to the league with a 50% success rate that ranks eighth! So, half of the time the Steelers are stopping their opponent successfully! Of course this does not tell the full picture, so let’s add more context by week: 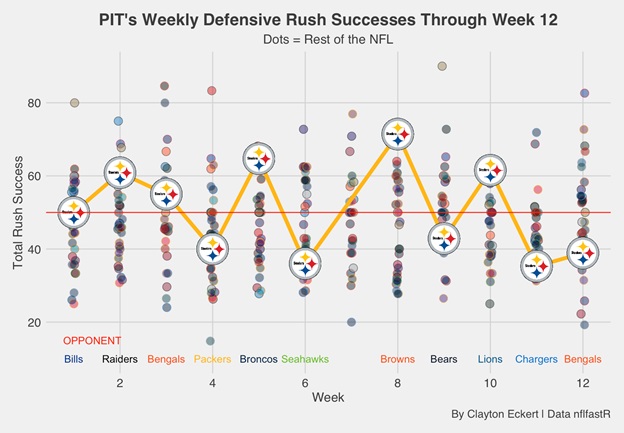 With this view, we can see how the run defense has fared against particular opponents. The Steelers struggled against the Packers, Seahawks, and more recently the Chargers and Bengals the most, and surprisingly had their best result against the Browns. Now let’s look at a similar view with expected points added (EPA) by week: 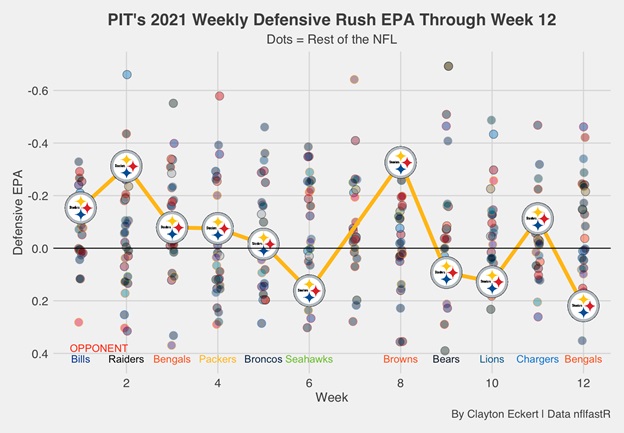 Here we can see the Seahawks, Bears, Lions, and Bengals games were the worst games for defensive EPA, with the latter being the worst mark. Pittsburgh also had their best result against the Browns in this data point, obviously one of the more respected rushing attacks in the NFL.

Now for the context focusing more on the struggles for Pittsburgh’s run defense, what are teams’ success rates against scrambles only? 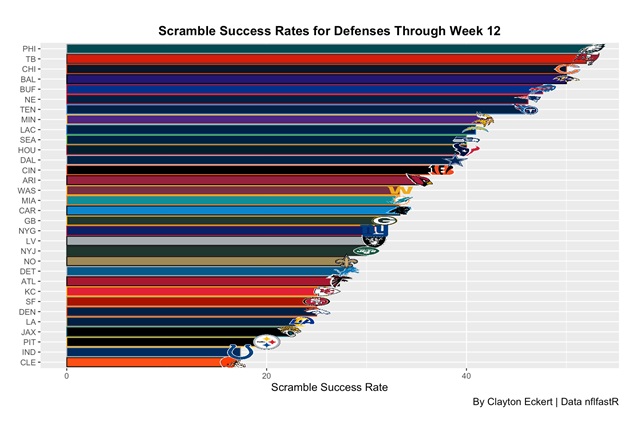 Another crucial struggle for Pittsburgh’s run defense is when they are not stopping the opposition successfully, they are allowing too many explosive rush plays as well: 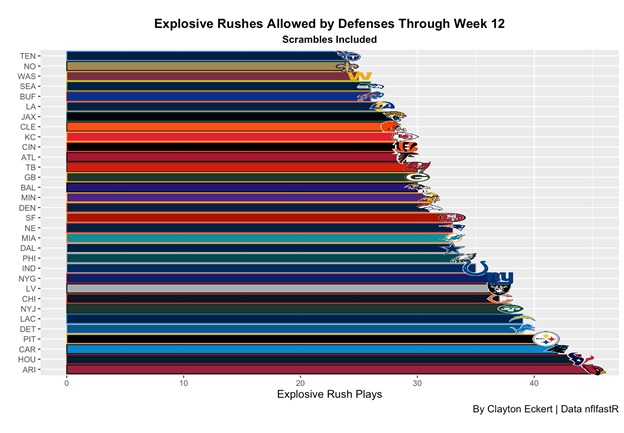 As we can see, Pittsburgh is allowing explosive runs and scrambles at one of the highest rates in the league, giving more context to the seemingly good success rates from earlier. This has been a boom or bust Steelers run defense, getting a stop or allowing an explosive play. On top of that, since Week 6, the run defense has allowed at least one rushing touchdown in every game, and in the last three games had at least two, with the Bengals getting three touchdowns (including a touchdown scramble) in Week 12!

Next let’s look at a broader totality view with rush yards per game and expected points contributed from Pro Football Reference: 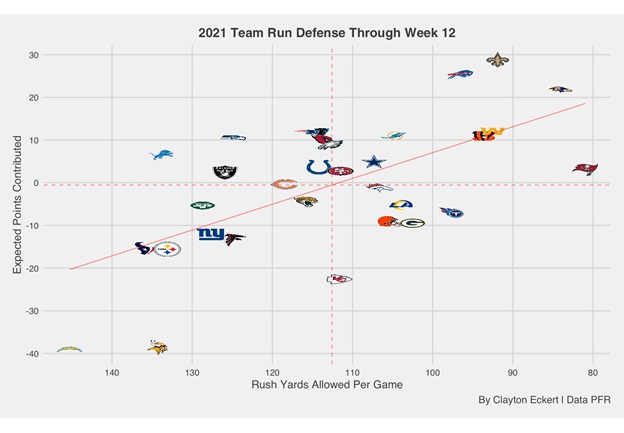 Pittsburgh lands at the bottom left of this graph ranking fifth-worst in yards per game at 133.1, and also ranks 29th in the league with the expected points contributed data point. This highlights the overall issues the Steelers have had, especially in the broad total yards view here. 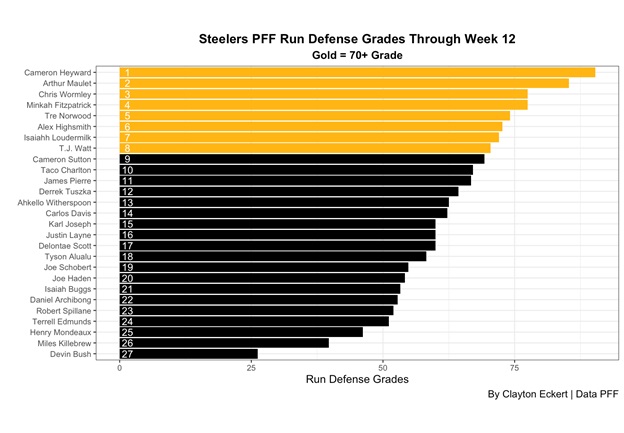 Defensive lineman Cameron Heyward tops the ranks with a 90.3 grade, and cornerback Arthur Maulet also has an impressive 85.3 grade. The rest of the gold bars highlight only eight total players with 70+ grades! Players who have struggled the most according to the grades are defensive lineman Henry Mondeaux, safety Miles Killebrew, and particularly linebacker Devin Bush with a 26.2 grade!

If the Pittsburgh defense has any hope of turning things around on run defense, the focus should be on limiting the explosive runs and scrambles. Do you think the Steelers defense can step up individually and collectively to improve on these issues? One thing’s for sure, they’d better, or we are all in for a rough ending to the season.