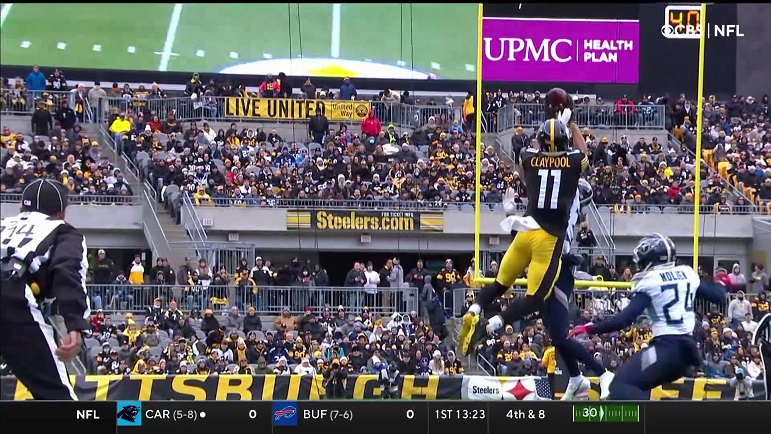 There’s a growing narrative this week surrounding Pittsburgh Steelers wide receiver Chase Claypool. In short, it’s been speculated by a few media members these past few days that Claypool was being disciplined in some sort of way in the second half of the team’s Sunday home game against the Tennessee Titans.

Let’s give the credit here where the credit is due. Here is what Gerry Dulac of the Pittsburgh Post-Gazette wrote on Wednesday.

“According to a team source, Claypool appeared to get into an argument with one of the assistant coaches on the sideline that could have led to him remaining on the bench in the fourth quarter,” Dulac reported.

Notice how Dulac crafted his sentence as it includes “appeared” and “could have”. Don’t you just get a kick out of that?

Let’s give more credit, shall we? Mark Kaboly of The Athletic reported on Twitter a few days ago that Claypool did not play any snaps in the fourth quarter against the Titans. Claypool, however, did indeed play three snaps in the fourth quarter of the game against the Titans. Such great reporting by Kaboly, right? Makes you wonder if he even re-watches these games. I’m guessing he doesn’t. I’m guessing Dulac doesn’t, either.

The last snap Chase Claypool took against the Titans was with 3:08 left in the third quarter. However, the Steelers only ran 13 plays the rest of the game, but it was Washington instead of Claypool in the game.

Below is a look at our play-by-play charting from the game against the Titans, and as you can see, Claypool played all three snaps of the tenth offensive possession that started at 9:16 of the fourth quarter. By the way, Claypool played 13 of the 16 third quarter snaps in that game. Claypool also played all but six of the first half snaps in the game.

During his weekly Thursday press conference, Steelers offensive coordinator Matt Canada was asked about Claypool not playing a lot of snaps in the fourth quarter of Sunday’s game.

“I think we were trying to get all the guys involved at certain times,” Canada said. “It was just kind of a rotation that we had going at that spot. It kind of worked out that way for certain drives. Nothing more specific than that.”

That certainly does make sense, even though it doesn’t fit the growing narrative.

Late during his Thursday press conference, Canada was asked if it speaks any to the development of Claypool that fellow wide receiver Ray-Ray McCloud is playing more than him at this point.

“Chase is a tremendously talented player who we have a lot of belief and faith in and have no doubts will make a lot of plays for us,” Canada said. “We will all continue to keep trying to get better. That will hopefully show up really soon for all of us, not just him.”

Claypool certainly didn’t have a great game on Sunday, as he failed to catch any of the three passes thrown his way. One of those was a brutal drop on a wide receiver screen early in the second half.

Did indeed Claypool have some sort of heated discussion with someone on the sideline on Sunday that led to him only playing three fourth quarter snaps? It’s hard to say for sure, but it certainly seems like Claypool was just part of a rotation in the fourth quarter to get fellow wide receiver James Washington some snaps.

Man, it really seems like the media is really lacking effort in their reporting more and more these days. Sure, Claypool has had a rough couple of weeks, and really a rough season so far, but at this point it feels like he’s an easy target to pile on top of.

A lot of misinformation out there on Chase Claypool and his fourth quarter playing time against the Titans. here is a look by play of when Claypool was on the field, per our charting by @THMead3 #Steelers pic.twitter.com/TjYphLARaM