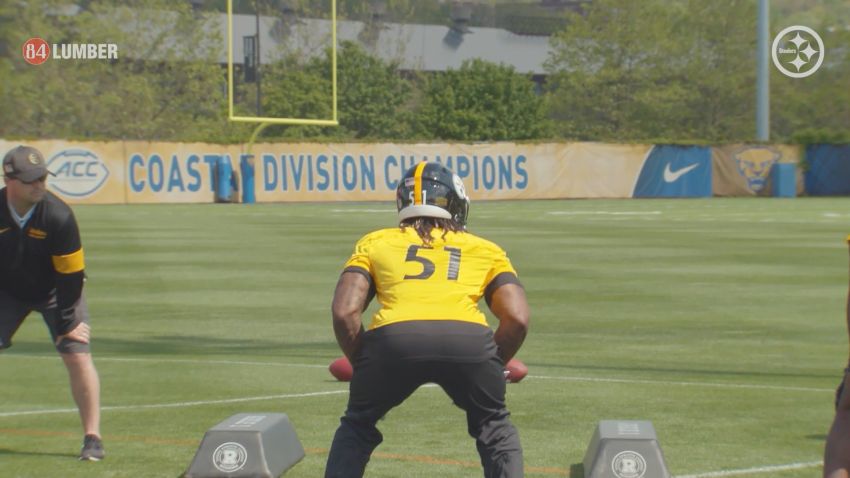 Pittsburgh Steelers rookie inside linebacker Buddy Johnson was the last player of the draft class who made the team to make his debut on his intended unit, logging his first defensive snaps of the season on Thursday last week against the Minnesota Vikings—all of six plays.

Head coach Mike Tomlin very much left the door open for him to see more playing time going forward as they search for answers not just at his position, but throughout the defense, and in the trenches on offense, as well. The first step, of course, is knowing what you’re doing, and he believes he has that down—for the most part.

“I know the defense pretty well. I think the guys upstairs and my peers, my teammates, they do a great job explaining it to me”, he told reporters earlier today. “Even when I’m kind of confused, they do a great job explaining why I’m doing what I’m doing. I like to know the moving parts around me because it makes my job easier. Once I start to learn that outside-in, that’s when I’ll become comfortable”.

Johnson logged all of six snaps in the Steelers’ last game, spanning the end of the third quarter and into the fourth, playing six out of seven snaps, all in base, the lone snap for which he was not on the field being a dime package with Marcus Allen as the lone linebacker.

During the six snaps in which he played, he split time evenly between Devin Bush and Joe Schobert as the other linebacker with whom he was paired. It seems as though the coaches stopped playing him, however, once the Steelers were starting to get back into the game and it looked like they might actually have a shot at pulling out the comeback.

It is interesting to hear Johnson’s comments about wanting to understand the defense as a whole, though that is more common for the inside linebacker position than most. It’s a similar mindset that Cameron Sutton brought with him as a rookie, and which has served him well.

The future of the position in this defense is unclear. Both Bush and Schobert are under contract for next season, but Schobert is not guaranteed to be retained after being acquired via trade for a sixth-round pick. Due to the inherited contract, they would not have any dead money if they release him.

As for Bush, anybody who’s been following the team this year knows the score. He has struggled significantly, and it’s a foregone conclusion that they won’t be picking up his option. He may have to earn his roster spot, let alone a starting job.

Johnson, a fourth-round pick, no doubt wants to get some snaps on film to give the coaches something to evaluate heading into the offseason as they consider what to do at inside linebacker. They haven’t been bashful about playing other rookies this year. Still, with the return of Robert Spillane looming, it won’t be easy for him to get on the field.