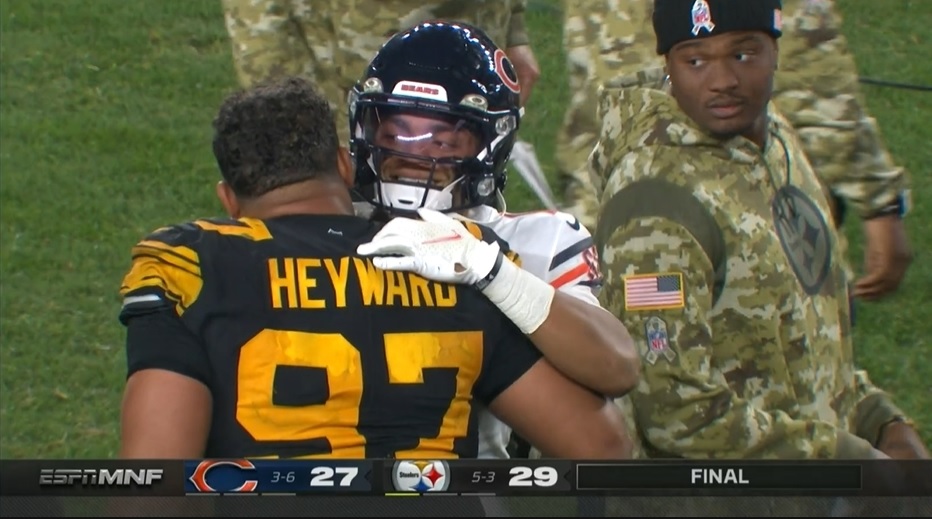 Something about playing on Monday Night Football brings out the best in Pittsburgh Steelers’ defensive lineman Cameron Heyward, who now has two career interceptions in primetime.

After picking off New York Giants’ quarterback Daniel Jones on Monday Night Football to open the 2020 season, Heyward got back into the interception column on Monday night against the Chicago Bears, picking off rookie quarterback Justin Fields in the first quarter, finally coming down with a tipped pass at the line of scrimmage.

Following the win over the Bears on Monday Night Football, Heyward — who also added three tackles and three quarterback hits defensively — stated that the Steelers have been working on tipping passes at the line of scrimmage all season, and that he’s glad he was able to help the defense force a turnover early on in the game.

“We were working on a drill on Wednesday. Me and a couple of the ball boys and the EQ guys and our strength coach,” Heyward said following the win to reporters, according to video via Steelers.com. “We did the drill, me getting my hands on the offensive player and then trying to catch the pick and then it pays off and,  practice really pays off.

“…I’ve been getting a lot of tips lately, and I just wanted to get a pick. We’ve been lacking in the turnover department. I feel like I figured I could help out.”

The interception helped set up the Steelers’ second score of the game to go up 14-0.

Later in the game the Steelers’ kick coverage unit forced a fumble on Chicago return man Jakeem Grant, giving the Steelers’ offense the football once again. Though the offense couldn’t do anything with the turnover, Heyward was pleased with the Steelers’ ability to force some turnovers on the night, which is something he hopes continues to play out down the stretch.

Fumble on the kickoff. Pierre forced it, Boswell recovered it #Steelers pic.twitter.com/kHFhcrvhPE

“Every game we have to go in the mindset that we gotta get turnovers,” Heyward said. “We got a turnover from James Pierre and Box [Chris Boswell] collected it, but we count that as a turnover as well. We need them from here on out. We know games aren’t going to be easy in the NFL; no game is a foregone conclusion. You need the field to flip multiple times in a game and a turnover or two is the best way to do that.”