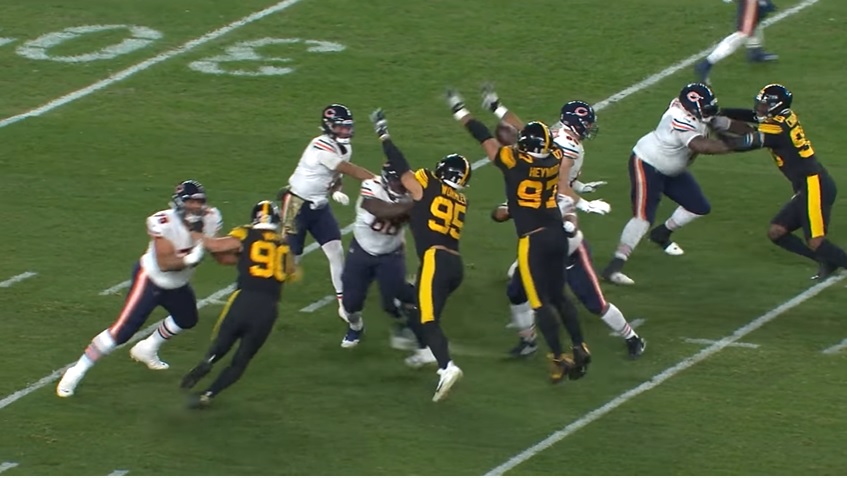 It’s become a familiar sight in 2021 for the Pittsburgh Steelers’ defensive line. As the quarterback gets set to throw the football, big, huge paws get up in passing lanes from the Steelers, leading to batted passes at the line of scrimmage, and in the case of Cameron Heyward in Week 9 against Justin Fields and the Chicago Bears — an interception.

For the Steelers in recent seasons, and especially in 2021, there’s been an emphasis placed on getting hands up at the line of scrimmage to disrupt passing lanes and help out the coverage on the back end. So far, that emphasis has had great success, as the Steelers are batting passes at the line of scrimmage consistently, and even making plays in the process, like Heyward’s interception that ultimately set up Pat Freiermuth’s first touchdown of the game on Monday night.

Not to be overlooked though is T.J. Watt’s batted pass late in the fourth quarter with the Bears attempting to drive for the game-winning field goal.

Watt batted down a Fields pass intended for Chicago tight end Cole Kmet along the sidelines, which would have given the Bears even better field position. Instead, Watt swatted the ball away, Cairo Santos missed a 65-yard field goal, and the Steelers improved to 5-3 on the season.

On Friday during his weekly media availability, Watt was asked about what goes into the success the Steelers are having at batting down passes at the line of scrimmage. For the All-Pro linebacker, it’s all about understanding the coverage on the back half and having an internal clock — much like a quarterback — to know when to stop the rush and get hands up.

“I think it’s kind of a combination of a lot of things,” Watt said to reporters regarding the success of batting passes, according to audio provided by the Steelers.”Knowing what kind of coverage you’re getting in the back end, knowing down and distance, formation structure to know it’s quick passes and stuff like that. And then it also comes down to just getting your eyes on the quarterback, rushing through the man. If you’re not really getting much traction and you have your internal clock, just like a quarterback does at, some point you have to just say screw the rush and just get your hands up.

“I think it’s kind of a combination of all those things that, there’s really not one thing that you can really pinpoint. There’s so much going on in a play in your head that all just kind of culminates into getting your hands a bit.”

Watt has mastered the technique, having batted down 29 passes through four and a half seasons, and has intercepted four passes in his career, two of which came at the line of scrimmage in 2020 against the New York Giants and the San Francisco 49ers. It’s become a real weapon for the Steelers, especially with Heyward adding into the mix, having batted down 21 of his 39 career pass breakups in the same four and a half year span as Watt.

With a secondary that has struggled in coverage at times, it helps to have two great players up front that have a knack for getting their hands on passes at the line of scrimmage, serving as extra coverage guys when not getting home to the quarterback.