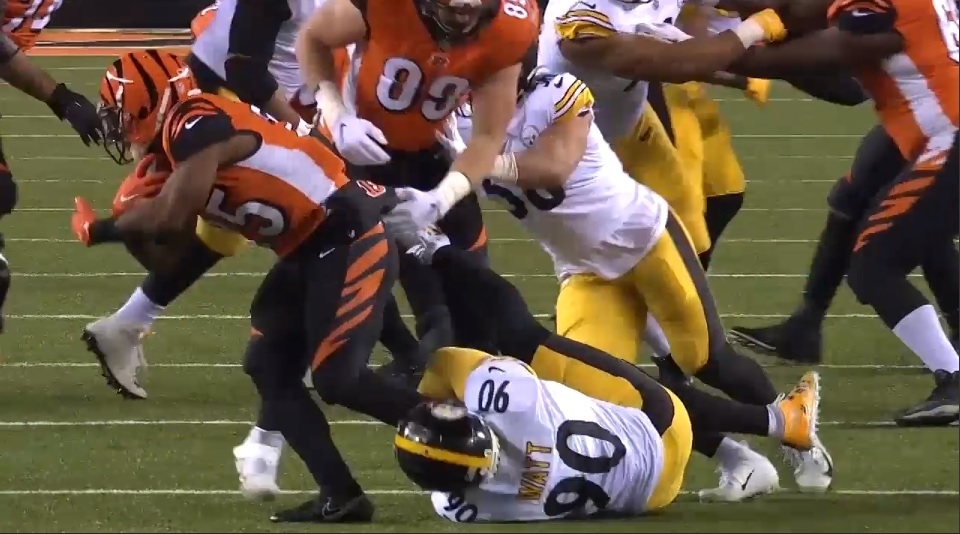 Pittsburgh Steelers’ star outside linebacker T.J. Watt wasn’t healthy and available for the Week 3 matchup against the Cincinnati Bengals at Heinz Field, which just so happened to coincide with the Steelers’ streak of at least one sack in a game ending with a whimper.

The Bengals certainly have a high-powered offensive attack led by second-year quarterback Joe Burrow and high-level running back Joe Mixon, along with a standout trio of receivers in rookie Ja’Marr Chase, Tyler Boyd and Tee Higgins.

Knowing how much fire power is on the other side of the ball for Sunday’s matchup, Watt is excited to play some AFC North football once again, this time against an improved offense and a vastly improved offensive line, making for quite the challenge for the Steelers’ defense.

“Yeah, I think even the offense line is much improved from what we’re used to seeing these past couple of years going against them,” Watt said when asked about the Bengals’ offense overall, according to video via Steelers.com. “They have a good right tackle matchup for me. They can run the ball. Joe Mixon is a really good running back. He can do a lot of things out of the backfield as well. And then you talk about the receiving core they have, and having a quarterback with another year under his belt in the system, they’re definitely starting to click.”

Things certainly are starting to click for the Bengals’ offense, which has scored 30+ points in four of the last five games.

Cincinnati continues to run the football very well with Mixon in the backfield, including a sensational performance in Week 11 on the road against the Raiders resulting in 130 yards and two touchdowns on 30 carries, while Burrow found Chase for yet another touchdown and really established a strong connection with Boyd once again.

Where Watt raises some eyebrows though is with his praise for Bengals right tackle Riley Reiff. Reiff is certainly an upgrade for the Bengals after so many years of Bobby Hart, whom Watt wore as a hat for the early part of his career. That said, there’s no real, true great matchup for Watt at this point in his career as he beats anyone and everyone.

Reiff has already allowed four sacks on the season and has posted a 69.9 grade from Pro Football Focus’s grading metrics.

Not only did the Bengals catch a break in Week 3 with no Watt, the Steelers were also without second-year pro Alex Highsmith. Both will play on Sunday, putting the Bengals’ improving offensive line to the test. We’ll see if the Steelers’ pass rush can affect the AFC North rematch.