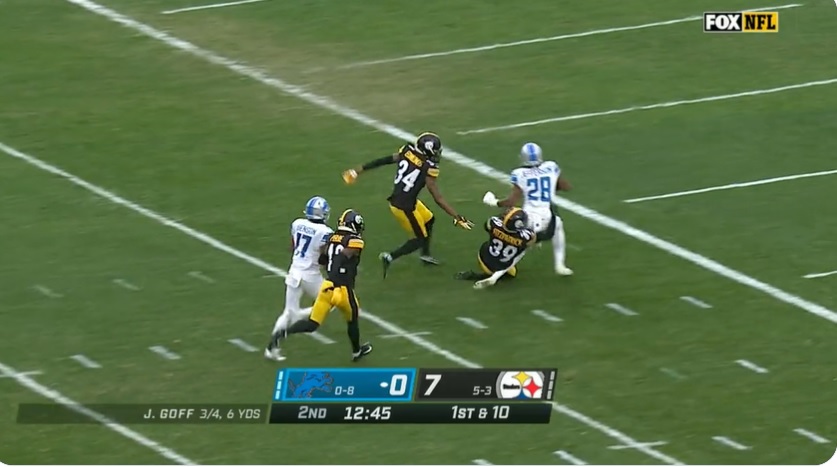 Winners and losers from the Pittsburgh Steelers 16-16 tie against the Detroit Lions’ Sunday afternoon.

Najee Harris: Harris continues to be the anchor of the Steelers’ offense, and they counted on him all the more in wet weather and without their starting quarterback. The run game focus falls on the Lions’ success and the Steelers’ defense lack thereof, but Harris ran hard while seeming to show more lateral quickness and the ability to make defenders miss. His pass protection today overall was impressive too, against Detroit’s blitzing linebackers.

Chris Boswell: A weekly visit to this list. He continues to make 50-yarders at Heinz Field look easy. They’re anything but. Especially on a windy, rainy day. Boz hit from 50 yards out to tie the game at 16. Credit to the operation, the snap and the hold, but Boz has the toughest job. And he does it week-in, week-out.

Tre Norwood: Norwood made a couple of key second half plays. Third down tackles, pass breakups, and it appears he had an elevated role in the Steelers’ nickel package over Arthur Maulet, though I’ll need to chart the defense today and tomorrow to confirm that fact. After focusing his role over the last six or so weeks, Norwood may be taking the next step.

J.C. Hassenauer & Joe Haeg: Not that it seemed like their play was exceptional, but credit to a couple of backup linemen stepping in and contributing. Haeg especially, filling in for Trai Turner at RG. Haeg has played very little, if any, at right guard this season, and he stepped in and looked like the vet he is. Had to on a day where B.J. Finney was inactive.

Run Defense: Horrible. High school-esque. And even that might be generous. It’s easy to pin the issues on one man. Devin Bush in particular is going to have a lot of criticism thrown his way. Some of that is of course fair (he was not good today), but big picture, no one on this defense could stop the run today. 11-man job, 11-man failure. Guys not in gaps, poor tackles, giving up the edge repeatedly, and guys not running to the ball like they should. Unacceptable in every sense of the word.

The good news is the run defense tightened up in the fourth quarter and they became a lot sounder. It helped the Lions showed zero threat or desire to throw the football. But the fact it got to that point is disturbing.

Danny Smith: Again, a broader brush approach here. The coverage units were poor today, including a 48-yard punt return allowed, but it speaks to the bigger, persistent issues this team has had on special teams. They’ve come on different units. Coverage, punting, and there have been a variety of problems over the last three games. Miles Killebrew’s running into the punter call was a costly one.

Ultimately, that all falls on Smith, who must get these units to play like they did the first month of the season. There’s too much negativity here, not isolated on just one man, that makes me put this on the coaching staff.

Red Zone Offense: Noted that it needed to be efficient Sunday against the Lions, who came into the game with a league-worst 83% red zone defense, allowing offenses to find the endzone 20 of 24 times. Pittsburgh was just 1/3 today. On one drive, with 1st and goal from the five, Najee Harris didn’t touch the ball on three straight plays, forcing Pittsburgh to settle for a field goal.

Mason Rudolph: Rudolph’s been worse, I suppose, and he marched Pittsburgh down the field for a touchdown his first drive. But it was all downhill from there. Passes sailed, others hung in the air too long, others were simply inaccurate. He relied on jump balls the Steelers didn’t win and did little to elevate the offense. His best contributions came with his feet, somehow running for 26 yards. But with Pittsburgh at Detroit’s 48 late in the fourth quarter, the Steelers gained two yards and punted, the ugliest series of the day. Understand he was in a tough spot getting the call Saturday night, but he’s not a rookie. What he is is a middling backup option. Nothing more.

Diontae Johnson: Fumble the ball away in overtime and you’ll get put on this list almost every single time. Johnson turned a big completion that could’ve led to the game-winning field goal but instead, had the ball knocked out by ex-Steeler Mark Gilbert and recovered by Detroit. Crucial turnover in a monster moment. The only good news is the Lions didn’t win the game on the ensuing possession, a 48-yard field goal that missed.

Pat Freiermuth: We’ve rightfully praised the trusty rookie time and time again. But he had the last joke in this comedy of errors game, not trying to get out of bounds on a running clock and then fumbling the football away with eight seconds left in overtime. Add in a rare drop, and this was an un-Freiermuth performance.