Today I wanted to look at some data for the season, discuss takeaways for the Pittsburgh Steelers week ten matchup against the Detroit Lions on Sunday afternoon, and pose some questions for you the readers.

First, let’s look at quarterbacks with the following data points: 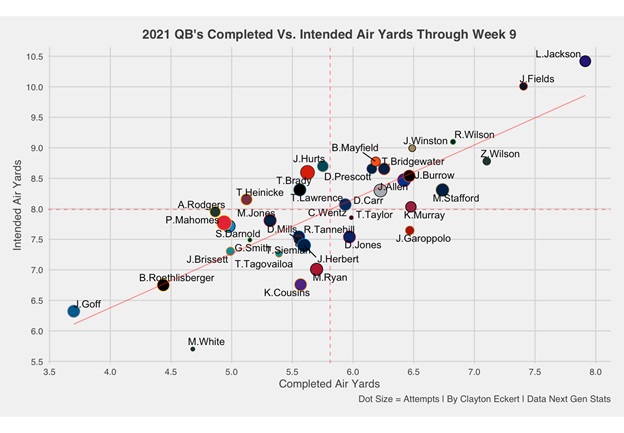 How do you think the quarterbacks will perform on Sunday? What are some of your favorite takeaways league-wide? 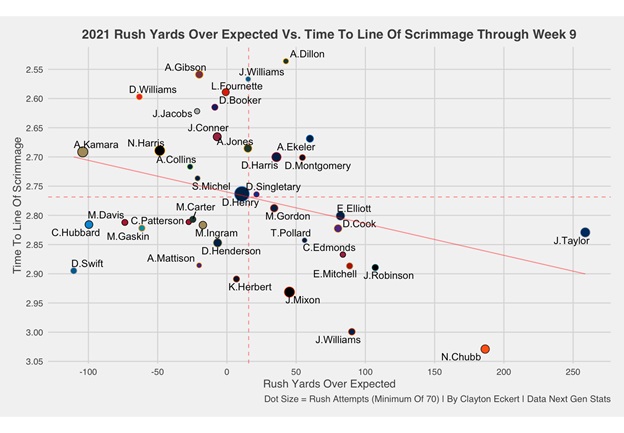 Lions running back Jamal Williams lands right at the mean for RYOE and at the top of the graph, highlighting his third fastest time to line of scrimmage number out of players with at least 70 attempts. This highlights his north/south running style, but he was ruled out on the Lions injury report for Sunday’s game. D’Andre Swift is the starting running back for the Lions and falls on the bottom left of the graph due to his lowest ranked RYOE in 2021 so far and the fifth lowest time to line of scrimmage number, highlighting the different styles of the Lions primary backs in the run game. He has been very effective in the passing game, and it will be very interesting to see how the Steelers defense fares against this challenge.

Steelers running back Najee Harris lands on the top left, with a time to line of scrimmage rank of 11th in 2021 thus far. Harris’ RYOE number came down after the lower yardage game against the Bears, bringing his rank down to the seventh lowest through week nine. He is tied for second in attempts with Bengals running back Joe Mixon at 150. Here’s to hoping he can have another 100+ yard game on the ground this week against the Lions, continue to get a high number of carries to keep the Steelers offense balanced, and hopefully see the offensive line bounce back from a down performance against Chicago.

How do you think the running backs will perform in this game? What about the offensive lines, considering Detroit may get tackle Taylor Decker back for the matchup? What are your favorite results league-wide?

Next let’s look at the Steelers and Lions wide receivers and tight ends using the following data points: 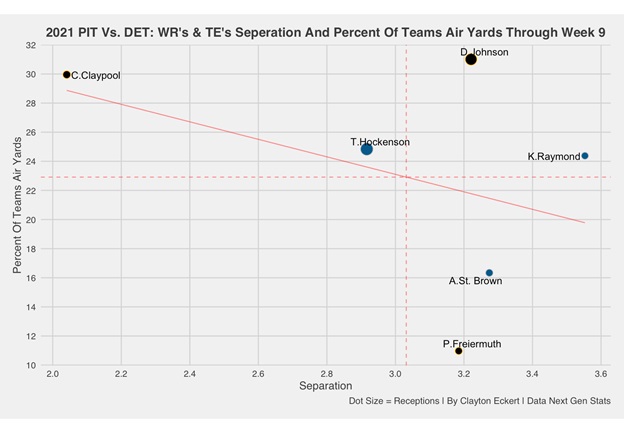 On the top right of the graph we see Steelers wide receiver Diontae Johnson leads the group in percent of teams air yards at 31%, a third ranked separation number, and ranks second in receptions with 45. Pittsburgh wide receiver Chase Claypool has the second highest percent of teams air yards at 29.96% and the lowest separation of the players by far at 2.04, an issue I have highlighted several times this season along with the lowest catch percentage on his 29 receptions. Claypool was ruled out for the game and will not play this week though, so it will be interesting to see how wide receivers James Washington and Ray-Ray McCloud are used and fare on Sunday, along with possible promotions to the 53-man roster the Steelers could make on Saturday. Pittsburgh tight end Pat Freiermuth is ranked fourth on the graph in separation and has the lowest percent of teams air yards, but more importantly he leads both teams with four touchdowns and best catch percentage on his 27 receptions!

Lions tight end T.J. Hockenson leads Detroit’s percent of teams air yards and has the most receptions of all players on the graph with 48, highlighting the need for the Steelers defense to limit him as much as possible. Detroit has lacked high end production at the receiver position throughout the season, so it will be interesting to see how they perform and how the target share pans out in this matchup. Lions wide receiver Kalif Raymond has the most separation on the graph, second most percent of teams air yards for the Lions on his 26 receptions, and a catch percentage of 65%. Detroit wide receiver Amon-Ra St. Brown has the second highest separation on 16.34 percent of teams air yards number on his 27 receptions, but a higher catch percentage of 71.05.

Which wide receivers do you think will excel in this game? How about tight ends? What are your favorite takeaways for the game on Sunday?

I also wanted to take a similar look at tight ends only, but league-wide using the following data points: 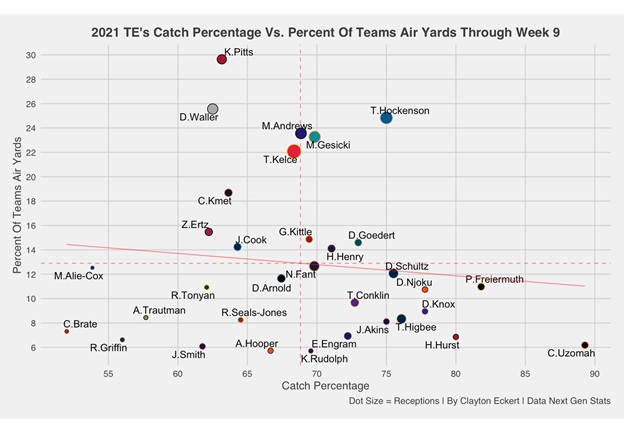 This view gives us more context to Hockenson’s season so far, landing on the top right of the graph with the third ranked percent of teams air yards out of all tight ends in the league. He also ranks eighth in catch percentage and second in receptions! Looking at Freiermuth’s results, he has the second ranked catch percentage along with a 17th percent of teams air yards rank and reception rank that ties for 14th.

What are your favorite results league-wide? 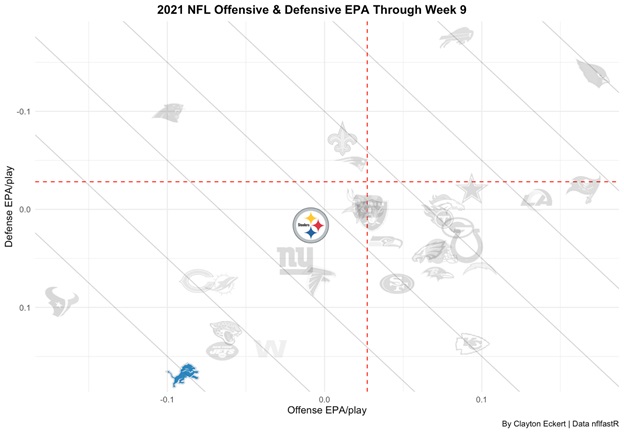 Right away we can see Detroit on the bottom left with the worst ranked defensive EPA in 2021 across the league and hopefully the Steelers offense can capitalize on that with a successful day in both the run and pass game. The Lions also have a low 30th rank in offensive EPA, so if the data holds true in the matchup we will hopefully see a strong performance from the Steelers defense and especially want to see them play more consistently throughout the entire game as opposed to the up and down results within a game as we have seen recently.

Pittsburgh is inching closer to the mean since I last checked the data points through week seven, currently ranking 23rd in offensive EPA along with a defensive EPA rank of 14th! It would be extremely encouraging moving forward to see this continue to trend upward against a team that many expect the Steelers to beat. Here’s to hoping the Steelers do not come out sluggish off of a short week and take care of business against a team coming off a bye week that could be easily overlooked with a 0-8 record.

What are your favorite takeaways for the matchup against the Lions?